There’s no way I have time to make a whole tileset. This is just a concept drawing, and a fair number of things would have to change for it to work as a set, too. However I’ve intentionally made it quite easy to work in, so that potentially if it were popular, it could become a community made tileset!

If you feel like tossing in an art piece, the basic rule is that no item should have more than 4-5 colours ideally (1 highlight, 1-2 midtones, 1 shade, 1 deep shade) and things should be a bit desaturated and dirty. Those are just guidelines, but give you an idea… Basically no smooth gradients, no imported cgi or photos.

Looks like Axel from Streets of Rage, minus the headband.

If you want evidence of why I stay on the code side of things, here you go. 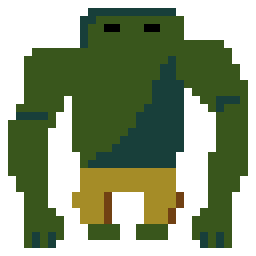 A whole tile set like that would actually be pretty dope.

Amazing job, man. I cannot draw, but I support the idea of a tileset like that. Especially if making layers of items and clothes is possible. That’s kinda standard now for tileset I like.

This should be final boss, the Kevin Hulk, found in a Kevin Shack, which is protected by Kevin Turrets 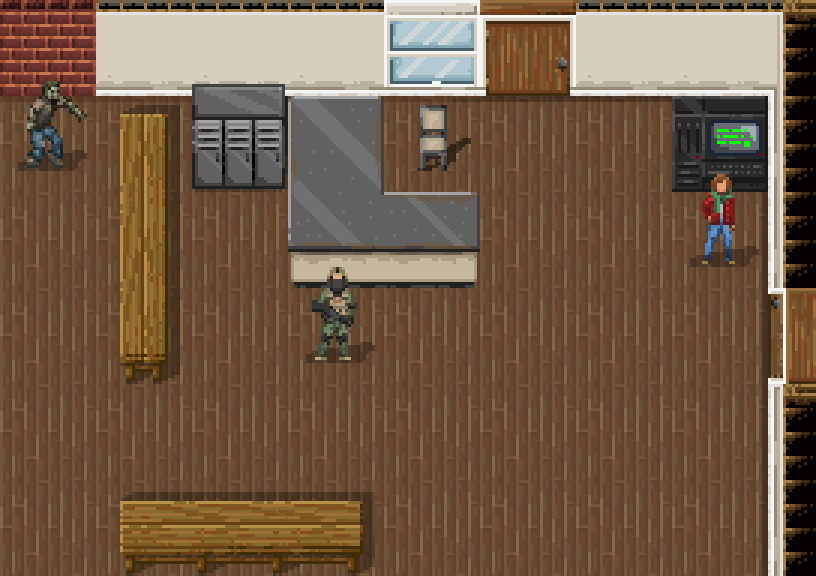 This is the current state of things. Human sprites by Fuji. There’s some work going on in better ways to render the sideways door…

Absolutely legit stuff! Making an early 90s game out of CATA, who could be opposed to that?

I’d like to help. Is here some git link, or something like that? I mean… It’s awesome! My drawing skills not really cool, but I’ll try.

Awesome. What would I use to attempt (and probably fail) to help with this? Maybe I shall help draw the texture of a beautiful piece of paper. It shall be a glorious piece of paper. Like a diamond, but flat. And made of dead tree flesh.
I really don’t know how any of this would work, neither what to draw the art in or how to give it to you properly.

I’m just setting up a GitHub right now, almost done. Until then you could always post here!

Okay then, what would be recommended to draw the pixel art in? Would photoshop work? (My dad bought a copy of it a long time ago, back before you needed subscriptions) I could just make it teeny tiny. So you can actually see the pixels.
I will probably also borrow Minecraft’s paper as a basis and somehow change it to make it more fitting. Or something. I dunno.

I do my pixel art in GIMP, but Photoshop is also good. Some people use paint but they’re crazy.

Physchopaths, using freakin’ paint.
I’ll take a look at GIMP later, once I have access to a computer, rather than just my phone. Then, I can also avoid autocorrect.
Thank you, I hope you will like the piece of paper I make for you. It shall be wonderous.
(PS, autocorrect just proved my point by changing ‘wonderous’ to ‘so serious,’ for some reason)

MSPaint is perfectly fine for pixel art, seeing as how at its most basic it is nothing but filling in grid squares one-by-one until the finished product looks the way you want it to look. Paint.net has more options and is overall just MSPaint on crack, plus it’s free and non-proprietary. I was never big-brained enough for GIMP and Photoshop, personally.

If you just want a pixel drawing in photoshop it’s actually really easy. Either zoom in a bunch, and/or make a teeny tiny page, only a few pixels wide.
There’s some much more complex stuff you can do, most of which I don’t know, but this part is simple. I used to know a bunch more, but it was so long ago I forgot how.
If only I didn’t somehow lose my ‘expertly’ made astronaut, garden gnome.
I guess it is true about paint if it’s just pixels. It’s crap for anything better than that in my experience.

I have now created a GitHub repository for this tileset. If you’re interested in adding stuff, it’s pretty early days so far - I am still working out some of the basic standards - but it’s not too early to try your hand at a few things. I would suggest that in particular monster sprites, item sprites, and floor tiles are something anyone could fiddle with now. Also any furniture tiles that don’t require connections. The stuff that connects is a bit harder, I’m still figuring out some of the standards there and then plan to make some templates, I recommend steering clear until we figure it out. Fuji is making the character sprites and I’ll get their layering info soon, until then they might be better to steer away from too.

If you’re intimidated by GitHub feel free to submit images here and I’ll add them or discuss them. However do look at the style guide on the GitHub front page.

Hope this provides a new and cool way for people who can’t code to contribute to Cataclysm!

Wait, I made my great and glorious piece of paper, but I don’t actually know how to give it to you on Github.
How exactly is that done?

EDIT: Also, I don’t understand some of your specifications, such as ‘pseudo-16 bit format.’
I also don’t know how to put stuff in the correct folders and whatnot. I simply just made my piece of paper.

EDIT 2: Where can I find the textures you made in Github in the files? I want to grab your zombie, then make it fat. If I can. Then, we can have a fat zombie.

EDIT 3: I have also made a ‘decent’ looking pig somehow. I’m not sure how, but I have. Surprisingly, it is better than just a pink blob, it actually looks like a pig. With shading and everything.