It’s been six years since I posted my last mod (Overmap Rebalancing). As parts of those got mainlined, I published my new and currently used mods on GitHub under the CC0 and made them available to everyone.

There are four at the moment:

I have some other mods in the working but those arn’t done atm. I will publish them when they are done or I’ll lose interest in finishing them. You can find all mods on my GitHub page. All contributions like constructive criticism, reporting bugs, sharing ideas for improvement and helpful PRs are always welcome!

I hope you enjoy those mods and appreciate your feedback!

A very simple mod called “NoAchievementBlockers” that removes the new implemented achievement requirements for four starting scenarios (“Challenge - Lab Staff”, “Challenge - Lab Patient”, “Ambush” and “The Next Sommer”) as there seems to be no way atm. to disable this behaviour.

There are in fact two: 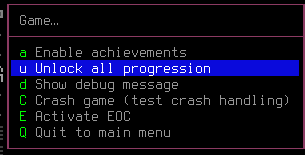