I really like the prison break scenario. But so far the only reliable way to escape that i see is to craft a crowbar (or lockpick, etc. keyword is “to craft”) and pry open bars. But you can’t make makeshift crowbar in darkness. These is limiting your escape chances by chances that you’ll find a light source.

I suggest to make a crowbar craftable in darkness, or place some light source in prison (accesible to player without crowbar).

A crowbar is a reliable way, sure. I’m not sure if you want your way or want suggestions.

Without giving you spoilers I’d say crowbars are not the only thing that can open the door and there is light available in the prison, in fact, there are multiple sources of light depending on RNG and at least one reliable source that I believe is guaranteed.

The challenge, for me anyway, with the prison scenario is getting TO the sources of light in safety.

there is light available in the prison

Where? You start (most of the times) in basement. There is no light sources except random flashlight which is… you know… random.

I have been playing CDDA for years and i think of myself as a quite experienced player. So what are this secret other ways to open doors which i can use/craft in complete darkness?

Basically these no-light problem can be applied to almost any other way of breaking out.

Okay, spoilers ahead. I still think you should fuss around a little more on your own, though.

The doors. Wood doors can be bashed with 2x4s if you have the strength. Main, barred doors can be opened with a crowbar or lockpick, those are the two I know.

Light There is a visiting area adjacent to where you find the exit on the main floor. Standing at the glass divider provides enough light to craft by if it is day outside. You can also find fire-starting material on zombies and I believe I saw a youtuber find a flashlight, which can be used to create light in the prison. Obviously you should be cautious with starting a fire indoors.

There is indeed a light source in visiting area, but the chances you’ll get there are again pure random. The room is too small and the robots will hear you bashing the door. The only chance is that they’ll waste all ammo on zeds. And again this is a random.

Take the lab escape as an example (aside from broken mapgen) there is all the chances to escape the lab. You can craft something or disctract robots by throwing something (there is always a key card in the lab). Rng influence is minimal. But in prison breake you should pray all the gods that robots on your way to visiting area will waste all thier ammo.

Also you’ll need a light to craft a lockpick, so how does your “spoiler” solves this problem?

PS: I said i have been playing this game for years. Lockpicks and visiting area are not spoilers for me)

PPS: Yeah, about a fire… This is still random, cause you may not find a matches/lighter/flare etc… 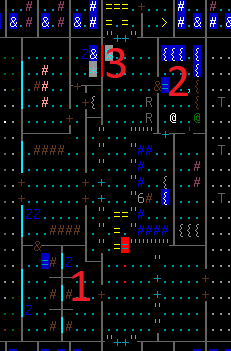 The only way to access a visiting area (1) is through this staircase (2) (assuming you have no lockpicks/crowbar). There are two robots on your way. I can think only on two options of avoiding them:

Both of them are pure random. The room is too small to reliably draw them into the corner by throwing items.

This isn’t a puzzle game, there are scenarios with no solution. If you don’t like the potential for some of the scenarios to be unwinnable, don’t play them.

Honestly though, the game is much better if we try to give solutions to every scenario, even if they are not obvious or really hard.

It seems this one could be fixed by a guaranteed flashlight somewhere hard to reach.

I mean what is the point of a scenario that is a short and pure RNG based deathtrap.

Honestly though, the game is much better if we try to give solutions to every scenario, even if they are not obvious or really hard.

There are solutions, they just aren’t guaranteed winnable.

I mean what is the point of a scenario that is a short and pure RNG based deathtrap.

It’s a learning experience, just like any other scenario. Maybe the thing you’re learning is that life isn’t always fair and sometimes you never had a chance in the first place. Maybe the point is that you reject that and insist on finding a way despite all odds.

It seems this one could be fixed by guaranteed a flashlight somewhere hard to reach.

I’m shooting down the crowbar crafting change based on the lack of merits, if someone wants to PR reasonable adjustments to the scenario itself I’m neutral. Having a flashlight stashed somewhere is a totally reasonable option.

It is not that easy for a con to break away from prison especially during zombie apocalypse.

You make a very good point.

Don’t forget robots will only shoot you if the can see you. Most of the exits have furniture and furniture at least for the moment is always craftable.

PS: I said i have been playing this game for years. Lockpicks and visiting area are not spoilers for me)

I was more thinking about the other people who would google this exact thing in the future who may or may not want spoilers. And you were obviously asking questions so it sure seemed like it might be spoilery.

Both of them are pure random. The room is too small to reliably draw them into the corner by throwing items.

I reliably walk right past them without incident. It doesn’t require RNG so much as waiting and watching patiently, which is exactly what you’d do if you actually found yourself in that situation. I don’t think it was out of bullets last time, I’m pretty sure I just walked by on the outskirts of its vision.

I don’t think the prison break scenario needs revision, except maybe to expand layouts of the actual building. It isn’t impossible, and in my opinion is one of the easiest of the ‘big building’ starts.

This isn’t a puzzle game, there are scenarios with no solution. If you don’t like the potential for some of the scenarios to be unwinnable, don’t play them.

So why you (devs) placed a guaranteed key card at the bottom of the lab?

Basically now player needs to restart the scenario until he’ll get all the cards right. So why don’t just skip that part by placing a lightsource somwhere in the basment?

Btw, this will make this scenario far more fun, cause this will grant player an access to all other areas of the prison.

PS: Maybe you misunderstood me. I do not want to have exactly a crowbar in the prison, i am talking about an opportunity to craft something.

PPS: DeWolf gave me a great advise, maybe i should test it out before whining about bad rng.

TheMurderUnicorn, i had replayed this scenario before answering about ten times and only once i got past these robots without turning into a sieve (i got lucky and they got stuck in the corner).

in my opinion is one of the easiest of the ‘big building’ starts.

Yes, i agree. I just reroll the scenario until i find a lightsource. And then it’s easy to escape through the main entrance. But i’m talking about a roll when you can’t find a lightsource. Looking at a lab escape scenario i thought that devs want every scenario to be playable no matter the chances.

DeWolf, hey, great idea, never thought about it. Maybe this is doable afterall.

I patiently tried dozens of times to get past that two robots in this room by moving bookcases around and (got a sokoban black belt) failed every time.

But after resetting the world i found only one robot in the same room and easily fooled him by moving furniture.

So i admit that it is indeed possible with not so many luck to reach lightsource and that i just was not cunning enough to find the way.

But i still think that adding a lightsource in the basment would only benefit this scenario scince the number of robots spawned in entrence area looks random (from three to one).

Well it help if 1 you know roughly where the robots are (kinda defeats the point if you are going to get shot in the back) and to make while doing so you are sprinting to reduce the robot’s opportunity to shoot you as much as possible.

It’s easy to predict a robot position if there is only one of them, but with multiple robots things gets complicated (especially because they are attracted by the sound of moving furniture).

Also i can always tell that they are somwere on the other side of bookcase from me (or in my field of view, if i drag bookcase behind me).