So I was wondering if current game mechanics could support weapons systems which a player could carry, but not necessarily fire from the shoulder. You would have to deploy them like a piece of furniture in order to fire them, and repack them for transport.
Some prime (and awesome) examples of this would be: 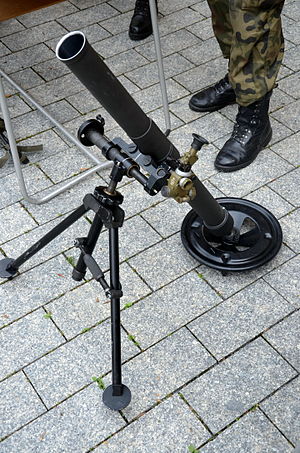 A mortar is usually a simple, lightweight, man portable, muzzle-loaded weapon, consisting of a smooth-bore metal tube fixed to a base plate (to absorb recoil) with a lightweight bipod mount and a sight. They launch explosive shells in high-arcing ballistic trajectories. Mortars are typically used as indirect fire weapons for close fire support with a variety of ammunition. Mortars have been used for hundreds of years, originally in siege warfare. Many historians consider the first mortars to hav... 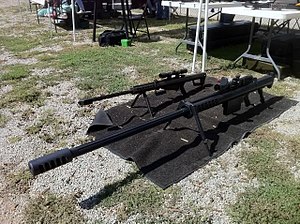 The Anzio 20mm rifle is an American anti-materiel rifle designed and marketed by Anzio Iron Works. It is the first American anti-materiel rifle designed and mass-produced for public sale with a bore diameter in excess of .50 caliber in over 80 years. The rifles are available in three calibers, with the rifle's predominant chambering being the 20mm Vulcan caliber. Other notable features include an optional three-round detachable box magazine, a 49-inch (1.2 m) barrel, and threaded muzzle to accep...

I like the idea of a mortar actually. Especially if i can get incindiary shells so I can burn the fungal blooms from sweet sweet safety.

I imagine it should be doable in some manner.

Large hordes of zombies would be good targets as well. Especially if you can tell an NPC over the radio to operate the mortar:

The 20mm rifle would be good for having sniper support from long range, or if they ever implement an enemy big and bad enough that it takes coordinated and careful teamwork with heavily armed NPCs to kill.

I would love having a monster that necessitates using combined arms tactics to kill the thing. Like a massive mutant creature or something rampaging about while 20 NPCs with machine guns and grenade launchers unload on it, and the player is hitting it with tank rounds or something.

This kind of thing is very possible, basically you’d have an item that doesn’t act like a gun at all, it only gets activated to place it on the ground adjacent to your character, then you interact with it to fire it.

For a mortar, what level of authenticity would you need?

I’m really hoping the answer isn’t “make the projectile able to travel through multiple z-levels & be able to hit tall buildings that are in the way”.

Because I haven’t the faintest idea how to do that.

At the moment, checking for a roof over the target and destination would be sufficient. 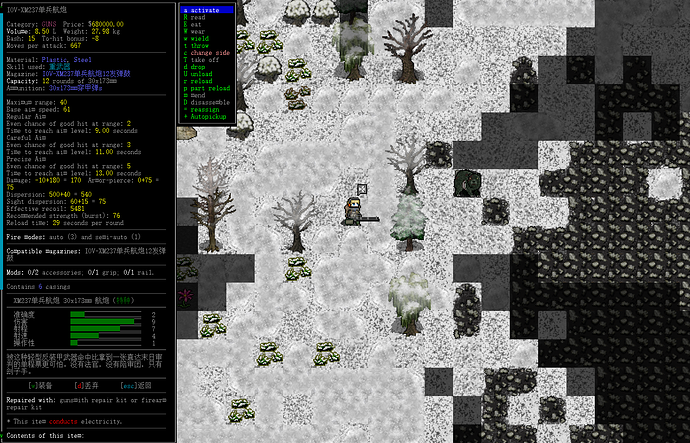 Do you have it in english? Also. Firing from the hip or carrying seems unrealistic.

The average person just being able to carry one of these firearms seems a stretch as an person could do serious damage from the strain. Pulled ligaments and muscle and tendons can take weeks or months to heal.

Then how do you explain heavy gun teams? Or mortar crews? One of those guys is carrying the gun the others the ammo. I mean a basic mortar is fairly light it’s literally just a aiming tube just like an RPG just a tube for your projectile. And mortars most definitely can be fired from the hip admittedly not very accurately. As can other heavy weapons even 50 cal machine guns can be fired from the hip (hint it will suck so much and which is why they make a rig for it). Now if we are talking about artillery that changes things as those are not able to be picked up or moved by one man (aiming is easier though) as those things weigh more than the crews in most cases.

I was thinking about making a recipe for a tripod mounted minigun you would unpack and set up. Recipe would require 1 minigun and some scrap metal or chunks of steel. No way you could carry one of those things around and shoot them with any kind of accuracy, and apart from the vibration and recoil, you would probably hurt yourself.

Mortars would not be something you could deploy while being chased by a zombie horde. It would take long enough that you would have to set it up beforehand. Or have an NPC do it once radios are implemented, then call down fire.

It can be done. It isn’t accurate by any standard of the word and is SUPER dangerous but it can be done just got to be clever about (note it can blowup in your face). You can also use mortar shells has hand grenades but not vice versa. And you can also fire the shells from pretty much any metal tube with the correct modifications but it would be risky (that’s what a mortar is same with an RPG launcher). Also mortars are not precise enough for targeted blasting it’s more of somewhere over-thereish if you want accuracy you want artillery like a catapult or howitzer both are equally good in terms of accuracy in the hand of the right team. Also something that should be taken into account mechanics skill should be the one for determining accuracy

I was aware that mortar shells can be used as hand grenades, but that really only works for SMALL mortar shells. For larger ones its not practical, they are too big to throw.

And you would have to be crazy to shoot a mortar from the hip, I imagine it would be only slightly more survivable than trying to suck-start a 12 gauge.

I think you are mistaking mortars and artillery mortars are portable without a machine or the entire crew and artillery is bigger bigger shells bigger barrel bigger AND better aiming tools. The reason I say this is you mentioned bigger mortar shells. Those are most likely artillery shells and operate on a gun type mechanism (gunpowder) while mortar shells if I remember correctly work on spring tension might be mistaken on that part, but I do know they don’t use gun powder (no flash from them).
Also question what skill are you planning to use for the mortar/artillery/heavy weapons setup speed and firing speed and accuracy?

Also question what skill are you planning to use for the mortar/artillery/heavy weapons setup speed and firing speed and accuracy?

I don’t even know if I’m going to make this. It was just a proposal. It might be something I will try later. I think Launcher skill would be dominant. Maybe modified by mechanics.

That would give the launcher skill a easy way to train same with mechanics.
But anything can be thrown if you put your mind to it and with the right tools or help might not go far though.

Feel free to correct my math, but taking the M2 as reference 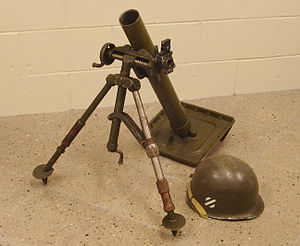 The M2 Mortar is a 60 millimeter smoothbore, muzzle-loading, high-angle-of-fire weapon used by U.S. forces in World War II, the Korean War, and the Vietnam War for light infantry support. The U.S. M2 60 mm mortar was developed from the heavier 81 mm M1 Mortar to provide a lighter-weight alternative to company-level fire support. The M2 attempted to bridge the gap between the 81 mm mortar and the hand grenade. Normally employed by the weapons platoon of a U.S. infantry company, the M2 is of the...

For comparison, this article cites the .950 JDJ as the world’s most powerful rifle cartridge
https://www.wideopenspaces.com/big-gun-big-fun-shooting-worlds-largest-rifle-video/
it exerts 277 ft-lbs of force a little over a tenth the force the mortar would exert. The mortar would kick 10 times harder.

Still can be hip fired. Might be really bad for your health but it can be done. Besides that if you were clever you could make a rig they do it for heavy machine guns and certain other weapons but those guns are typically fired by a second person.
Which lends an interesting idea for NPCs making them a mobile gun platform for certain weapons (IE can’t put a tank cannon or something equally silly) and would be whole dependent on the weight the character can carry so a 20 strength guy can probably have that mortar strapped on him no problem but a 4 strength guy probably can’t even have a smg mounted for example. With this you could probably get accuracy buffs for high rate of fire weapons like a machine gun or laser gun or something or you could mount a reactor on one and a gun on another the applications are endless.

Yeah, if I make this, mortar is not going to be wieldable, except to beat someone over the head with the tube. You MIGHT be able to throw the mortar rounds like grenades though if its the 60mm mortar. I was thinking it would either be this: 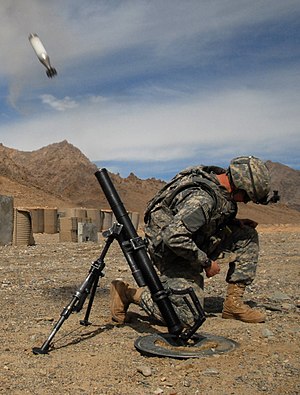 The M224 60 mm Lightweight Mortar is a smooth bore, muzzle-loading, high-angle-of-fire weapon used for close-in support of ground troops. It was deployed extensively in the War in Afghanistan by the United States. The M224 system is composed of the The mount consists of a bipod and a base plate, which is provided with screw type elevating and traversing mechanisms to elevate/traverse the mortar. The M64A1 sight unit is attached to the bipod mount. The mortar can be fired in the conventional mod... 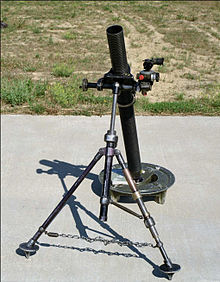 The M29 is an American-produced 81 millimeter mortar. It began replacing the M1 mortar in U.S. service in 1952 being lighter and with greater range. It was subsequently replaced by the M252 mortar in 1987. Variants included the M29E1 and M29A1, adopted in 1964. These were produced with a hard chrome-plated bore to prolong barrel life and ease of cleaning. The maximum rate of fire is 30 rounds for the first minute followed by 4 to 12 rounds per additional minute. The range is 5,140 yards. The wea...

Is there a way to make furniture take up multiple tiles? That 20mm anti-armor rifle is a monster, and should rightly take up a bit of space.