Hey, as im extremely newbie to github, i wanted to share the progress of the mod to all of you.

This was only a little item tweak, adding some armors, but ideas came and things blown up with people feedback, so ill try to make something better, and with a lot more of content, backed with a graphical improve of the game with a tileset.

r/cataclysmdda - Im creating a new mod w/tileset, i hope you like what im...

You can click there to see the imgur where im posting images, being a default user here dont let post my own

When will you finish this?

Is this hard to code?

Are you planning to include more things?
Yeah, and im totally open to new ideas! Thats why i posted this here

I hope you like this, and please, comment everything you think is Ok or not, and give me more ideas!

(Sorry if i wrote something wrong, english can be tricky sometimes)

MOD ON HIATUS - Will retake it soon™

Dunno if you’re aware, but most of the power armor stuff is hardcode, so you’re somewhat limited in what you can JSON up.

That said, I have a bit of a power armor mod of my own in the works, so I’ll let you know how it works out.

Yeah checked that and internally cried, was planning on creating this kind of PA as regular items.

Will be glad if you share what you can

Maybe add more real life stuff… Thats litterly everywhere but not in game, maybe penicils, sharpeners, and multystory buildings, the raincollection things on roof who transport rainwater to thr ground, witch i feel is VERY important… Seriusly, its like the worlds hugest funnel and your bottle fills up in 10 sec

There are already mods that add a few multistory buildings, but Z levels don’t work all that well so they’re not very good. Random clutter is usually boring in a game, especially when tile based.
Having rainwater collection on roofs would be horribly complicated, and couldn’t be done in JSON.

That’s really not the intention of this mod. Have you considered making your own mod? You could add whatever you want.

Yes… I tried but am on mobile, and i have no mods that have something that functions like a writingz becose i make my mod py copying, renaming/changing becose i can’t code, and i Don’t have anything to copy for pencils… So… The mod i made just… Doesn’t work

I absolutely love your pixel art! If you make a whole tile set in that style and quality I will probably never use any other tile set ever again. (Don’t get me wrong, the existing tile sets are great; I’m just a huge fan of this pixel art style.)

Also sounds like you’ve got a lot of really cool ideas for game content and stuff. With so many different ideas, it might be a good idea to put some things into separate mods where possible. That way people can (for example) use your power armor without adding other things.

Either way, I’ll be looking forward to seeing your progress on this!

This looks awesome! Would love to see a whole tileset in this style.

HYDROPONICS
Biggest problem about living in a subterranean base is that you need to go out for fresh food, and its pretty difficult to get some veggies without time and terrain.
If conditions go worse, you wont even get any veggie from your plantation, so i though 2 posibilities
1- greenhouse
2- hydroponics
Maybe i create some kind of greenhouse that protects your delicious tomatoes from acid raind (or something worse) but for now… atomic self-sustained hydroponics that renew every season.
Pros: Renewable food source, light source (low)
Cons: Very expensive (mid-late game), pieces difficult to find
https://i.imgur.com/JB6L8Q2.png
_ First is 2 tiles tall hidro, discarded because it blocks viibility, but will try to recycle it. Rest is 48x32 tiles_
_ 2nd is empty but functional_
_ 3rd is growing _
_ 4th is veggie/fruit related (lot of different random loot)_
_ 5th is for weath and corn_
_ 6th … obviously broken, maybe repairable_
_ 7th 8th 9th is intended for little trees and bushes (bonsai-style harvesting)_

TERRAIN
This can be tricky cause i dont have experience, but thanks to acidia i found a way to “decrease” time and effort for this.
Creating schemes, and testing ingame, still only a light wip
https://imgur.com/a/vvZNXqB

EDITS - ROBOTS, ZOMBIES AND MORE
Giving more style to some bots, more in the scifi fashion (mod oriented), less sexualized in some cases, and some cool aditions for a new type of enemy that will haunt your cataclysmic dreams
https://i.imgur.com/6Yaa9OX.png

And yes, ill try to give more “height” to wall tiles, so they are 2 or 1,5 normal tile heigh, just making more visual appealing to the game without interfering with gameplay

Looking awesome so far! I haven’t quite gotten to my PA experimentation, but I hope to soon.

Thanks! I dont post the “testing” stuff (wich consist basically in flat colour things) or the json coding (boring, and its nearly the same as you can find in other objects, hydro are basic a rip-off of trees with some tweaks xD)

higher the “weight” parameter, higher chance of this tile being used

sadly, this funcion do not work if tile is “connecting” with it self (uses tiles for corners, edges and stuff)

Its part of the new tileset, im adding female counterparts to some zombies so there is more variety
(For example, here the “elegant dress” female zombie has less “weight” than the ponytail female zombie") 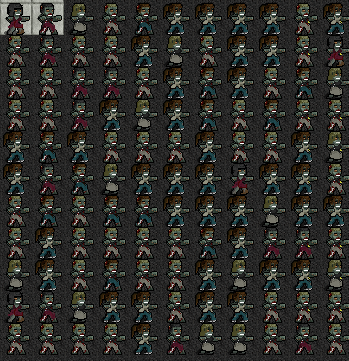 At least we have a great quote SDG…

Life is hard, time is short

Im finishing my career so this is frozen for now xD