The issue of Kev Jong-Un

Basically what happened is simple, a smidge of backstory.

A month ago a competent coder made a small but useful code chang, for improving code quality. There was no content thst could be refuted, no changes that could be opinionable, it was a single code improvement.
Said code change was refuted on the basis that it was not approved by el grande enchilada, the of of the known realms, also known as Camp Granada. The reasons are still unknown, but may be boiled down to “no, because not.”
You can find the pull request here.

Use CXX11 pseudo-random engine and distributions for all RNG

The code change was blocked for a month by kevin alone until the coder decided to give up and point the fact, 4 days ago. Here’s the final excerpt. 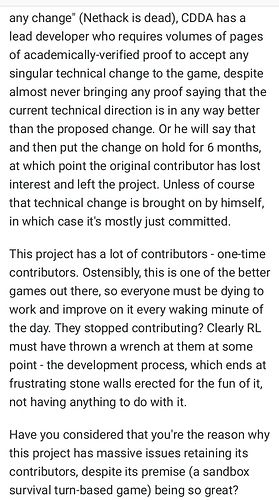 To that, in a feeling of comradeship (I completely agree with him, as it has been self evident for a long time) I replied him in a propaganda style very fitting with the dictatorship vibes I got from the “discussion”, with this.

Now that the dust has settled, who was in the wrong here?

it’s probably because it seems like you’re shitposting in a serious github discussion that should only be relevant to code.

You know what? It’s okay.
Anyone with half a brain can see how things work around here.

I’ll show myself out.

If someone wants to have a civil discussion they’re free to, but resorting to insulting Kevin hasn’t ever gotten anyone anywhere.

People that ignore basic social etiquette over a change to angrily rant at the lead dev probably aren’t following a reasonable code of conduct to, given that the blame for everything is put onto Kevin.
Angry rants are for reddit, or you can discuss your issues with kevin on the discord, there are times and places.

But I didn’t write an angry rant. I posted 3 lines replying to an angry “rant” saying to not lose hope because someone is making a fork.

To be fair kevin is a bit of a jerk

To me it came across as a shitpost more than anything and implying that this project is somehow being destroyed by Kevin, it wasn’t constructive nor kind if one has reading comprehension.

Implying the project is being destroyed by kevin

eh, he’s allowed to be one, this thing would be an unoptimised mess without him, lots of features go a long time without being merged to ensure they’re stable, and while we sometimes have issues like we did with freezing, Kevin does ensure that only things that have been tested to be functional within the test circumstances (it’s up to us to find the rest of the bugs as with any project, as gameplay styles will vary and therefore we’ll bump into more different contexts) and beneficial to realism/the intent of the game are merged.

If you don’t have something constructive to say on github, don’t post it, github is not the forum.
If you’re trying to encourage someone and praise them, just do that.

I mean, we could be discussing about how I don’t think that is true, and I know I am defaulting by saying this, but I’m just going to say that based on my experience I disagree with you.
You have your view of this project and I have mine, but what I’m saying is that banning someone for confirming something that has just been said one post before is pretty off the rails.
That said I am not going to defend my statement because that’s a lot of work for no real gain, so basically I’m just trying to get a message out there.

You weren’t banned for

confirming something that has just been said one post before

You were banned for spamming github.

In an open project a person with authority to hold or force changes is needed if it is meant to go anywhere, even if not every single one of his decisions is correct in retrospect. It is easy to judge after the fact. I’ve seen how derailed projects can become if there is no “evil dictator”.

Also please try to understand that everyone here is just a human (or at least I hope so), with their own day-to-day responsibilities, problems and a limit to how much they can take before letting emotions get better of them. I can understand how your github comment might rub Kevin the wrong way, if it was the actual reason, and obviously there should be a better way of clearly communicating that other than banning you, again back to “only human” point that goes both ways.

What is important in my opinion is to try to remain calm, or give yourself a time to calm down, and try to talk it out, not necessarily with a torch and pitchfork in hand, as I do believe everyone here wants the best for this game even if we see things in different light sometimes.

I don’t get your message. “a mad drunken slav” is a rant, plain and simple.

I read it, several times. I want to get it, but I fail to see how any of it is really relevant to the discussion at hand. It seems aggressive and opinionated. And the last sentence of “he is trying” is ambiguous. He who?

Definition of spam is “irrelevant or inappropriate messages sent on the internet to a large number of recipients” and that one snippet you posted, where the rules are clear, is spam.

From what I see, the PR contains two changes: One, changing int out for a long, on the basis that it’s more consistent with the functions being used, which is true enough, but it’s simultaneously less consistent with CDDA’s codebase, which uses ints all over the place. I suppose this sates Muffin’s personal sense of order, but doesn’t fix anything and as jbytheway points out, may cause problems on some platforms. I don’t see a pressing need for that change, but it’s also a minor detail.

The big change is to swap out the RNG to a mersenne twister, on what I can only see as the blind ass-pull assumption that the RNG is causing slowness. I gotta say, Kevin’s absolutely right on this, the right way to fix slowness is to first profile your code and figure out where the problem actually is. (In my experience, it’s often in a place you never would have guessed.) Then having identified it, you can work on the actual source of the problem without wasting time and potentially introducing bugs by working on things that won’t help.
Just throwing popular algorithms into your codebase willy-nilly because somebody told you they were fast, and hoping for the best, is absolutely the wrong way to go about optimization.
Asking for benchmarks to show that this would help isn’t exactly a high bar to hurdle, either. Any n00b coder with an afternoon free can run a benchmark. It’s not rocket science or even a big ask. Maybe the mersenne twister would help, maybe not, but we don’t know without some numbers to show what it will do.

Besides all of that, if you think that post of yours wasn’t insulting or likely to result in censure, you’ve got way bigger problems than your buddy’s PR getting denied.

I don’t see the point in this discussion.

As far as I’m aware, Kevin owns the repository. If I were running a project, even if it were open source, I can choose who I want involved and who I want to ban. So long as Kevin isn’t being racist or sexist or being blatantly offensive in some way, he can do whatever he wants.

If you were banned, and you felt it was wrongful, and you came to the forum with ‘Hey, uhm, I got banned from the repository and I kinda want to talk about it? I didn’t mean to upset anyone, I thought I was helping’, then I believe 100% there’d be a conversation about it. At the very least you’d get a more detailed explanation and if you had the right attitude I would think the ban might even be lifted.

But when you come to the forum with a thread comparing Kevin to a North Korean dictator, and use aggressive language. . . It doesn’t even merit a discussion. This person’s post has taken their ban and proven it entirely justified.

Kevin can be a jerk certainly, despite me usually agreeing with him, CDDA has had a stable codebase for so long largely because of his efforts. Despite this being open source there needs to be a firm hand or it just falls apart. Nothing I can really add that won’t make it sound like an echo chamber, but I don’t think any of this will sway anyone’s opinion in any case.

As another reminder though. Wales himself was waaay more of an asshole. I think Cataclysm is just one of those things that needs an asshole at the helm.

Kevin is infinitely more approachable on the Discord. Try there and actually try to be civil. I was amazed
how much easier it was to talk to him there.

I can understand your concern, yes, but unless you seriously want to try to vote Kevin out of his leadership role and potentially tear the entire project apart, I suggest you don’t take the “blow it apart” approach.

Nobody needs to be an asshole to be a good leader. Because we(the use base) can disagree with him doesn’t make either side an asshole.Good arguing/debating is great actually. Disagreeing and flippantly brushing people off in a logical and/or reasonable discussion, stating “I’m right because I say so” as the basis for ones conjecture in an open game…that usually ruffles my feathers.

Perhaps in a few days. Things may not be too bad and Kevin may lift their ban. I thought “Kev Jong-Un” title was silly yet amusing. But then again I was’t the target so…

edit:
Re-read my post. I am not throwing you under the bus. I was speaking in generic terms of any leader. As for Kevin specifically. I think he has been both reasonable AND unreasonable. Everyone has a crap day now and again.