so… what the hell is up with the scorching heat? i can deal with the mi-gos (kinda) but the heat is really a problem. like 7 turns inside and i get severe pain and scorching heat… i have to back out and use nano to heal.

There are (naked) people inside and there is a chance to get them with a sledgy but how can i? help? 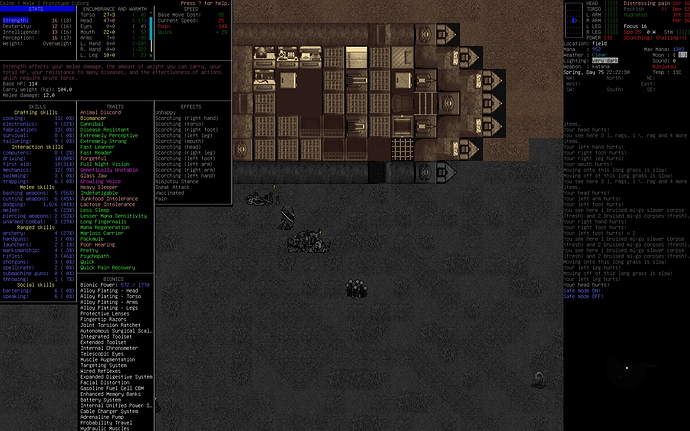 How can we know those are not glamours conjured up by inter-galactic predators?

You seem to be a capable mechanic with your doom bus. Install a draggable single-tile air cooling machine. Make it two tiles long with two coolers if the heat is still too much.

Thank you, her name is Tania. Like my ex she destroys everything in her path .
but what do u mean Air cooling? is that a mod? all i can see is Cooler and thats not it… right?

Yes. Once turned on it’ll cool a space of air around it. Drag it around with you inside the tower to stay cool. Make sure it has enough power. Same goes for the heater but in reverse.

It’s a vehicle construct, just in case you didn’t know.

awesome. thanks man ill go ahead and do that. hmm since ill have to drag it around that means ill need battery and controls too since a cable will snap… but what about the other floors? never tried dragging something up a level

I don’t think you can drag something up a floor. If you cannot build a folding cooling vehicle you’ll have to brave them, or get the internal climate control cbm to keep relatively cool temporarily. Thermal dissipation only really helps with not burning from fire or lava in my experience.

got it, i do have a folding frame handi mostly for boom. but that means that by the time ill install everything ill be already fried to a crisp. so ill go raid another lad since i didint know that that cbm existed.

thanks allot man got me several options

Frustratingly, the resin floors block movement, so you can’t place it once, then move it around, you have to re-place it (and reinstall the cooler) for every square you jackhammer from.

I was also having a really frustrating time getting the prisoners to follow me out. It seemed like they were getting stopped by the clouds. My plan next is just to tell them to travel to basecamp, then go out of the reality bubble for a while and see if they end up there, because I don’t know how else to deal with their unwillingness to follow.

Is it not possible to pierce the cell walls from the exterior?

I haven’t tried yet, I presume they are. The main problem there is that they’re on the third floor, and spending game hours finding materials for and building scaffolding is so far more inconvenient than what I’ve tried (although I’m this close to just debug-spawning a bunch of NPCs and pretending those are the prisoners).