So I was thinking there aren’t enough ranged enemies in the game, and that might be something we could use more of.

One of the more mysterious and dangerous enemies currently present in the game is the Mi-go. As I understand it, they are supposed to be intelligent/sapient creatures with their own society in another dimension, albeit one that is both extremely alien and (by human standards) cruel/evil. I was thinking some more varieties of Mi-go might be an interesting feature, besides the ones you can find in laboratories that were obviously abducted for experimentation, or the ones in fields that could have come from anywhere.

I was thinking of two new varieties in particular: Mi-go Raider, and Mi-go Slaver

Mi-go raider would be equipped with an alien rifle, and an alien dagger designed to inflict pain, hallucinations, etc, as well as a jump jet or something to let it hop around (leap attack).

Mi-go slaver would be equipped with a neural incapacitator pistol, very short ranged, used to immobilize and inflict massive pain, fatigue, etc, as well as an insta-kill special attack (only useable when you are unconscious), where they drag you back to their home dimension to some awful fate.

You would be able to loot their weapons if you managed to kill one, but since they would not be designed for humans usage, would probably require some adaptation/reverse engineering to make them effective for use by the player. You could alternatively turn them over to the Old Guard for a huge reward.

I’ve started some basic work on the mi-go raider, based off a standard mi-go and one of the wraitheon bots from the national guard base mod, but I’m not sure how to make it use a melee weapon.

Mi-go use entirely biological “technology”, they modify themselves and other creatures to meet their needs, so they’re not going to have an “alien rifle”, though they might have other ranged options like a close-range needle expulsion or whip like appendages.

No problem with there being other aliens that do use technology though, so doing what you propose but with some other alien faction would work. The problem with incorporating an alien faction that is hostile to humanity is how do you set things up such that they don’t just win every encounter? You need to limit their numbers, limit their access to firepower, and definitely remove their access to aircraft and spacecraft.

Crashed colonizers would fit the bill. Wouldn’t even need to be too far fetched technologically if they went the generation ship route with sublight drives. They’d have access to better weapons and power generation, probably armor too, but limited to what they can recover from the crash. Hell, it could even grow like the mycus. If you give them enought time to evolve, they ‘build’ fortified compounds with really really good loot inside as they repair their manufacturing technologies and start gathering resources from the surroundings. So, just like the mycus, if you leave them alone for too long nearby, you’ll probably not live to regret it. I like it. I like your ranged mi-go too, the blob needs more ranged stuff.

Mi-Go should leave NPC corpses with their heads cut open and their brains removed to be placed in metal canisters.

Mi-go use entirely biological “technology”, they modify themselves and other creatures to meet their needs, so they’re not going to have an “alien rifle”, though they might have other ranged options like a close-range needle expulsion or whip like appendages.

I can make the Mi-go weaponry organic and grown or bred, sort of like the Tyranids from 40k. They have a few that are separate entities from the host that are used as guns of a sort. Though I think this rules out them being useable by the player. However I’m sure the Old Guard would love to get their hands on some for experimentation. Also, keep in mind some of the stuff shown in the JSON text are just temporary placeholders. 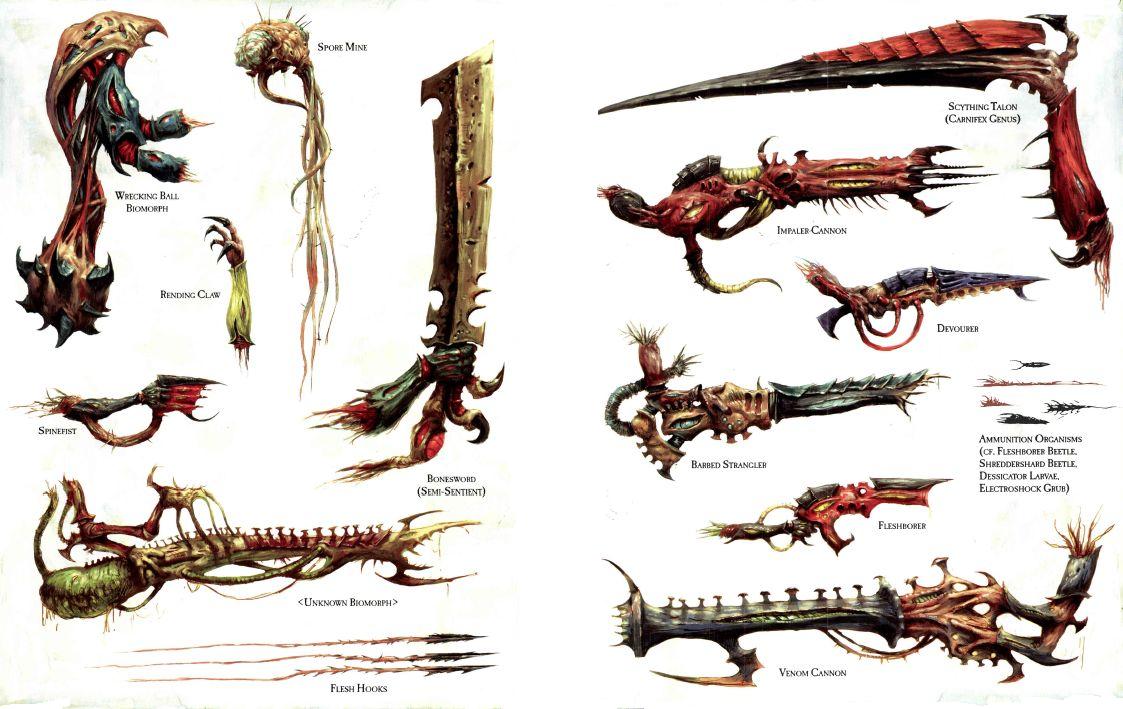 Tyranid Biomorphs are essentially biomechanical devices and artificially-induced genetic mutations of the Tyranid genome that provide another way to attack a foe beyond the Tyranid's natural weapons of teeth and claws or that alter an aspect of a...

Crashed colonizers would fit the bill.

I don’t know if I like the colony ship idea. It doesn’t really fit with the events of the cataclysm. Now, if they got pulled through the portals during the cataclysm, or came through as a group of scouts/colonizers before the random portal to their world closed. That would account for the lack of technology base, and they would have limited numbers/tech. They would likely have to scavenge and re-purpose our equipment and tech to help them get started and set up.

Like you say, we’ve got portals to other dimensions. There’s really no limit to what could come through them. Maybe this race makes a living raiding across dimensions, similar to the Goa’uld and the stargates. Ooo, better, the Kromaggs from Sliders. Maybe this cataclysm isn’t a localized thing and all their tech is disrupted somehow, dumping a lot of them here, where they’re stuck. With us(and the blob and the mycus and triffids). There’d be lots of room for expansion and they wouldn’t necessarily have to be more powerful technologically, they just got lucky in a couple branches of science.

I like all this. I’m not opposed to another alien faction (in fact I really like the idea), but I am pretty limited in what I can create. I can presently do a little bit in JSON, as seen above, but that is the limit of my abilities. I couldn’t code my way out of a wet paper bag, so any sophisticated implementation of the presence of an alien faction, beyond making the aliens themselves and their items/weapons is outside of my capability unfortunately.

Mi-Go should leave NPC corpses with their heads cut open and their brains removed to be placed in metal canisters.

That is totally going to be a random item they will drop on death.

What would they need coded? Seems like a lot of stuff could be handled with the custom monster attacks as far as tech goes. Since it’s organic, it wouldn’t drop a functioning weapon n anything the player could make out of it could be made to fit existing code. That would get the faction in the game as an expansion on Mi-Go’s. Anything more complicated could come later.

I was thinking of the alien bases and such you mentioned earlier. Or sophisticated behavior like picking up scrap, appliances, tools, etc in cities like they are scavenging. I can make creatures and items, based off of existing ones and whatever is available on github to mimic, but thats about it right now. I’m still very new to modding.

Also, I didn’t think we would want to add anything in piecemeal, but rather wait until the entire faction was planned and ready before adding them to the game.

If we’re talking about H.P.Lovecraft Mi-Go, then they had at least some sorts of non-biological technology, as they mined minerals on Earth for some purpose and had metal cylinders to place human brains into and preserve them alive, and advanced machinery so those brains can talk and see. Sure thing, Mi-Go in CDDA could be of another kind and use biotech only.

Yeah, eventually the mycus code would need to be made generic enough to have multiple factions using it(maybe it’s possible now?). But you could simulate the bases with worldgen and the picking up items could be covered by the blob’s item absorbing tag. Maybe they just digest stuff for raw materials and energy.
As far as adding things in piecemeal, I’ve seen a lot of good PR’s get bogged down bc they were too big to be easily reviewed. Splitting things up into sections seems to be the way to go, especially for an ambitious project like adding a new faction. Start with the basics, like your ranged Mi-Go and/or a ‘scout’ from the new faction. Mention your plans for the rest and ask for suggestions. Then you will be making new content with input from the gatekeepers guiding you, instead of revising what you’ve already made to fit their requirements, which will make it more likely that your next PR gets in, etc.

Mi-go are not Tyranids, and I am not interested in them moving in that direction, if you want a range-oriented alien faction you need to make one up.

I was trying to emulate something like this. But ok.

It would be cool if you could then dissect them to hopefully get their weapons, or at least some of the key components that aren’t completely merged with their bodies.

more varieties of Mi-go might be an interesting feature, besides the ones you can find in laboratories

Like the one in the overworld that killed my starting character within a few mins?