this frustrates me every time =( come on, is it really that dark in New England at 9:20 as to prevent reading and crafting, even in winter, even in storm? o_O 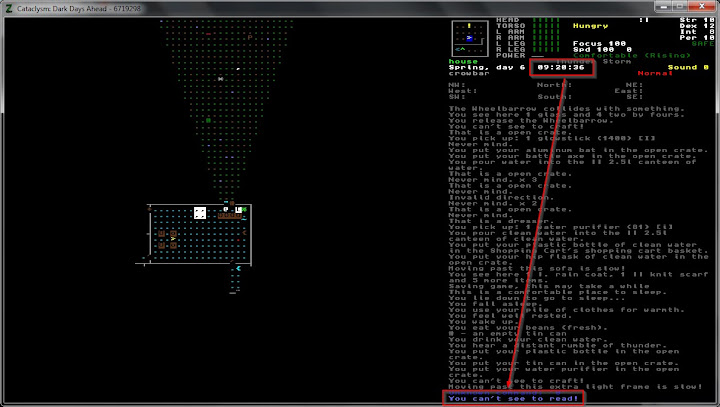 Looking at your interface, you seem to be running the stable version. This might be a bug that is fixed in the experimental versions. You could try loading the game up with that? The save should be mostly compatible, though new worldgen stuff won’t be there until you enter new places with your reality bubble.

The experimentals have reworked light code, which seems better in terms of what you can do inside buildings, at least in my experience.

It also has some hilarious downsides that hopefully get worked out at some point.

thank you for the updates! “It also has some hilarious downsides that hopefully get worked out at some point” — looking forward to discovering those =)

“Hilarious downsides”, other than night vision being negated by light, and night vision not allowing reading or other fine vision tasks, which are intended, what else is there?

Nah I was exaggerating. Most of the issues I know of have already been discussed in some form or other on github in some fashion. If I knew of a glaring bug in lighting I’d not sit on it like an angry troll or something.