I dunno if it’s something new, I don’t have a lot of experience with boats but a hand padded boat seems to just eat through stamina like no ones business, my character has 10 strength so it isn’t like he is weak or anything (8 is supposed to be average right?) and I’m not trying to go fast so I though I’d ask if this is intended?

Yeah, this is something that could be polished. No rush I imagine. But I’ve been in conoes and dingies enough to know that you can go across a lake you can barely see across and back with little effort.

This is likely a result of stamina changes. For bikes, at least, stamina is eaten up faster than it is regenerated – making them practically useless. I figure it’s the same way for boats.

There’s a PR to fix it, but it hasn’t been merged.

Currently I don’t strength is actually related to strength. Stamina is its own separate stat, unless you’re using mods.
http://cddawiki.chezzo.com/cdda_wiki/index.php?title=Stats
However boating can be quite taxing IRL especially depending on your experience with it and the weather/type of water. Arm and leg muscles do develop independently after all.
I would suggest adding a stat for “boating” experience similar to “driving” experience that would decrease stamina penalties

It currently takes 9 movements to use 1 and 1/2 bars of stamina at 4mph(slowest possible), if it isn’t strength related it should definitely not be dropping that fast regardless of hopw taxing it is IRL. The only reason I haven’t already ditched the boat as worthless is because it looks like it might get fixed, if it isn’t bugged they might as well remove hand paddles as an item.

Edit: I mentioned strength because IRC it affects stamina drain on vehicles that use foot pedals, it definitely does when it comes to power generating with foot pedals. Hand paddles would probably be the same since both are “muscle powered”.

Boats are still eating stamina like crazy as of build 9236, can I get an official answer on if this is intended or not? I just want to know if it’s worth continuing with this play style or not.

Edit: my character can row 74 tiles before getting winded. At 4mph.

The PR mentioned above appears to have been merged so muscle powered vehicles should be working as soon as you can get a new build.

EDIT: I just compiled a new build and a strength 10 character can paddle for several minutes at 6km/h in a kayak before running out of breath. I spawned the kayak from the debug menu, I do not know how it compares to your boat (or most boats for that matter). Seems like it’s better at least, and there is a clear intent to continue balancing the new stamina changes.

EDIT 2: Some more testing with various boats (canoe, kayak, racing kayak) and it definitely seems like I can row for around 5 minutes without resting, at 6km/h. I didn’t count the exact number of tiles but it was at least one tile per second so at least 300 tiles. 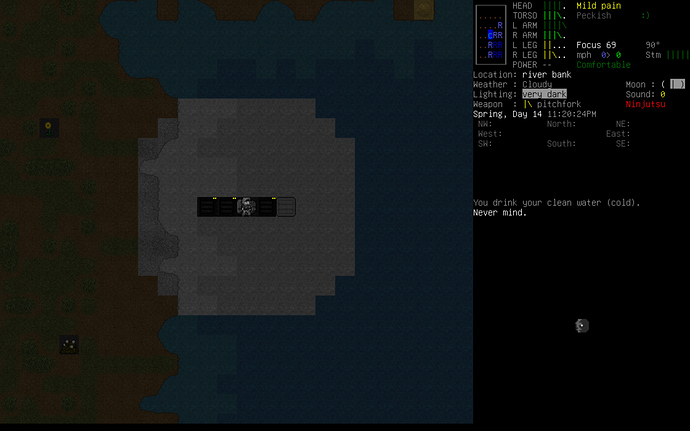 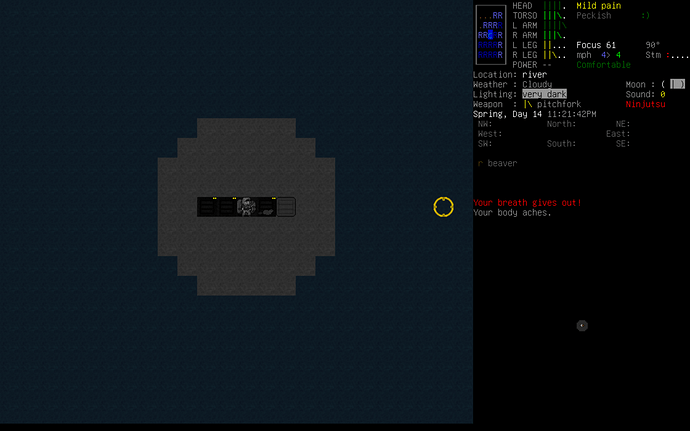 Edit: For comparison I seem to be able to ride a bike, off road, indefinitely.

Interesting. If that build is after the pull was merged earlier today, I don’t know what the difference could be. In any case, I’d say that merging that PR makes it clear this level of stamina drain is not intended. Hopefully they’ll have it sorted out soon.

Were you carrying anything in your examples? or was it just you and the boat?

Edit: I’m carrying cargo in the boat but for the bike I spawned in a storage battery as well to make the weight up, still infinite travel at 4mph though.

Just tried some more tests. With an unloaded canoe I made it just over 5 minutes before exhaustion. With 47kg of random stuff loaded into the canoe I went for just under 4 minutes. So that’s definitely a factor.

I just tried an unloaded raft, stamina dropped like a rock as well.

Hrm, I wish I had better info for you =/. I guess we’ll need to hear from someone who knows more about the stamina changes and vehicle physics.

Yeah, Im just going to revert back to before the changes for now until a fix comes in. I’m enjoying the run and don’t really want to spoil it with (what I hope is) a bug. The raft is an in game vehicle (unless it’s from a mod or something) so I’m assuming it’s a bug.

One thing I just noticed is that a bicycle has a rolling drag of 0.02, but a canoe has a water drag of 3.43 … I don’t know how the math works out but I’d imagine having about 171 times more drag could be a problem. (The two vehicles have the same numbers for air drag and static drag)

Seems a bit weird, water drag on boats compared to air drag don’t really work the same IRL from what I understand, I’m about as far from an expert as you can get though. I do know from experience that canoes are rather easy to use (once you get aboard) even for a complete novice and a pedalo even loaded with 6 people doesn’t wind you in under 2 minutes, that was on the sea fighting against waves/current too.

When driving a bike or rowing a boat if you turn the debug mode and bear with the spam of other debug messages, you will fish out three stamina relevant messages: Load: Mod: and Burn:

Load is how much the engine strains to keep current speed (0-1000) In muscle-powered boats YOU are the engine, so it will be significantly harder to keep the speed of larger and heavier boats. Whatever in the code affects load, will affect final consumption of stamina. A bike for example at 32 km/h has high load

Mod is the stamina modification that says how load was converted to stamina burn.

Burn is final stamina consumption including some base burn ratio etc. Normal max stamina is 10000.

You may use it in your tests. Good luck and report what you find.

I’ll give it a look later today, I’ve just reverted my game and want to actually do some stuff before messing about with it again.

I had some trouble when smashing corpses and my stamina started dropping and didn’t stop even after I had finished smashing. All my stats went to 0 and I couldn’t stop it. Was low on stamina and I had an arm splint on. Maybe there is something wrong with the arm encumbrance effect on stamina loss? Just a thought.

Is that with the most recent build?