Concerning the new power to wheel to weight ratio calculation

Okay, so the new update has made some changes to the way power, wheels, and weight affect vehicle speed. For the regular cars, it seems to be pretty reasonable, but for the heavier vehicles, it gets weird. Let me give some examples.

My angry hatchback from hell weighs 6 and a half tons. It has a gasoline V12 and a diesel V12, with six 32 inch wheels. It has a maximum safe speed of 113 mph. Cool. Makes much more sense than before.

I also have a decked-out fire truck that weighs about 17 tons. Same powertrain, and has 4 sets of 2 lengths of tank tracks. It has a safe speed of 66 mph. Little slow, but fair enough.

My 56 ton landship has the same powertrain and has 20 lengths of tank track. It has a safe speed of 30 mph. Not too bad.

-Here’s where it starts getting weird.-

Light Tanks and Self-Propelled Artillery come with 4 diesel V8s, with the Main Battle tank having 5.

The current maximum safe speed of a light tank is 7 mph.

The current maximum safe speed of an SPG is 4 mph.

Even the Maus could manage 8 mph, and it clocks in at 207 tons. Granted, the effective engine displacement is about half of the Maus, but the total weight is about 1/6, or less.

So it looks like something still needs some adjustment. Factors point to the diesel V8 being underpowered, but that could just be a symptom.

(I would also like to take this opportunity to compliment the devs on the new wind chill mechanics for driving without a windshield. That’s a really cool feature.)

Are you perhaps confusing the acceleration with the safe speed? I’m currently driving a mobile gun system at 61 mph, no problems, though it does take a while to get up to maximum speed because you lose acceleration as you speed up.

Cake-pie and I did a lot of math to get the new formulas right, and there’s an automatic test to make sure that the calculated numbers in the game match expectations, so I’d be surprised if there was that much of a discrepancy.

When did this change occur? I haven’t updated in a couple weeks. My tank still shows as having a top speed of 111 mph, 10 mph acceleration. Using 5 enhanced electric motors I think, have 7 total but 2 are inactive. Its based on a light tank chassis.

Is it safe to update yet? I was waiting for the fixes for ranged weapon targeting and hostile NPC targeting before I updated.

The vehicle speed rework got merged last night. You’ll see a significant drop in large vehicle performance but for most large vehicles, it shouldn’t matter - you’ll still be able to hit 50-80 mph, which is what most posters said they expected.

Yeah I only usually drive about 60-70 tops, way slower if there is anything nearby I might hit.

I started being more careful after crashing the game a few times when I hit things while going like 90 mph. Though that seems to have been fixed, because I accidentally drove through a forest the other day at 70 mph and it didn’t crash the game. My tank needed some repairs though.

Are you perhaps confusing the acceleration with the safe speed?

I don’t remember what the acceleration said, but I imagine it was something along the lines of “Hey, I don’t fuckin know, man.”

I went and checked with my other character who has an IFV for salvage nearby. It’s running on 4 armored wheels because the treads are all broken. 91/107.

The tracks on the LT and SPG were all broken as well. They couldn’t move, but they’d probably start.

I’ll take another look when I get out of the shower, if I can find them again. I’ll feel incredibly stupid if it’s different.

Yeah I only usually drive about 60-70 tops, way slower if there is anything nearby I might hit.

I’d clock 100 if I had a really long straight line. 26 driving skill makes avoiding things pretty easy. Perks of using a hatchback as a primary weapon.

I’m just glad I found those 3 additional enhanced electric motors on that atomic mini tank. I’m going to update this afternoon while I’m tinkering with some things, and I have a feeling I’m going to need that extra power.

I’ll take another look when I get out of the shower, if I can find them again. I’ll feel incredibly stupid if it’s different. 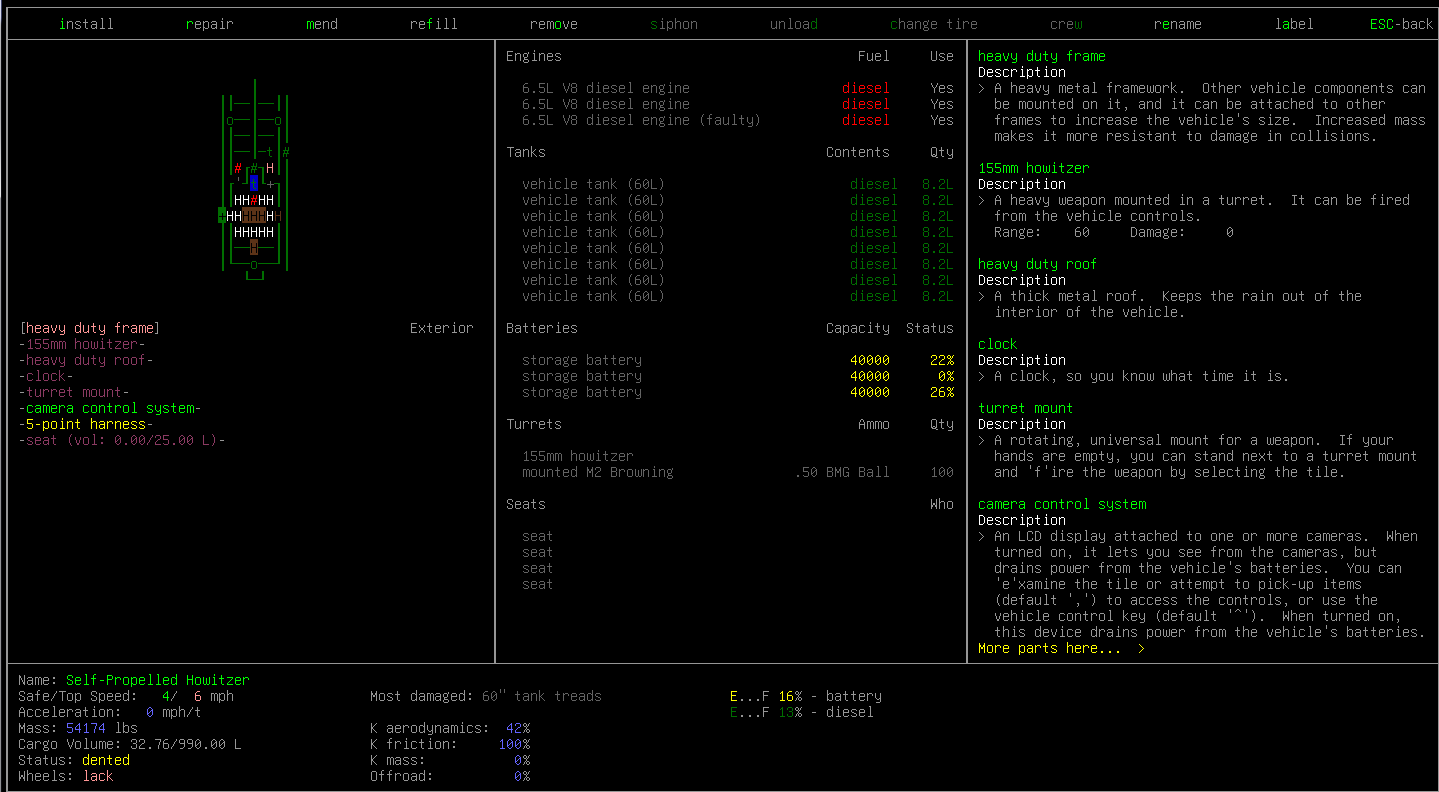 Your vehicle seems to have broken treads.

Ouch. That update hurt. Even with 7 enhanced electric motors, I don’t think I could run over a bush from a dead stop. I think that needs an acceleration of at least 10 mph. And fuel efficiency went straight into the toilet. Guess I’m gonna have to make some modifications. Also, for some reason even if I have an acceleration of 0 mph/t, I can still accelerate and have a safe speed of like 39 mph. 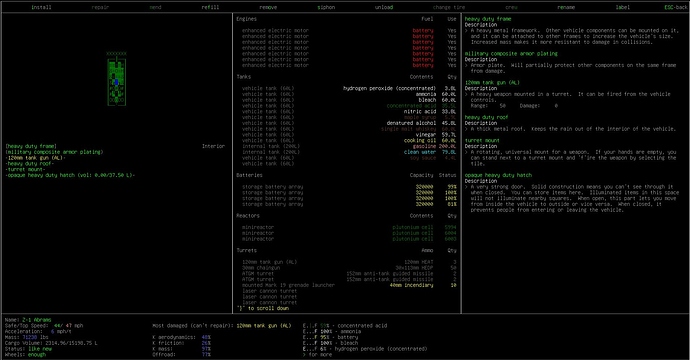 There may be another code change shortly that doubles vehicle speed per turn, which should resolve some of that.

And that monster weighs 35 tons, you should be happy you can hit 44 mph.

Oh I’m not worried about the speed. The acceleration just seemed weird. I can make design changes to account for a lot of this. Every tile is heavy frame, every frame composite armored. They don’t ALL need to be that way.

How many of those engines are at full strength? Any of them? Yes, the nearly broken wreckage that is missing its treads and has damaged engines is not going to move at full speed.

A full strength SPH has a design speed of 38 mph. The actual US Army M109 155mm self-propelled howitzer has a road speed of 35 mph, so I think things are where they should be.

So what could I do to optimize this monstrosity of a vehicle besides lightening it up? The battery consumption rate is ENORMOUS now. I chewed through the equivalent of an entire storage battery in something like 5 map tiles. I suspect I’d need all three minireactors going just to keep it running if the batteries ran down.

While my acceleration and max speed have been neutered my max safe speed increased? It went from like 4 accel 55 safe 157? top I’m not sure. I can’t say this change vexes me because I don’t mind them it makes a little more sense this way, 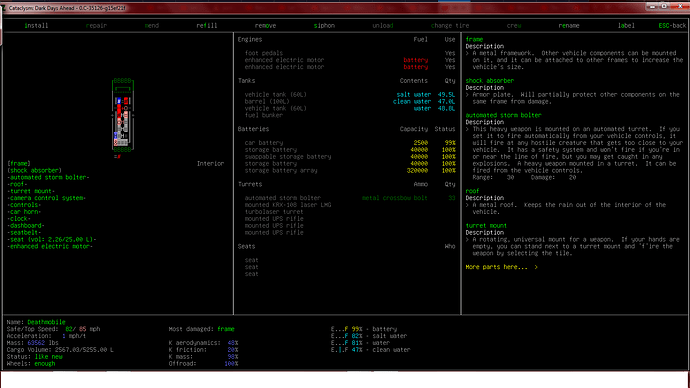 Hey what the hell, your vehicle is almost as massive as mine, but you can go like 80 mph with only two electric motors to my SEVEN.

Probably not as many heavy frames on mine like the outer edge is heavy frames. I have no wheels only roller drums. Not as many turrets Not as many platings though I don’t know what else though

But the plating and heavy frames should only affect weight. Maybe its the roller drums? I’m using tank treads. Maybe I need more/fewer treads? I’m going to have to do a complete tear down and experiment until I can get some reasonable battery mileage and acceleration.

Air drag is proportional to the square of velocity times effective CoD, which is one of the reasons a sports car can reach 175mph with a single V12 and 3 v8s get a light tank to 51 mph. The other reasons include the tank massing 20x as much as the sports car and having at least 20x the rolling resistance.

I believe this is the cause

Shit, so I’d have to make it more car like to make the game believe its aerodynamic. Damnit. I may just have to suck it up and deal with the battery efficiency issue by adding more batteries, making some tiles into frames instead of heavy frames, and stripping off the composite armor from most of the interior tiles.