Some CBM and item ideas

Yup just some ideas by a person with no programming ability.

CBMs:
Hydraulic Launch System: When activated, select a direction. You will jump in that direction with augmented legs, costing power. Could select a number of tiles to move, or just select a tile and hope you land there, potentially leaping over hazards like lava. If you have Hydraulic Muscles active, you can launch yourself further, bigger jumps take more power, maybe increments of 3-5? Being in pain makes it progressively harder to focus on jumping, having good dexterity and perception helps you land properly, and strength can give you that extra oomph to your leap, strong enough legs/hydraulic muscles and you can knock over/slam into similarly sized creatures. Jumping further then your current amount of power would normally allow should have hilarious consequences.

Mini Flamethrower MK II.: Two flexible, circular iris openings are installed into the recipient’s palms, connected to an internal fuel reservoir. When activated, a pilot light flick out from each wrist and activate as gasoline is shot from the palms, consumes a lot of power [20? Maybe 30] to throw a blast of flame out, much like a military flamethrower. Maybe it needs gasoline to function? Though that would be tricky without a new system.

Internal Megaphone: A speaker or something sciency is installed into your throat. Using a small amount of power, you can amplify your voice by throwing it through a speaker on your throat, great for shouting orders over gunfire and explosions in a battlefield! Or just being a jerk to nearby people. Potentially used to call sound-hearing things to your location, like zombies or allies when NPCs are at the point where that would be useful. Can also be amped up with extra power to deafen you and nearby creatures. Hope you brought earmuffs.

Internal Radio: A radio has been installed into one of your ears, you can scan for and receive signals, and transmit your own by talking and willing it to transmit by thought. Basically a CBM version of a radio.

!As an afterthought, rarer versions of bionics that aren’t obvious on the user? Like the internal megaphone not being a speaker, but something altered internally.

Items:
Repulsor Brace: Wielded (Assumed to be worn over the dominant hand) as a weapon, taking batteries as ammo. Unless a tool would be better, which works too. Holds 100 batteries, and uses 50 or 30 per use to launch a blast of force in the direction of your choice. Damages breakable things, creatures and throws them back several tiles ending with a stunned, probably hurt enemy. Using 100 charge in one go turns this into a powerful beam, throwing enemies back further and doing more damage. Also you damage your arm because you’re a mad scientist. Found in labs, or crafted.

Megaphone: Like the CBM, without the invasive surgery! Also it holds 30 batteries and uses 5? per use. Has adjustable settings, perhaps hackable to unlock higher settings. Not to the sonic-screeching voice of the prophet levels the CBM allows.
e: A loud horn already in-game, thanks Cherry! 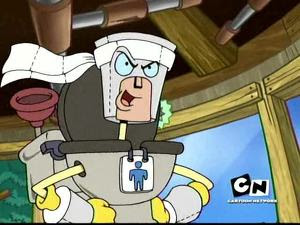 Probably adding more stuff as they come to mind!

As great as my experience in Patapon was as a Wondabarappa, I don’t think sound would be an effective weapon as of the current state of the game. They just gotta add in enemies that are specifically weak to louds sounds.

Also, sorry to burst your bubble

I vote yes for the military flamethrower CBM.
Also obviously yes for the spring boots CBM. This should have an analagous ability when they start making rabbit or werewolf mutations.

Repulsor brace reminds me of that one shockwave CBM that breaks walls, but I think it’d be much better if it had one easy setting, or worked like the nx17 charge rifle’s system. It could be powered by a ups too?

The internal megaphone and its physical counterpart should, basically, increase the distance you can talk with NPCs? Or rather, since they might not be able to talk back, just issue them commands. I’d rather just use a walkie-talkie / radio, but sure I guess if all you have is the megaphone CBM.

Why don’t we have cup phone yet? 2x plastic chunk + 1x 3 foot string

Ah, forgot about that horn. Thanks for pointing it out. ^^
The repulsor is a more focused version of the shockwave CBM, I do like it being acting similar to the charge rifle quite a bit. !!Science!!

Why not an LRAD bionic?
Allows for long range orders, sonic attacks, and luring enemies in a 30 degree cone, but with a disproportionately low noise level since it’s, ya know, not omni-directional.

It doesn’t have to be a bionic though.
Theory:

Find LRAD car part from an armored police vehicle (?), military bunker, police station locker room…
Attach to car with like say 4-6 mechanic skill (?)
Aim direction like a flashlight (if not omni-directional)
1hko BATS. And other creatures that will be added that happen to be weak to sound (lul).
AND do all that other stuff we you mentioned. But have it attached to a car like the picture.

OR OR just have it do everything you said + CBM version. w/e

When I saw “Hydraulic Launch System”, first thing that came in mind for me was rocket punching, not super jumping lol

Anyway, don’t want to hijack this thread, but I’d prefer having interactions with existing bionics before adding new ones, much like how the Hydraulic Launcher you proposed synergizes with Hydraulic Muscles. So, for instance, instead of having a standalone Flamethrower MK II CBM, installing the Fusion Arm Blaster while already having the Mini Flamethrower bionic (or vice-versa) will increase the power of your flamethrower power.

I’ll make a thread for CBM synergies when I get around to thinking some up, unless someone else wants to. I think some mutations synergize with each other already, sort of? Would be good additions.

I think CBMs are in need of usage menus in general, like how a knife can cauterize, carve etc. on that note.

Yeah I remember one update said they were going to make the CBM menu letters changeable, but they never did.
They should.