So what is a fungaloid?

Copied from the draw your cataclysm thread because it’s a frequently asked question - what does a fungaloid look like?

Pure Fungaloids (that I am not completely happy with, actually has someone here any idea of how a fungaloid should look like?)

Now, there is no hard set rule for how they appear in-game - in many ways, it’s up to your imagination. But I would make at least a few suggestions if you plan on coming up with a design for them and you want it to look right. Avoid the toadstools - the fungaloids move about and have multiple forms and sort of poof out their spores, and toadstools (agaric spore carriers) really don’t fit. There are plenty of non-toadstool designs to pick from, and most are more appropriate. (click to enlarge) But even more appropriate might be pulling from the fungal families the in-game fungus is based on. Think Asocarps more than Toadstools. Or even pull from some not quite fungal fruiting bodies 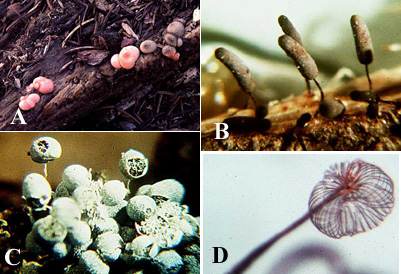 Also - Fungaloids have tentacles they use for moving around and slapping things! This is how I’ve always seen the fungal towers, with these tentacles ringing the top (but giant, obviously):

And remember that most fungaloids aren’t fruit, and so won’t even necessarily pull from any of the above. All of the above are simply the fruit of the fungus - most fungus (the non fruit bits) looks like this (you’ll notice this is mostly the undersides of things, because most fungus likes to stay below the surface where it’s a bit safer than getting eaten by everything wandering by on top - the fungaloids in game have no such concerns, though!): Ultimately, what they really look like is open to interpretation and is probably a good deal more alien than any of the individual organisms above, but hopefully this will give you some awesome ideas.

Now I’m creeped out. Perfect mentality to go into an english class with:)

So I came with a design I liked:
Some sort odd mix of the cordyceps fruiting body with an anemona

Also Is it just me or are fungaloids the only original monster of Cataclysm DDA? If so, they really need more love

That is utterly beautiful, and MUCH more similar to how I see them in my head. In fact, I think it might even replace them.

[quote=“John Candlebury, post:3, topic:3333”]…
Also Is it just me or are fungaloids the only original monster of Cataclysm DDA? If so, they really need more love[/quote]

I suppose that means The Last of Us is accidentally derivative

Canonically, I’ve been considering pushing the “fungaloids are actually renegade triffid allies who, under the control of triffids, actually form a symbiotic lichen that gives them large amounts of energy”.

So in some ways they’d be a type of triffid, and the triffids in general would have ways to suppress them, though other rogue triffids could be fungalized.

All this is probably a ways out from having any real meaningful impact on the game though.

I’ve been thinking about fungal growths being mostly underground, and wondering how hard it would be to have a fungal bed underground but popping up regularly, possibly in the default state there are only fruiting bodies poking out that do nothing unless disturbed, but if they are you have spores everywhere, and in short order fungaloids, etc. Kind of like the mobile fungaloids are a macroimmune response of the fungal colony.

Why does this sound like Sid Meier’s Alpha Centauri’s xenofungus to me?

this can only lead to one thing: