be spreading as fast/faster than fire? 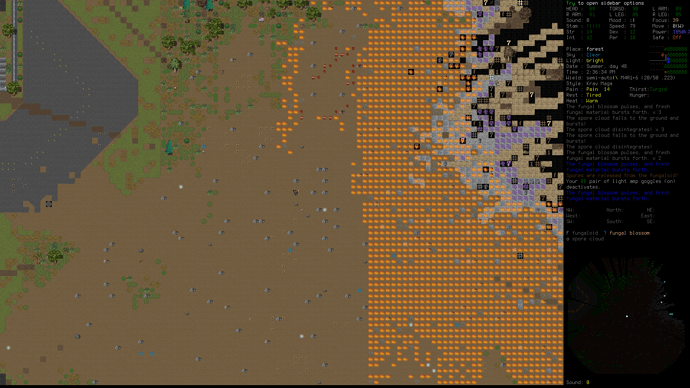 i’m basically following the blossom as it spreads to the right with the fire following it. i already blasted the spire apart.

Might have to set a fire in it’s path

unfortunately with how fast it spreads, thats kind of a fruitless effort… i’ve gotta basically bring it out of the sphere of influence, THEN either burn down the forest (its a big forest) or cut down the trees that it would spread to (which would take infinitely longer than the burning.)

i could also just follow the fire until it literally burns down the entirety of the forest that it could spread to, also killing any of the remaining fungaloids, the myloss berries, the sap from the spire… etc etc.

I can’t say for sure, but to me it seems like that’s intended behavior…

That is how fungaloids are supposed to work spread fast and quickly. I think that they also intend this type of stread for other fungal creatures.

Some other plans are to make every fungal structures guarded by fungal animals (fungal moose hulks beware) and give normal fungaloids the ability to turn into fungal towers and later fungal blossoms as well.

A more detailed break down of future plans are as follows:

… i mean, its not exactly something thats hard to deal with, it just seems that the fungal blossoms spread far faster than what anyone would consider ‘managable’ if they were trying to get rid of them… like, it’d be easier to get rid of them if the fungal blossoms only turned trees near them an hour after turning, but its -instant- as soon as a tree becomes a blossom it spreads more gas and turns more trees, making more blossom.

… like… if i hadn’t have set an entire forest on fire it’d take every bullet i have just to get rid of it (and i live in a military base with an armory full of bullets.)

to me that seems kinda silly… imagine settling down in a nice cabin in the woods, having a good time, and over the course of one nights sleep, suddenly you’re in the middle of fungal blossom central.

and thats -just- the blossom. the regular fungaloids and what not are still around as well… saw a fungal augmented abomination in the woods.

Whatever you do, DON’T Mininuke it. It will kill the blossom and such, but the blast area will spread the spores around the edges. This is super frustrating, because it’s about the ONLY good use of a nuke.

Well not the only use. Good for when you need to destroy an entire skyscraper. Ironically this was also to stop fungus.

Think you’ll have to take out the whole forest given what’s happening. If you have nukes available blasting the forest to clear area trees to prevent the fungal blossom engine from continuing could be a good call. Dunno how many you have but given the last time I found nukes there were 45 in one spot of you should hopefully have enough to blast quite the large line through. Not much more satisfying then settings off a dozen or more nukes nearly simultaneously to decimate multiple overmap tiles.

The fungus in this game is ridiculous and consumes everything unrealistically fast, I end up just avoiding that part of the map to prevent it from entering my reality bubble. Wouldn’t be so bad if the fungus spreads out by one tile every day or so, then I could work with it. Even better would be if the fungus behaved like fungus and branched out, spreading like roots in a single direction and then branching off and repeating the cycle, slowly consuming everything instead of each tile doubling every few turns. Something like the slime mold.

the way i -assumed- it worked was that the fungal area sent out fungaloids, and those fungaloids spew out fungus spores at regular intervals (which you can see them do.)

realistically, this’d mean you can halt the spread by simply killing the fungaloid then burning the affected ground.
… it seems like theres a very high spawn rate of fungaloids though, so when you find them, theres like 50 on a single space wandering around, so you have plenty of time to box them in with fire and burn them all to death

inversely, you have the fungal bloom which not only spreads quickly, but spreads spores that you -cannot- breath in without getting fungal parasites, meaning you cant get get close to it and often cant even see it to shoot/stop it.

Would a gas mask handle that? Honestly something that’s dangerous to breathe doesn’t sound too bad. Always have a heavy survivor mask on anyway because of all the toxic gas zombies.

a gas mask might help against getting the spores in your mouth, but they also attach to your body and eat at you that way too.

the only way to tell if you’ve been infected or not is with a blood analysis… i suppose you can get rid of it with the blood purifier CBM, assuming you have it, but still.

the farther you move INTO the bloom, the farther its spreading both in the way you came from and away from you, like… if you walk into it from the west, its still going west, and your bubble of influence lets it go further east

The behaviour of the fungus could change were only the main blossom can produce terrain altering spores, or coding wise a zone of influence that expands its reach periodically.

The sporeling creatures on the other hand may only replicate themselves and convert other creatures, but otherwise their spores have absolutely no terrain effect. Only replication and creature conversion.

Lore wise you could place it down to them being inferior specimens compared to the main blossom.

Which, honestly speaking mattered little in the base game, since the blossoms removal would have little to no effect on the spread. The sporelings would handle most of that themselves.

Through this change there be more importance and incentive built around the blossom, since they’d be the actual cause for the spread.

heres the thing though. you’re thinking ‘spire’, as its a main fungal building. i’m talking about ‘blossom’, as in, a tree converted to fungus. you can find blossoms anywhere, and in fact, the blossom had spread FAR more than the spire covered (the spire just being in the middle of some forest with the marloss berries and what have you.) the fungaloids i saw comparatively were spreading tiny chunks of land around as they moved… but not nearly as quickly and it was easy to burn it off.

Then could the same concept still apply to the towers/spires?

To summarise, more controlled terrain spread with same or higher density of enemies replicating and converting others.

Plus, with something of a zone of influance built around the spires , you’d have a more continuous and realistic means of it expanding. Instead of just cheesing it by moving the reality bubble away.

i mean… i’d love it if the fungal system was changed such that, if you find a fungal spire, regardless of your reality bubble, it began to spread outwards, and once you kill the spire it stops spreading (and it only spreads to a specific distance, then stops). but i have no idea how they’d do that.

The only way I imagine it being done is if it uses something similar to what is being made now to allow for buildings/towns to appear deteriorated and looted as the game advances in time.

With a similar mechanic set for the fungal terrain except this will be set to affect neighbouring terrain than its own.

Though as you say. How this will work, no idea.