I’m new to this forum and the game and I started the Jabberwock Quest given to me by some jerk named Mindi. The jabberwock came into sight and Mindi started shooting it. I only had a pocket knife so I tried to run for my life, and the jewelry store I spawned in was tiny, so I was stuck. Besides, the freaking thing was 2 tiles away from me (and hilariously spawned in a jewelry case). The jabberwock pounded me and Mindi kept on telling me to move out of the way instead of actually helping me (I guess that’s a friendly-fire fix). Traitor. Then I died.

Onto the actual bug:

After I died, I made a new character.
I spawned in the same jewelry store (probably because the game couldn’t find an evac center, I set the city size to 16 just because). I met up with that traitor again and I was able to complete the quest I started in a previous life! It also still considers Mindi part of my party. Is this intentional (since it would be annoying to recruit all of your old pals)?

Anyways, thanks for reading. I’m going to confront Mindi about letting past me die.

Edit: The jerk thinks I’m a major liability. Probably why she let past me get murdered.

Edit 2: There’s something wrong with the trading system. Mindy had around 1,600 bucks and I sold her some earrings worth 123.5. She ended up giving me all her cash instead. Hope you guys get around to fixing it, I’m kind of guilty about scamming Mindi despite her betrayal of past me.

Jabberwocks only spawn in forest tiles, if it spawned in a Jewelry Store it seems to be a bug?

As for the NPC, once you complete their quests they join your party ( though I only ever use “I need no payment” option ) so that’s why she was friendly to you despite another character.

Once an NPC joins your team, you can freely trade between you two, you can take all their stuff, though I never noticed them losing their cash, since usually I don’t bother.

I started the Evac scenario, but I set the city size to an insane amount (16), which probably generated over the evac centers.

NPCs have attitudes. One of those attitudes is NPC_ATT_FOLLOW, which makes them follow the player around and do his bidding. An NPC can only have one attitude at a time, so once an NPC becomes a follower by getting NPC_ATT_FOLLOW, they will follow any player that shows up.

Yes this is stupid and slightly buggy but it’s not worth fixing yet because hopefully the entire NPC AI system will get over overhauled Real Soon Now.

Hooray, overhauls!
If that overhaul comes around, please fix this: 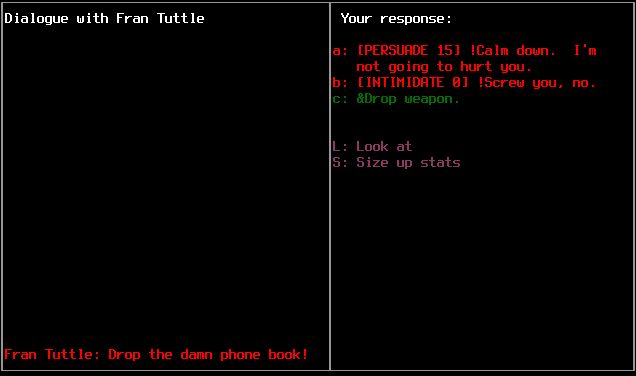 I’m laughing myself to tears because of phone book hater Fran.

There are dangerous people in the apocalypse, but there are none more dangerous than the Phone Book Bandits…

BTW, I’m fairly certain that this thread should go in ‘The Bunker’ category, since that one deals with bugs. The drawing board is for new ideas and the like to add to the game.
Please, correct me if I’m just being an idiot.