What monster has been the hardest to find for you? Of all the monsters I’ve killed, I’m surprised I’ve killed only 1 zombie wrestler lol

Hmm, never seen one of those. Wonder if they’re even in the build I have.

Blinkys are pretty rare to find and even rarer to get killed.

Haven’t seen a Blinky yet. There are still tons of things I haven’t seen I bet.

My rarest hunt was a Level 20 Plutonium Dragon. Had to use a nuke to kill it.
It’s so rare, it isn’t even in the base game AND you need to debug it in! (Cuz I dunno how to make it naturally spawn properly)
Practically nothing in my mod ROA is properly balanced. Partially cuz I’m a nub and don’t know how to balance it properly and partially because I’d need to add a lot more content for it to properly fit together.
But seriously, if you were to find that thing, you better scram before it one shot bites your head off, survivor helmet and all.

Well I killed this thing. 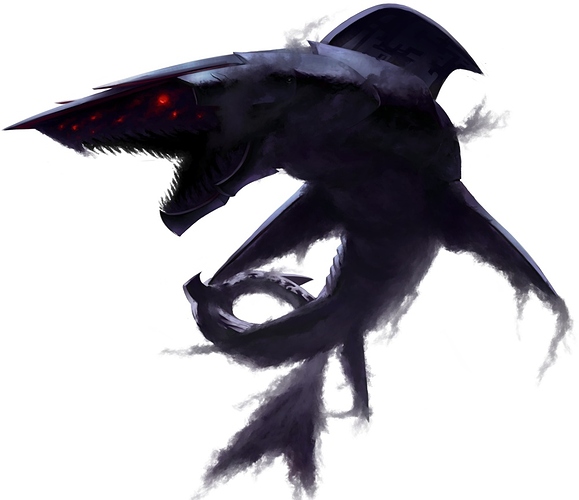 What is that? Some sort of Cyber-Shark or something? Or, if you’re me, cynershrek? I call all sharks shreks. Cuz reasons.

It’s a Nightwave, negative or (necrotic) shark from the pathfinder rpg. Thing’s a beast.

Good ol’ necrosis. When your skin literally starts rotting off your body from what I understand. Nasty stuff, that.
If you have necrosis, you are more or less a zombie.

EDIT: What does a vegetarian zombie say?

Well, it doesn’t have necrosis. It’s an undead type shark, but behaves like a specter…although it weighs about 100 tons.

I want to say it’s The Thriller and Shia Lebouf, from Crazy Cataclysm.

Smoky Bears are actually relatively common. I’ve seen a Thriller twice (the first time was in a new world, the second time I killed a zombie dancer just to prove I could, then killed the thriller and followed up by beating all the Hulks to death). I’ve seen Shia once. Shia’s rarity is especially odd, considering that it took 4chan less than two days to find him using a livestream of a flag…

Blinkys are a little common if you hang out by rivers. There’s especially easy to spot given that they glow brightly.

It was actually easier to kill the Shadow Snake than two of the three Shoggoths he killed. One got loose in a lab I was exploring, ate some stuff, and split into two. I didn’t want to run back up to the surface to get heavier firepower lest they get further out where there were piles of stuff to eat, so I decided I had to kill them here and now.
I managed to close a door on the second one, and then had a couple of false starts that ate a ton of ammo, because it would heal all the way up whenever I had to stop to reload. Luckily I had picked up a bunch from armories. I quickly figured out I had to get the bastard pinned into a corner with the help of my two NPC buddies (a mutant and a dude in plate armor), wail on it repeatedly in melee and wait for a moment when its HP went into the yellow, then unload my modded RM99 revolver’s six shots of 8x40mm HVP ammo into it, to finish it off.
Then I could stop to reload, and go into the other room and kill the other in the same laborious manner, which thankfully had stayed near the door (probably attracted by the sound?) rather than going to the other end of the room and getting out.