A tool to assist with creating new maps. 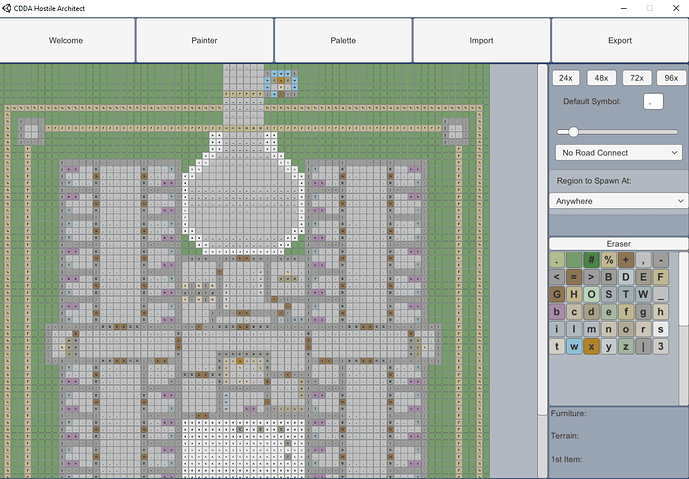 Hostile Architect helps you with painting your maps. But it doesn’t do it all. You’ll still need to manually add monster & vehicle placements through code outside of the app.

When I use it, I go half-and-half with coding, and using the app to speed things up.

And spread the word about this tool!!

Judging solely by video: in palette creation/selection sections, selected item should be highlighted in some way.

So far I’m working on getting all the terrains, furniture, and items in the dropdown lists.

I should also note that you can use custom itemgroups or terrains with this, just type their name in when you’re defining your palettes, rather than using the dropdown lists.

@Turn478 offered some advice on roofs, and so the next update will include the first foray into multi-tile buildings (floor + roof)! That will give users the infrastructure to make their own multi-tile buildings. That can be done via light JSON editing, rather than in the app, but I’ll record a tutorial on how to use the app to speed that along.

As well, will be adding in proper inner-city spawning (including regional_map_settings.json file), as I was informed that I hadn’t quite reached that as I had hoped through the other files.

Have been getting great encouragement from the Reddit post. Going to try and keep focusing on apprentice-level enhancements. There will be another updated walkthrough following the patch.

Wow! Great job on this. It looks like a lot of work went into it. As a non-programmer who essentially built a crude version of this in spreadsheets for my own modding purposes, I have to say I think this will make a huge difference to people who just want to start building stuff!

Something you may want to add to your vid/consider when testing to makes things easier on yourself:

Thanks! I was totally scratching my head on how to do it in Excel. I’d spent hundreds of hours in Unity on practice projects in the past, so I figured “Hey, why not do it in Unity!”

Appreciate the tips, the step-by-step instructions will be helpful for all creators who pass through here. I didn’t know about debug spawning overmaps, that’s going in my toolbox for sure!

Yeah, it took a loooot of combing through the jsons by hand and copying and pasting what might work in a given palette (ie - certain types of walls for use in residential houses) onto a spreadsheet. Once your palette is created, it’s mad copy and pasting the symbols onto the “canvas”. While it takes a long time to set it up, once you have it dialed you can use it to pump out variations of buildings really quickly. I made over 40+ houses this way.

If I had use of your tool to begin with, it probably would have saved me a lot of time making my own tools and really focused on creation. It looks like it could be really powerful and easy to use.

Did you program in terrain/furniture/item groups by hand, or do you have a way of “scraping” them from game files so that it’s easy to update between versions of the game?

The reason I ask is in the case of someone wanting to use custom item groups, or furniture from mods, for example

It’s currently possible in the app to set a palette to any modded item group, furniture, or terrain by just typing it in. The dropdowns are just a way to help folks fill in that text field faster.

So far I define all the lists by hand, while watching YouTube videos. There’s a certain level where I’m content to just vegg out and copy + paste. I’ve seen other attempts at these tools, and I honestly think they’ve gotten “lost in the weeds”. At a certain point less is more, and it’s better to keep thing simple than try and get the tool to do everything.

I can appreciate that. Ambition outpaces time/energy

As a non-coder myself, I have no idea if this is feasible, but would there be a way of importing existing palettes from a .json file? I think if you could do that, creating content and having it be ready for easy submission/integration into the base game would be extremely streamlined, and it might be an easy way of taking the load off you for adding certain features to the editor. Usually the devs seem to want standardized palettes for new additions (ex - all the houses in vanilla use the same standardized palette).

Anyway, thanks for your replies/time! I appreciate it

Yeah! I think importing palettes would be feasible. I’d just need to set up a place to paste the info in, and then code a JSON “parser” to digest the info. I’ll add that to my short-term “Goals” list, especially since that will help with generating locations that have a higher chance of being merged into vanilla.

I appreciate the feedback and ideas! It all helps orient me towards what makes the most sense. Talking it through like this helps with planning, thanks a bunch for your inputs!

Checked out your 2nd iteration. A few things came up:

I really appreciated the extra context about mapgen that you included in the 2nd video. It was all well explained.

Oh, and that roof addition is just fantastic. Thanks for doing that, it will give new users enough z level experience to get into mutli-tile buildings.

Plus a slew of other minor additions. It’s also downloadable now, which was a requirement for the JSON input parsing.

I had forgotten about starting this project, but some of the notes may be useful if you want to expand on your program. I made this for KorGenT and can expand it if it’s useful. It already has plenty of mapgen facets to think about.

Cataclysm - Dark Days Ahead. A turn-based survival game set in a post-apocalyptic world.

That’s really cool! Appreciate that you guys mapped it out like that. I’ll treat this like a dictionary of ideas that I could set up, if I ever want to build up the tool more.

Added ability to paint and export 48x (4 OMAPs) and 96x (16 OMAPs) sized maps! Be warned that 96x will cause a fair amount of CPU strain, as it does mean 9,216 tiles!! However it should be stable, just give it time to process when it hangs. I get no delay for 48x on my rig.

That amount of strain means I won’t get it making anything larger than 96x, so if you want to make things like a new Mall (which is 49 OMAP tiles), you’ll have to stitch together multiple 96x maps. I believe the mall itself was originally made in 24x chunks, so that should be no problem. You would need about 3 96x maps to match the size.

Added a ‘Map Import’ function now, so you don’t have to keep the tool open for days on end while making complex maps! You can export and then import your map from JSON to keep improving it!

There’s a fourth video walkthrough now as well, which shows how to import draft maps!

It’s really interesting watching this develop. Thanks for continuing to add to this!

I don’t have the tech know-how, but I’ve been thinking about a tool like this since I started making maps, so I have a couple suggestions. Of course you’ve mentioned you want to keep it simple and this is unsolicited, so feel free to disregard, but I think these would be real QoL improvements for users and also for yourself since you mention you’ve started making maps.

This might be tricky, however, since the x,y points might change depending on orientation of the canvas. This isn’t my area of expertise, but changing the road connection point to north, south, etc. might skew the x,y. I’ve always used my own standard orientation, so not sure how dynamically changing things would affect that.

Even if you called the tool done now this is a useful, feature-heavy tool that the community can use and you’ve obviously put in a lot of time and effort. Thanks again!

Thanks! I appreciate the feedback and input. Even if I don’t implement it it’s still useful to see ideas.

For your #2, I patched in a X Y coordinate viewer, which updates when you put your mouse over a tile. I was setting up Monster Spawns in a file, and this sped up the process and was way better than manually counting. I did notice the X Y coordinate calculation seemed off, and your info on that is useful. Currently my X Y counter works just for south-facing locations, which is what I’m building right now, but once I run into another location I’ll set the other directions up too.

A lot of the development on this extends from what’s available technically in Unity. It may be interesting to know that I did almost zero pre-planning, it was almost entirely a technical development. From previous projects I’ve found that pre-planning can actually hurt, because a lot of times what one imagines can be very different from what is available. Part of how the project was deployed so fast was that it just extended from “Ok, now I just need one more feature!” and adding the bare minimum to get that done.

For #3, it is possible, although currently the app doesn’t read from any files on your computer. I’m being selfish on this project, so I’m focusing on the features I need rather than expanding customizability.

I am finding myself continuing to patch, even though I’m trying to minimize any further time spent. I’ll likely build the tool out more whenever I run into a roadblock preventing my own map-making, and I like to keep the public version as up-to-date as possible.

BTW: Here’s a preview of a map I’ve been working on the last 2 days! It’s a medium-security prison. 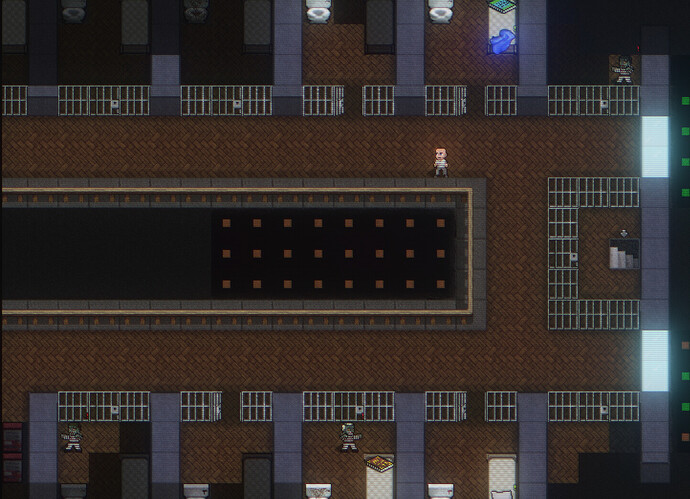