Thanks for fixing my dumb mistake on the mod!

Oh hey. I was just getting back into CDDA and was in the process of fixing up The Vermilion Mod for myself, but I guess you beat me to it lmao. Thanks.

Not sure when I’ll have the motivation to add onto it more, but at least what exists works thanks to you.

hey, vermilion that’s fine lol you can update it on your page if you like or let people get it from here if you want to leave it here and add more content you could pr I want to get more people updating the mods either there own or others, thank you for the comment

Hey Goat, not sure if you’ve seen this:

Some user updated the Artyom Emporium mod in January and it def should be included in the batch.

Also I noticed the Modern Weapons Expanded mod and Artyom Emporium mod have a lot of crossover and each have unique weapons so it could/maybe should be combined into one mod. How well coded/balanced the weapons are though they probably need some work.

hi mewb, ill look into it im doing an update somepoint to do and ill add the changelog, i want to merge some minor mods as well, if gun values arent the same ill see what ill do then leme have a look

edit: i fixed the color issue but didnt know how to do the 40mm one this is great ill add it in

Hey Goatgod didnt know if you knew or fixed it but bioco was murdering people with autodoc but this person fixed it. Sorry if you already fixed it or already knew

Stupid question re mods: which one is killing me? The Lab

Indeed. I first thought it might be the Convenient Constructions mod causing this, since it allows to move auto docs (and maybe messes up something behind the scenes), but no, it was my second guess; BioCo. I’ll take a look to see if I’m able to fix that. PS: I need sleep. Past me is stupid.

thank you for the reply, i have found all the japenes mods that i will be translating and adding into my mod pack, removing all mods that through up any kind of error for next update (doesnt mean the mod doesnt work at all) i actually found a bunch of mods that will need updating that ill add in later.

thank you for informing me of this mr clambell

you are very welcome, I love the mod pack by the way

thank you, the 0.1 official should be here by end of next week (want mods fixed and back into the pack)

I am using the Rivtech Beam Sword mod in the pack. One of the beam sword components requires ‘plutonium slurry’ to craft.
The recipe for plutonium slurry has been obsoleted. It is found in puddles on the ground under damaged reactors, but being a liquid it cannot be picked up. This leaves no way to craft the component.

I suggest you either re-implement the plutonium slurry recipe as a recipe in the mod, or change the ‘beam sword emitter matrix’ recipe to use an intact plutonium cell instead.

Wow, nice work! You are going to be busy for at least a few months fixing so many errors

Unless something has changed fairly recently you can get drums of plutonium slurry from toxic waste dumps. 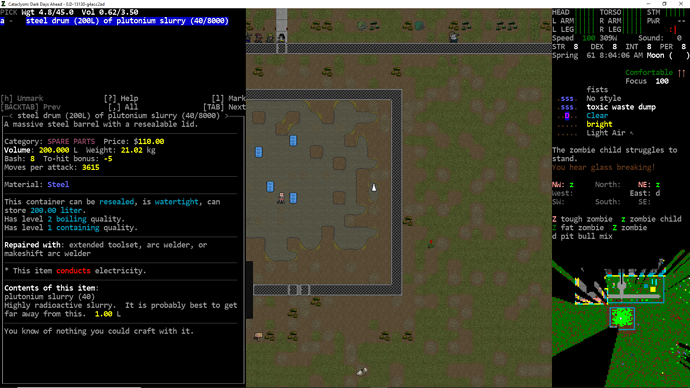 There is another place it spawns, I think it might be the power station but I might be misremembering.

@crazykiddeath ill look into that just now couldnt find a power station anywhere, i looked at the json files but cant find the paticular json for this it is a think though for sure

thanks for this its awesome mate :).

I am seeing these errors

there is a load more errors not just these but they seem repeated a few times 223,223c, ETC ETC

Thanks in advance (if ya need mod list let me know)

I added my modlist

thanks, I’m aware of theses I’m going to look into it soon, try to keep on top of them if you could post them on https://github.com/TheGoatGod/Goats-Mod-Compilation/issues will be easier for me when I get round to it. I have time later but whether I spend time on this or not is another question but this will get done and I want every mod working for E, I also use a tone of mods like 40 plus lol most of the mods that add items tbh

they look the same errors although one will prob fix the other, the spider one I’m not sure if ill look into it though, I’m slow on coding as I’m pretty new to it and only really started a few weeks ago lol

Awesome thank you for doing this.

I’ve fixed the Psychiclysm mod, here is the link to it https://mega.nz/#!HV0hzAQa!1CRMC5MeWuTOZQzSioOv0wOyzRyTp7hj9yKVHBxE3tQ , the spells should work properly now, would be nice if you uploaded this to your GitHub repository

one less things to fix now