Details in the linked issue, but the tl;dr is we’re REAL close to having all the blockers sorted out, so I’ve created an official release branch that will only get bugfixes from now on, and the release should happen in the next two weeks.
If you know of any outstanding bugs that are not listed in the release project reply here or in the above issue and link the issue describing it.

Update: We are in content and string freeze, tentatively the release will occur March 2-3 to give translators time to complete translations, and give people time to find release candidate issues.

Ok…seriously though. What is the difference between this and the experimental versions people get every day? Seems like pointing new people at something to go fishing with on the end of a lure…oh…I answered my own question didn’t I?

I thought we name those releases after people.

Maybe “Dirac” or “Doppler” something.

What is the difference between this and the experimental versions

A release branch gets only bug fixes, so if somebody has a cool new feature they want to add it (and then debug for the next few months) it goes into the experimental branch, not the release branch.
Basically it’s a branch that will get increasingly stable as bugs are fixed, while experimental goes on being, well, experimental.

Last I heard, freezing is still wonky. Like wearing stuff and stuff still freezes etc… So I ponder why this would go into a non-experimental? 0_o

As far as I know, issue #27405 where Electroreceptors, Freshwater Osmosis, and Aqueous Repose are all largely nonfunctional is still at large, isn’t it? Sorry if that sort of thing isn’t important enough for this release, or already resolved.

I’m going to assume the thermal energy stuff will make it into 0.D, otherwise freezing still feels semi-broken and I’d consider it a fancier form bugfix. 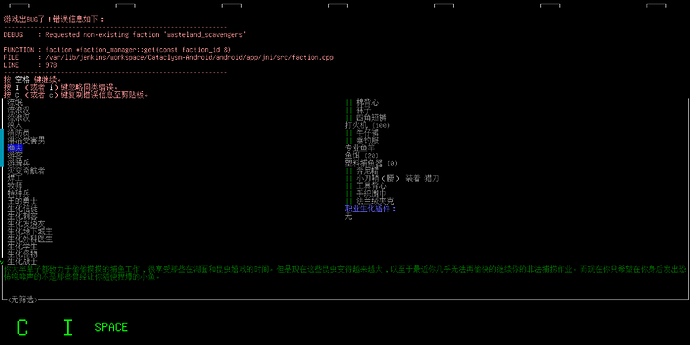 Its been so long but soon the wait will be over.

I have a save from more than a half year ago. Is it gonna be compatible when D comes out?

I suppose it’s compatible with the latest experimental after all? Do I need to open and save it in the newest exp before D?

Holy hell! Does this means that the old Playstore version will finally get it’s update!?

My longest running game dates back like three years or so. I had to delete a couple of missing items from my car like radio dynamite (and I imagine if I drive back west I’ll have some more errors when it reloads those old map blocks) but overall it works fine in the latest.
I’d say back up your save and try it out in a recent experimental, if your particular combination of mods and such cause it to go all pear-shaped, just keep an old copy of the game around to play that save with.

Thanks! The save is actually almost a year old. It went through a move-survivor-to-a-new-world action a half year ago and I played for weeks after that with some manageable glitches. And I stopped playing for month.

I will update probably in the weekend. Hopefully it will survive.

i wonder… is it already implemented into the game, a feature that when you use melee weapon with material like wood, it will break after being used for some time?

Yeah all items will break over time if you use them for combat/bashing. I think it is based on the material with extra modifiers from flags on the item (for example swords and such say they can take beating while knife spear is fragile).

We are proceeding to string and content freeze, there are two release blocker issues remaining, and both have candidate fixes.

From the issue linked in OP

A few more bugs have surfaced (and have fixes), but the long and short of it is expect the release some time in the first week of March.