Compiling with Visual Studio and MSYS2 both lead to a problem with tile-sets being visually off despite having the same graphical settings as the experimentals. Game otherwise runs fine as far as I can tell.

I’d screen shot it, but Cata does not work with printscreen.

Anyone know what I’m talking about? I have no clue how I would resolve this.

Cata does works with printscreen.
Press printscreen on cata, go to paint or other program, create empty pic and press ctr+v.

I use PrtScr and Paint.net for all of my screenshots. Don’t know what problem you’re having.

Just gets my desktop and any windows I have open under it. I tried sharex as well but no dice, I’ll see if I cant get a video of it tomorrow because I don’t think I’ve explained my problem well enough.

EDIT: I’m a dummy, it works fine as long as its not fullscreened
so for example - experimental looks like this

Yep windowed did it.
Only one picture a post for new users so sadly I have to spam this thread with my poor quality grabs
compiled looks like this 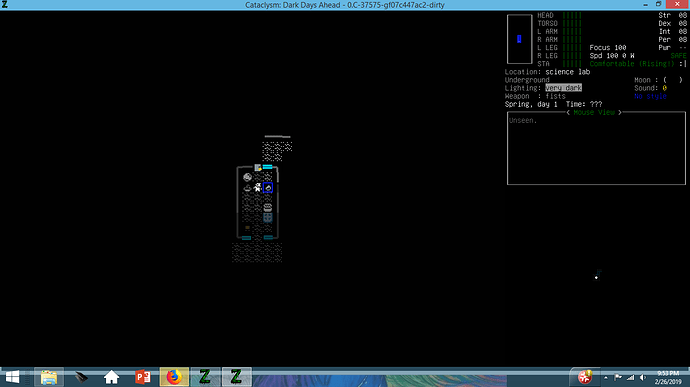 Yep.
Looks like same problem with my tileset (and any tileset, really).
Try switching to direct3d rendering!

Direct3d is the default but for good measure I just went through them all, no dice.

Yep, guess you one of “lucky ones”. Number of users cant get rid of misallined tiles even with direct3d rendering.
This problem existed for a long time now, but i guess nobody know what to do about it.

Weird thing for me is that it looks fine on the experimental but gets garbled when compiled myself.
Even compiled on another computer with win7 instead of 8.1 and got the same problem.

I was assuming it was me being dumb.

Yeah, i tried Hybrid Inventory [2019-2-8] (guy also compiled his own version of cataclysm) and it is also was misallined even with direct3d.

Womp womp, well thank you for letting me know I’m not at fault.