I don’t think this is a bug with the game, but it bugs me.

I have an effective dodge rating of 21. I already have enough trouble with them because of how bad of an idea it is to punch them, and how much HP they have. They actually become LESS of a threat when they turn into spitters. Gimme a break here.

Try using uncanny dodge cbm, their ranged attack is probably being treated like a bullet by the game, requiring super human reflexes to dodge it. Shooting them before they get into range works well too. Here is my preferred methodology: 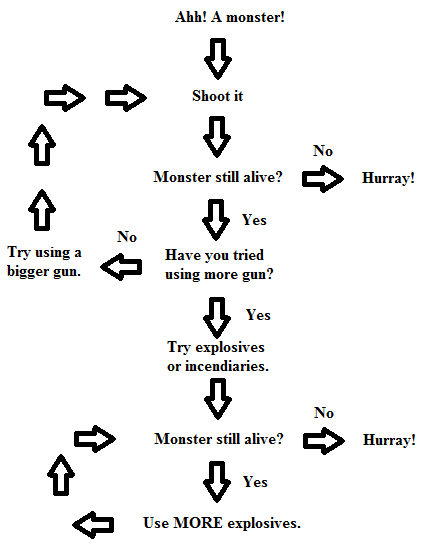 I guess they never miss, huh?

Try using uncanny dodge cbm, their ranged attack is probably being treated like a bullet by the game, requiring super human reflexes to dodge it. Shooting them before they get into range works well too.

I don’t have that CBM and can’t find it. I’m not sure I’d want to use CBMs on this character though. That one would certainly be useful.

I don’t have the second option. If they’re in range, I’m in range. She really ought to carry a magnum, but I haven’t found anything with the ammo or magazines required. I’d also prefer it to fit in an ankle holster, but the best thing I know of that will fit in that is a USP45, and I still need a couple more magazines for that.

This character can clear out an entire shopping mall unscathed literally by going awoo and holding down the Tab key. Hulks and Juggernauts are not even a threat to her. She does more damage with her claws than with her gun, which is a Sig Pro. She is a whirling canine death machine of teeth and claws until one of these bastards shows up.

The Sig Pro takes 4 or 5 shots to kill one, with solid hits or even headshots. So if I want to take them out before they become a pain in the ass, she will need a handcannon of biblical proportions. I might have to go that route, but I don’t have any .454 speedloaders (no way am I packing a .500), and I’d be giving up 0.1 dodge for it.

…Or she could carry grenades, like you suggest. I’m not sure how that would work out. I think grenade pouches are on the torso, which is a no-go.

They uh…also seem to be able to see me through walls. Um.

Just keep grenades in your backpack. The large grenade pouch for hand grenades goes on the legs iirc. If you want to go light, I’d recommend the rivtech automagnum, ruger redhawk, or a sawed off shotgun. If you tailor the leg holster or back holster I think it drops the encumberment to zero or 1.

Personally, I’m primarily a ranged character, Barrett .50 rifle kills everything the laser rifle doesn’t, and I use my tank for fire support. I usually don’t give a single shit about anything other than hand, arm, or mouth encumberment. If I really needed speed, I’d just use a bunch of stimulants and combat drugs.

She, uh…doesn’t have a backpack. She doesn’t have any storage space at all. She has a sheath with a hunting knife (for butchering, because Carnivore and Junkfood Intolerance), an ankle holster with a USP .45, and an ankle pouch with a spare mag for it. Because screw it, I’ll just keep the truck closer and reload more often. Along with a hairpin for locks and a hip flask. That is literally all she wears.

…And a dog collar. But…ya know.

When she needs to carry stuff, she carries a duffel bag and drops it when something needs to die. Volume drops to zero, everything else drops with it, makes it easy to pick back up and resume.

Now that I have higher Tailoring: Leg holsters have 5 encumbrance and cannot be fitted. Leg pouches have 0 until they’re filled, then they have 2. Both not ideal, but doable. Large grenade pouch is torso and has 12 when full. Definitely unacceptable.

The conundrum I face with magnums is ammo. The automag has decent capacity, but ammo is hard to find. .44 Magnum ammo is even harder to find, needs speedloaders, and has low capacity. I have about 500 rounds of .45 ACP. I have 60 rounds of 8x40 Caseless. I have 20 rounds of .44 Magnum. You can probably see what I mean. They are craftable, but that brings up other factors, like supplies, recipes, and accuracy.

In either case, I also need to kill boomers and bloated zombies before they reach her, because being poisoned or nauseous gives a significant hit to dodge and melee. So that’s even more ammo used. I can improvise, but it’s generally not a good idea. Not much I can do about the smokers, but the smoke debuff goes away fairly quickly.

I tried using a rifle with a shoulder strap yesterday (HK416), and replacing the hunting knife with a bayonet, but it takes way too long to wield. Like, in real life terms, it would probably take less time to assemble the thing out of loose components. So that didn’t work.

I have considered carrying around a javelin for the exploding enemies and just using her speed to pick it back up, but I don’t think that would work consistently.

For reference, to benchmark her speed: She can outrun an angry moose. With a 15% speed penalty. (Then turn around and kill it with a single roundhouse kick)

I do use the machine guns mounted on her truck when an opportunity presents itself. It blows out her poor doggo eardrums every time I do it, but it does the job. The truck doesn’t fit in cities very well, though, and moving it around makes it harder to keep track of what I’ve looted.

My first character is similar to what you describe. I made Local Wolf Girl to try something different. Very different, apparently.