The gun, ammo and magazine names should be adjusted to be more clear.

There are so many different kind of guns and magazines that it is hard to manage them. Often you find gun without ammo and store it somewhere. Or you find ammo without gun and store that too. Then you look at your storage to see what ammo fits to what gun and it is horrible mess. You can’t use the advanced inventory at all and instead need to use the normal inventory to look at each gun one by one to see if you have ammo for that or even magazines.

Simply having the caliber in the name would make it much easier to find and manage guns. You could even use the search then!

So for example "Glock 22" would be renamed to "Glock 22 (.40)" and the "Glock magazine" would be named "Glock magazine (.40)". Weapons and magazines that already have the caliber in their name probably don’t need it added second time.

Some names are also confusing. For example "Glock magazine" doesn’t go into Glock 22 but into Glock 19/17. So lets also speciy which glock the magazine is for and rename it to "Glock 22 magazine (.40)". After a quick look I didn’t notice other magazines with this kind of unclear names.

The .223/5.56 NATO is a mess. The game handles them as being exactly the same thing but the naming and weapon descriptions separate them. You look at weapons the description says it uses “.223” ammo. But when alll you find is ammo called “5.56 NATO” you will think you can’t use it. Then eventually you happen to look at the 5.56 NATO description and see that it is called .223 ammo there.

I like the caliber size on weapon names.
For bullets, it would be interesting if we had the bullet diameter on parenthesis instead, so it would be .223 (5.7mm) and 5.56 NATO (5.7mm) that way they also help you figure out which bullet types fit on small/large handguns or rifles, how much damage they’ll cause and all that.

Guns have barrel diameter and either fire rimmed or un-rimmed ammo.
Guns that fire rimmed ammo can be revolvers or something break action - these can fire bullets that are the same diameter but could be different lengths.
Guns are fire un-rimmed would be more picky with diameter and length.

And then rifle ammo is normally tapered which lets it act like rimmed ammo or unrimmed (break action or in a magazine).

Bullets can also vary by how much gunpowder which means guns with thicker barrels can fire the lighter version of the ammo but thinner barrels can have trouble with the more powerful version. 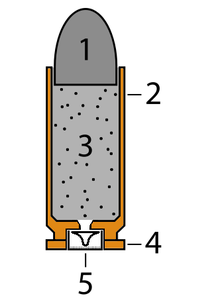 A cartridge is a type of pre-assembled firearm ammunition packaging a projectile (bullet, shots or slug), a propellant substance (usually either smokeless powder or black powder) and an ignition device (primer) within a metallic, paper or plastic case that is precisely made to fit within the barrel chamber of a breechloading gun, for the practical purpose of convenient transportation and handling during shooting. Although in popular usage the term "bullet" is often used to refer to a complete Ca...

Ssssoo? It is probably well known that the caliber does not mean ‘bullet diameter’. Other things are not necessary to be displayed ingame. All you want to know is the caliber of the round, what kind of effect it produces (like birdshot vs dragon’s breath) and the approximate amount of damage.
What’s with AK ammo? AFAIR, there’s only 2 types of them in the game: standart FMJ and an AP round with a sabot. What’s the deal?

I usually just pick up the guns I’m interested in and bring 'em with me into a gun store when I’m raiding, and then all the ammo that fits gets highlighted when I hit “V” or whatever.
It does the reverse, too, which can be nice.

I certainly wouldn’t complain if the ammo was standardized and de-complexified a bit - but the reality is fairly messy, so I assume that the design will keep going in that direction.

Mostly I use bows because they are simply superior in 80% of situations, esp once you have any kind of real low light vision, so all the additional complexity of firearms just make them a somewhat awkward curiosity from my viewpoint in terms of gameplay.

The generic weapon mod does solve this issue as long as you don’t care about having the real world names. Just saying.