I lifted this off the reddit from somewhere, I don’t have the source so I’m sorry I can’t credit the creator properly. 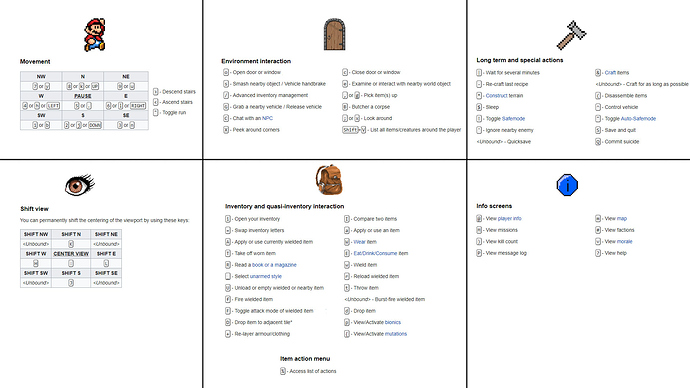 That is a great cheat sheet, and good visual comparison

There are different entertainments. CDDA is the one that is not about graphics or story.

Games, like anything else, have varied levels of specialisation. The majority of AAA games have a fairly low level of specialisation, they’re designed to be appealing to the largest possible audience, so they tend to focus on things that everyone likes (story and graphics) without getting too deep into mechanics. Some people like some mechanics, and dislike others. For any given mechanic, you’ll have a portion of gamers who like it, and a portion who don’t.

Currently, making a AAA quality game takes A LOT of money and resources, so companies need to get their money back (they can’t run at a loss, no matter how much love of gaming they have), which means applying a lot of shallow, but commonly liked mechanics. Things like combat, hit points, upgrades, progression, etc. The more they apply, the more gamers are going to like the game, and the more gamers will buy their game, and the more money they make. This generally comes at the expense of depth of mechanics, and therefore gameplay. What you usually end up with is something with “stunning visuals” and an “intriguing story” that lasts 6-15 hours, then it ends and you feel rather hollow.

In my opinion, community is the best part of Cataclysm and that is why Cataclysm is so unique. Relationship between developers and players is the key to a perfect game. Moreover, Cataclysm is more like an ‘engine’ which we can use in order to create a ‘game’ that fits our needs. Of course, it is not possible to change Cataclysm into The Elder Scrolls: Morrowind but one can still change it into The Last of Us, Call of Duty, Far Cry or Mad Max. Moreover, the use of ASCII / various tiles provides depth that is beyond the reach of 3D games
On the other hand Cataclysm has a very serious disadvantage - each game that I play during ‘post-Cataclysm’ era feels so shallow, empty, artificial or just stupid

An ordinary AAA game: OH I am sooooo excited that I will play this game!
One our later: It is soooo boring…

Cataclysm DDA: No… I am never going to play this game again
After a long time of convincing myself that I am ready to play it again: YEAH! I love it! Two weeks of Cata!

There are good games besides CDDA - to name a few: Subnautica, Bastion, Terraria.

Though the open engine allows for the creation of story driven stories right? Those can be made in/for CDDA right? As mods or whatnot

So so true, games are a creative endeavor combining many skills, departments, and funding sources.And this is what gets me, it would seem most of this money and time is going either to advertising, paying the overtime for day one patches,graphics and niche techs that arn’t yet fully viable. These companies are all about money and timed releases but seem to have lost the capacity to efficiently use the money and time they have at disposal while basing their future projects and investor’s confidence on projected profits and promised gains instead of managing a budget and fallback funds which can lead to a timecrunch panic focusing on making the money promised instead of looking to long term plans that include customer retention, financial stability, quality control. and funding for proper play testing. The climate that gamers and journalists culture does nothing to help matters until the gamers get angry. I think the companies(within the last two years for sure) are actually banking games not on large target audiences but on the ones most likely to pay for in game purchases, I could almost say this is the slow transition in cultivating a new consumer base and profit model.

Rouge likes are brutal, I can’t deny I make semi-regular backups in case something screwy happens or I don’t feel like letting fate steal 20+ hours from me. But I kinda like the punishment too, lol

Apple has shown for the last decade or so that you can continuously pump out trash products and useless, flashy gadgets based on decade-old technology and your idiot fanbase will keep buying it and giving you record profits. It might take a few years, but I suspect a few of the current megacorporations are going to fail hilariously when people stop buying their every worthless product without reason. Until they do, or something else changes, companies are going to keep treating consumers like dirt.

The strange thing of this present day is that, in a way, those people are in separate world from others. Following personalities and impersonating videos of an ideal life we may have never heard of or seen. A role for each individual in Mr. and Mrs.(Ms.) Everyone, carefully crafted to engage and interact in every right way corporate thinks. This is no puppetry or true mass delusion. It could be seen as worse, a subversion of rational thought through hype and encouraged drift from responsibility.
To create what has been made requires a redesign of business. One that is designed to nurture a reliance and dedication that fosters emotional attachment not just to the brand name but the faces of that brand. It’s a decision to read an economic’s tetxbook from right to left instead of left to right and finding the recipe to the philosopher’s stone hidden within.

They’ll just move to fully software based entertainment, cloud storage/database/computing, and adverting. Catching those SOBs is like holding onto a greased catfish, even with a hook in it, and they know it. Why else the 15 mil sign on to that new CFO? Smoke em while you got em

I just…I’m sorry. I watch this and just know in my soul it needs to be shared. Blame those damn Commies. Narkotik kal comrades…Narkotik kal

I think there are enough buisnesses in existance that don’t follow that model, plus the usual drop in buisness when a company goes that direction means that ‘companies that care’ will always be around, and may even ‘win out’( perhaps not fully but enough that they fall to lesser levels) especially if schools ever do anything that teaches kids how to be a smart consumer from a young age.

At the beginning gave validation to buying that expensive new machine.

Neat. I don’t have the game. But I will check a “let’s play”. I helped mod a bunch of crap back for Morrowind and FO3 years ago. Good times. Was funny that I have (offline and not on this machine) a few unique variants of both games. Pretty sure besides about 6 key modders anyway.

What Morrowind mods? II still play that and have around 80 mods working in semi-harmony. lol

To many to remember and a lot of custom stuff that would bridge most of the big mods together. I tend to mod a game and set and forget. The only mod I remember adding was the last one that would extend visual range and add all depth and shadows and pretty much allowed(weather pending) the full view of the island to the mainland(which was also added).

Although I don’t have anything to currently do with this project. Check this out for future game play that may be of interest to the fans.

also check out Tamriel Rebuilt with Morrowind Graphics Extender or whatever it’s called these days.

Want to compare mod lists in pm? lol
Actually been thinking of volunteering for that, have about a half dozen dungeons/houses/etc I’ve made over the years