Not exactly a bug report per se, but it seems there may be some confusion about the nomenclature of various parts of modern cameras. Cameras do not have iron sights. Point-and-shoot cameras as well as SLRs both have viewfinders - the difference being that the SLR contains a prism which allows the viewfinder to peer through the lens directly. The steel bracket on the top of the camera is called a hot shoe, and it is used to mount an external flash unit. It is not useful for sighting or composing images. Some older cameras do have iron sights. I have one. It’s a 4x5 Speed Graphic press camera, commonly used as a professional camera in the 40s and the 50s. 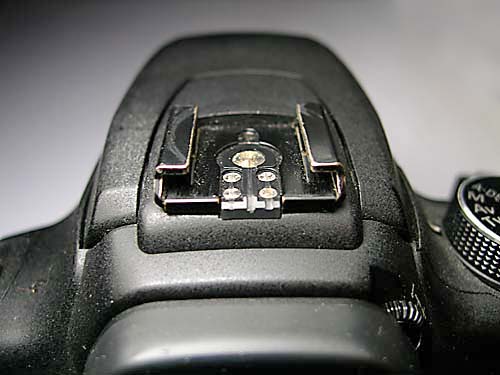 this is a hot shoe. There are a few contacts which send a signal charge to an external device when the shutter is fired - usually to trigger a flash.

speed-graphic4x5.jpg800×600
this is a Speed Graphic. There is a rectangular frame near the front of the camera which extends to line up with a smaller frame near the back. I am not sure as to the actual terminology of this part, (probably viewfinder, still) but iron sights would, in this case, be an accurate descriptor.
Random_dragon January 31, 2016, 10:44pm #2

So even in the grim dark future of Cataclysm, old-school press cameras will never die. o3o

To be fair, the larger film size and integrated bellows does allow the press camera to create superior images. The physical bulk and slow workflow are what drove it from the market. Think VHS vs Betamax.

Come to think of it, if someone were to preserve the art of photography post-apocalypse, it would probably be through the use of such devices. You can make a pinhole “lens” with an aluminum can and a sewing needle. The camera body can be made with a tin can and a drill. It’s really only one step further to add a bellows. Someone with a certain degree of mechanical proficiency could add a timed shutter to the mix. If your favourite apocalypse scenario disrupts the production and distribution of silver halide compounds (which, incidentally, can be suspended in egg whites to make an emulsion), then you can substitute in tea or coffee, since caffeine also possesses light-sensitive properties.

Hmm, that would be interesting. Or for more chemistry Fun, I wonder whether it would be feasible to make small amounts of silver halides for more film. I suspect it wouldn’t be practical, but when has practicality ever stopped survivors? o3o

We’ve already got raw silver, so I guess that it’s possible, but I don’t have any personal knowledge of that process.

Hmm. Though producing it is one thing, making film out of it is another. :V

Paper negatives are especially straightforward, but reversal (duplicating the negative to make a positive) will introduce some muddiness to the resulting image as the light shines through the paper fibers. Like a photocopy, the image will degrade after recopying it a couple times… but why bother, when you have the original? Film is pretty much the same thing, except that it’s some kind of plastic-type transparency smeared with emulsion, instead of paper. And then there’s glass, which in terms of image quality still exceeds all subsequent technologies. Prior to the invention of the Kodak Prior to the invention of the Kodak camera (and amateur photography), the industry standard was wet collodion process - glass plates coated with emulsion. It fell out of use due to the difficulty involved in transportation - weight and fragility. These are especially easy to use in a large format camera such as the press camera, or in a makeshift pinhole camera.

Hmm. And I would assume that making the emulsion would be easier than producing the silver halide itself? o.o

Again, I don’t know how silver halides are made. But yeah, emulsion is basically “take this sticky stuff and mix it with this chemical”. It would be interesting to have crafting recipes which can only be performed in the dark!

A quick little google search provides clues: silver halides are formed when silver nitrate (literally silver dissolved in nitric acid) is mixed with bromides or iodides - potassium is typical, but sodium is sometimes used. The resulting silver-salt is the light-sensitive stuff. It probably needs to dry before becoming especially light sensitive, as in the case of bichromate process. (chrome being an alternative to silver - gold or platinum can also be used) … Oh, and then the “sticky stuff” can really be any number of things: gelatin, egg whites, sap…