It’d probably also help streamline the lumberjack function for the AI companions as well when you consider it.

It would be lovely if we could get a [b]atch hotkey in this window: 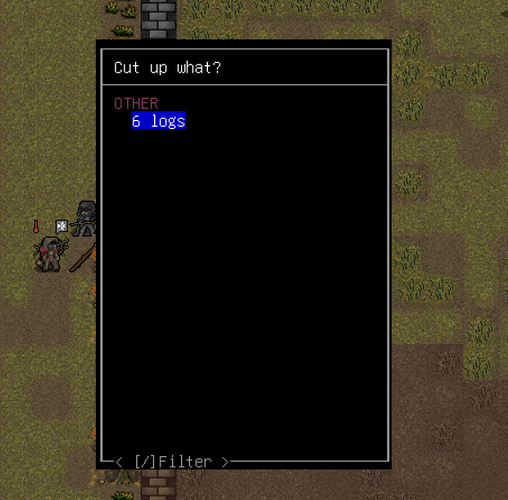 As-is, I’ve only found the ability to turn logs into planks individually.

An alternative proposal would be to add a crafting menu option to turn logs into planks and co-opt the already [b]atch function there.

It would help us base-builders immensely if we don’t have to micro-manage our key inputs to turn a dozen trees into planks to build a few wall tiles!

The fact that exists is, good… I suppose…

Though making that more readily available to the normal player would certainly be appreciated. Since I can’t pause that GIF and you’re going at lightspeed, it’s tricky to catch the specifics of the action. Regardless, it looks like you have to set zones and use the basecamp mechanics.

All about that intuitive accessibility and ease of use in my murder-fest world-ending Cataclysm. If the world is going to eat your face off at every. single. turn, at the very least it will let us [b]atch craft our planks to build flimsy fortifications darnit! How else am I going to feed the flame boomer zombies!?

Crafting doesn’t offer the same chance that we can get with actions, like this.
Sorry for the speed - basically, the system is:

All of that is far less intuitive than preferred.

Yes, definitely. There’s a lot of mechanics that are really handy and aren’t told to the players that should be.
For example, did you know that you can wield very heavy things within the radius of a crane for no penalty?

We would really like a better way to tell players about this, but there just isn’t really one yet.

In the meantime, having something like a recipe and or a hotkey or function in the tool’s menu for multicraft would be beneficial.

A much, much broader count of users are going to be more familiar with crafting recipes than establishing crafting zones. It makes sense to at least provide another function within the game’s system to cover more players to improve their game experience.

Zones are an elite-tier tool to play with that I expect a significant number of players either won’t ever know exist or simply will be put off from learning due to self-perceived learning curves.

Since this change proposal would be geared towards assisting the more casual audience with less insight into the deep mechanics of the system, I would be quite pleased to see something additionally added to assist players.

Besides, if you have the beneficial crafting method in one location, why make the other methods harder~

It’s just another item for the cue, I’m aware there are bigger priorities out there than adding a batch hotkey to wood chopping~~~