I was killing an ant nest that intersected a lab, and killed most of it without issue. however when I got close to what I alter found out was the queen chamber there was a seemingly endless stream of soldier ants. killed about 400 in 2 corridors over 1.5 in-game days before getting fed up and using the debug menu to kill them all.

While an infinite stream would make sense if spread out over a longer amount of time, having hundreds of ants spawn in a day seems ridiculous. Especially when I browse other threads and find that people were talking about 6-12 soldier ants guarding the queen. for comparison here was my queen chamber after debug-killing everything. 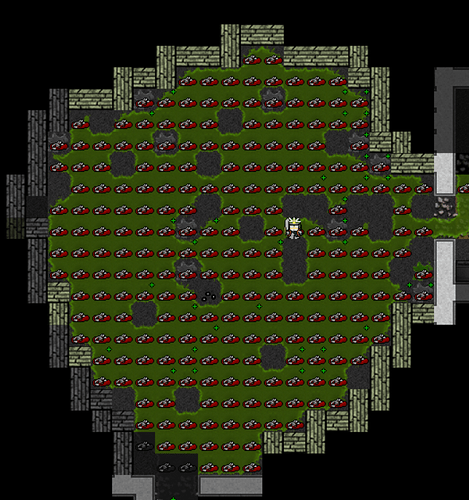 and nearly all of those are soldier ants (224 soldiers in fact, compared to 14 other corpses).

Given the above, I suspect something about the spawning was broken. Maybe something about having a lab there caused it. Does the spawn rate increase if the queen-area is under attack? because there was an armoured zombie whacking at soldiers for that entire time in a different corridor. Alternativly, I wiped out the rest of the nest first, with the queen’s nest being the last room I found. Would that concentrate all spawns into that room or something? Regardless of the reason, it seems to have been somehow broken.

I mean it is closer to realism given the fact that larger ant colonies can range into the millions very easily but even then the ratio should have the workers at a much much higher number than soldiers. I don’t really tend to mess with anthills in my runs though so I wouldn’t know the proper behavior though.

Right, but to be clear, they are GIANT ants. All that energy has to come from somewhere. In an actual anthill you can churn out babies all day long, being force fed food that is plentiful because of your small size. Food’s not that plentiful when you’re huge.

And larger creatures tend to not produce massive amounts of offspring for a host of good reasons. I don’t know how much caloric value goes into creating a giant egg/larva/whatever-the-hell-you-wanna-call-it from scratch, but I bet it translates to a lot of food.

Anyway, many a Cataclysm player has waged a seemingly endless war with the ant population. Honestly, if you’re having problems with them I’d suggest just moving. And yes, I think that ants could take a nerf to spawns. That’s just my opinion, though, and I’m sure there are people who like it the way it is.

I mean it is closer to realism

The ants I killed probably had a biomass equal to a small forest, had no external food supply - as the two corridors out of the queen chamber were both battle sites with nothing getting past. Realism has already long departed this situation.

It would make sense to wage an endless war with the ants if you tried to stay away from the nest, as you would be allowing the a fairly large amount of time to grow. Same total population, but slower numbers regeneration. But if you manage to make it inside, it really shouldn’t be quite this ridiculous to clear the final room. Difficult sure, but not like this.

And if you really want there to be more ants, make the nest bigger, with a higher ant/room count, but don’t cause them to spawn at a rate that defies all logic. There are plenty of ways to handle this without making an unbeatable room at the end.

I mean, it’s not even the numbers that bother me; not really. If there were a couple hundred guarding the queen chamber, but those numbers were static - or regrew at a more reasonable rate, like a couple dozen a day - then it would be fine, and feel like a worthwhile challenge. Like after wading through the ant hordes you have finally reached the end, and kill the queen. Instead it was a pointless grind where progress was impossible, absent console commands, or a LOT of explosives.

Actually I’ve had something similar happen with pk rebalanacing’s hives which adds wasp hives and bee queens. And what I observed from that with Max spawn rate is that the game just poofs new mobs in groups as the spawn count increases more often than not that happens either right in front of you or it happens near by due to reality bubble being the only mobs active which is why you get the insane spawn rate as the entire spawn pool is trying to spawn on top of you. So really you are seeing possibly days if not months of growth pressing you as from my tests it is a linear growth as with triffids and all other kinds of enemies of their caliber(mycus are a beast unto themselves(came from pk teaching me infestations can happen anywhere cause OK decides they need to spawn near you)). So really if you kill the queens(because from my recent tests with them there is more than one queen) and just keep killing them they will eventually run out plus if they don’t have any thing adding population to their spawn pool they will slowly lose that pool even without you being there.

Oh. Reminds me of my own old thread.

So, ants. What’s the point in all those ant hills? I’ve killed hundreds of those pests around the hill and hundreds more inside, and all I’ve got as a reward is a single Ant Egg, aside from meat and stuff. Though I’m not even sure where that Egg came from. Nothing is inside an ant hill, no larva/food/queen chambers, contrary to what’s written on the wiki. The same to be said about slime pits and bee hives, though the hives have some honey lying around, at least. Moreover, the map down there be…

Good to know the chamber connections have been fixed, at least.
But I guess that’s exactly the reason why I have been able to clear the whole ant nest clean. No connections = nowhere to go from the queen chamber.

Actually you still sometimes get disconnected rooms I found this out during my tests with them(spawned a clairvoyance artifact) and some rooms spawned with items in them and ants but no why to get in. Also found out in that test that certain enemies can spawn more enemies(might be pk or arcana doing that probs pk though). More over queens pk’s hive overhauling don’t behave like the rest(triffids heart and ant queen produce new units as do fungal spires and their walls).

I’ve only messed with anthills a little bit, but I have messed with grenades, and If you’re careful, they could be an excellent solution for stuff like that. You may even want to consider using a launcher.

While it IS a lot of fun to play Starship Troopers, walking through twisting corridors in power armor and massacring thousands of ants, it definitely gets old, and you will eventually run out of explosives or incendiaries after a while. I purged an ant nest like this once, though it was only about half as bad as OP’s situation, and it took every bit of explosives, napalm, gasoline, 5.56, 9mm, and buckshot I had hoarded to do it. Can you use mininukes or a nuclear silo to collapse their tunnels? Or maybe just some C-4 at the entrance to the nest to trap the bastards inside? Or do the ants just appear from thin air on the surface as long as the queen is alive, regardless if there is an actual entrance?

I’m not sure if they appear on the surface, but if the queen chamber gets too clogged they will definitely appear out of thin air in the tunnels. The game at least makes sure they don’t spawn in LOS of the player, but I’ve seen them come from dark corners that I’ve previously cleared, with no exits or entrances. Made it even more difficult to make progress, as I couldn’t actually move forwards without ants spawning behind me. Best guess is that it tries to spawn them from the egg, realizes that the space is filled, and then places it in the nearest free space… which might be rather far away.

I tried collapsing the entrance to a caustic anthill earlier, bombarded it with turbolaser and hypervelocity driver rounds, to no effect. Idk if the entrance just CAN’T collapse, or if I just need to use more gun. I have some high explosive 120mm tank shells lying around I could try, but I’m loathe to waste them since they are so rare.

I did notice something odd however: Ants seem to be distracted by loud noises. They ignored me and my tank completely in favor of congregating around the impact zone of my bombardment. It might be worth packing flashbangs while clearing a nest, use them to cluster the ants together for incendiary or frag grenades.

I don’t believe ants have good sight if they can see at all in game. Because if you have the debug silent walk on you can get within a few tiles before they aggro on me. So I don’t think they can actually really see. But ants don’t actually spawn in the nest they actually spawn any where they please within I believe 4 map tiles (might be wrong on the exact number) if you kill the queens however sealing the hive will trap what remains. But that is unnecessary as they will die out eventually due to a lack of respawning ability as the queen feeds their spawn pool. In short just rush the queens and give them some buckshot as they will fireball you if you get too close or they see you.

There definitely needs to be an alternative to dealing with anthills than purging them manually. Like flooding them with nerve gas (or insecticide), or something like this: [https://www.youtube.com/watch?v=2ibnHGWR9pU]
I mean, if better loot spawns are implemented in the future, they might be worth exterminating tunnel by tunnel, but there will always be times when its either impractical to do so, or you want the damn things dead more than you want the loot.

If you dig a pit adjacent to a magma rift, will the magma flow into it? Will it flow down Z-levels? If so, it might be a potential extermination method if you are lucky enough to have a rift near an ant hill, have good heat protection gear, and are willing to take the time to dig a big ass canal to the rift.

As a long time dwarf fortress player, I find this method very appealing.

That won’t work because Lava is merely treated as a regular tile and doesn’t flow anywhere.

it is great for quick disposal of unwanted though