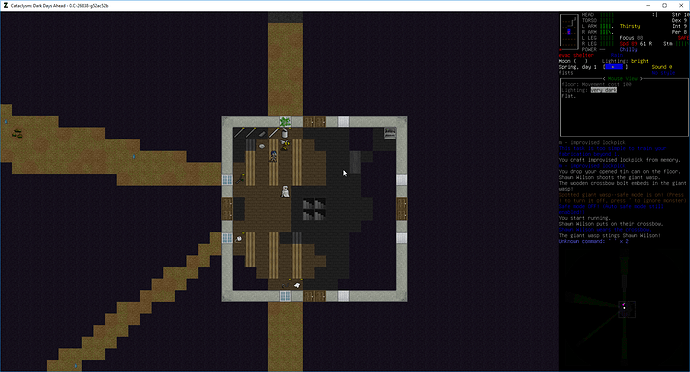 I see this happen with a turkey that was stuck in a garage I was chasing it and it disapeared I thought ok well nothing I can do now so left the garage that was joined to a house and opened the door I closed to stop the turkey from escaping and bam it was on the otherside of the door.

I have seen this as well, though I have not updated recently. I’ve never seen a zombie disappear in this way, it has always been a giant fly (or something that looks like a giant fly). When I approach or attack, they frequently disappear before I can kill them.

Yes it does seem to be flying creatures.

They disapear and warp on the other side of say a door or window.

Are you playing with “Experimental Z-Levels” enabled by any chance?

Encountered this bug once with a static NPC, was teleporting in and outside building, got eaten by zombies. No Z-Levels enabled.

I was playing with z-levels enabled. I suppose that might be the cause for me. Maybe they just flew up. Didn’t even consider that.

I was to yes but if they flew up how did they still get inside does not make sense all windows where shut and unless the building had no roof I cant figure it out.

This was an issue a while ago but maybe its come back again?.

Well Z-levels are experimental. I was thinking about this earlier, so what I have to say is just my thought, not based on hard evidence.

My guess would be that there is no roof. Right? If I was coding this project, and it was taking place strictly on one ground-level plane, I wouldn’t bother setting up any kind of roofs.

Then, if someone worked on Z-levels later, they’d probably focus on the logistics of the system, not on putting roofs on old buildings.

My guess, and again, this is all just my non-evidence based thought, is that there simply isn’t anything to keep a mob from traveling ‘through’ where the roof would be.

The fact you don’t get rained on while inside suggests there are rooves for at least some purposes, but it could be something was changed accidentally so those rooves don’t block birdies anymore. Or something along those lines.

Just saw a giant mosquito teleported through wall. Experimental Z-levels enabled.
Maybe there isn’t any floor at upper z-level and it just flied over? Cause i already noticed that ‘roof’ tiles on one level actually not counts as floor on the upper level.
I’ll check it out this evening.

You don’t get rained because tile on current z-level has ‘roof’, but this roof isn’t a floor on upper level. But this is only my guess.

PS: Sorry for necroposting, i was not paying attention to dates.