Recently, I discovered that many suits of armor like the Leather Body Armor, Chitin Armors, and Metal Armor categories don’t have an XL armor category for them which uses up more ingredients.

Since I discovered there is a “Huge” mutation that burst me out of my precious Bio-Chitin full body suit with all my accessories, I went to go and craft the big-boy versions, to which there weren’t any.

I’m curious if it wouldn’t be possible to create such options for us abnormally large brutes that want nothing more than to go murder acid ants, take their skins, and wear them as we wrestle Zombie hulks with our bare hands!!!

Also, if I want to dress up as the Armored Hulk in knightly attire and Roleplay as a 9ft tall Sir. Hugalot, could that not be so?

After all, leather can be crafted to fit you as needed, metal can be forged, and whatever we do to make insect shells work for armor can certainly be done for the mutated human form that struggles through door frames!

All things considered, this isn’t a very high priority issue, but I do believe it would be a matter copying the previous armor categories, adding a certain amount of additional resources, expanding the crafting time, and expanding encumbrance/weight respectively.

Having some love given to us abnormally Mutagen addicted abominations would be much appreciated.

But, for the time being, I’ll just be taking myself with basic clothen wear and punching these Skeletal Hulks in the face with my skivvies until I can put together some Survivalwear.

Since I’ve heard rumor of .E being around the corner, I think we abnormal late-game monsters can survive another season before we figure out how to use these overly sized fingers we now find ourselves having… where’s my food tongs when I need them…

There is a bit of a problem called the square-cube law.

Simply existing as such a large creature already gives issues regarding weight, overheating, nutrition, etc. Not to mention you are probably humanoid, which presents problems of its own as you go over a certain size limit. To armor such a thing up further compounds all problems into an unmanageable mess. Leather armor and other fabrics like kevlar, ok, it’s doable and still somewhat realistic to armor up a big thing with. But a good set of armor out of something like steel? Pure fantasy and your guy will not be able to move in it if it doesn’t make his skeleton collapse under the weight, even if a little bit of it can be handwaved due to blob influence.

You wouldn’t want to lessen the armor’s protection value, so you’ll want to keep it the same thickness-wise at least. Problem is that those plates are just going to get exponentially heavier the bigger you go. You would NEED the big armor to be powered, at least a little bit to hold itself up if you wanted to use it. I don’t know if it’s a happy coincidence or not, but even in fantasy there’s a reason creatures like giants, cyclopses, etc are almost never seen in actual armor and at most wear normal clothing. The amount of relative weight a creature can lift scales negatively in proportion to its size past and below certain limits. It would just be too much for them on their own strength.

This is still manageable for our weight class: This will be hard to move in without some support hydraulics at the very least: 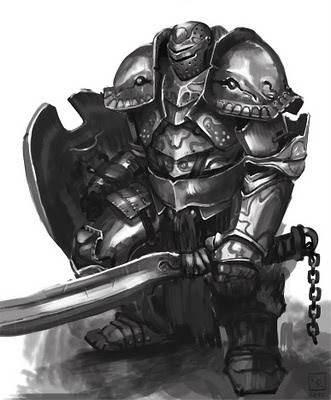 The issue with your assertions would be that the armor would need to get exponentially thicker as you go based on the armored design you are showing above, which is fantasy. Your other assertion that the weight exponentially increases based on size is only partially true for 1-3 feet. Slick armored crafts are entirely feasible considering the size mutations increase one’s strength. Encumbrance is already the factor which influences the weight factor for movement, and weight is another factor to being able to move bar-none.

If we say that the armor is ludicrously heavy, that being a metal, and even doubling the weight for a simple increase of 2-3 feet, that would not even breach a full 100 pounds of weight. It should be assertable that we wouldn’t be talking about this level of weight regardless. Plate armor normally go somewhere between 30 and 60 pounds, or something like 15-28kg in the (Insert European Joke) measurements.

That weight is distributed very well across the body, and a scaling strength stat due to the Large and then Huge mutations adds another 4 strength on top of the norm. Considering that these two mutations increase your natural strength by 4 points, which means an increase of 36lbs of carry weight, or something like 15.5kg, that means the excess armor weight can be mostly mitigated due to sheer increase of mutagenic muscle mass.

Furthermore, the Chitin Body Armor comes out to just under 6lbs, or around 2.5kg. Even if you scale that to 20lbs, it’s entirely feasible. The leather body armor is half of that. The Fullbody chainmail is 33.26lbs, feasible.

The Plate armor, the piece that I was referencing? 24.25lbs or 11kg. Even if we were to double that weight, which is some serious heft, it’s worth to consideration that someone who has mastered fabrication and manufacturing at skills of 10 and 10 respective would be capable of designing a piece that suits their effective size. We, furthermore, do not know whether or not the Huge stat makes us 10ft+, or just something like 8ft.

The Guinness World Record armor is something short of 7ft and was entirely functional. The basis that larger armor becomes fantasy isn’t functionally accurate since the size we are speaking of, that being the Large and Huge mutations, are essentially pure size increases based on muscle mass.

A Human being is capable of carrying thousands of pounds in short bursts, and a character in the cataclysm that has a Strength stat of over 15 should be able to wear a suit of armor that weights anywhere between 40 to 60lbs without issue if they forgo being a packmule for stuff.

A creature that bypasses the 20 threshold and could contest world’s strongest? Even if the weights go into 100lbs, which they never would, would be a non-issue.

Increasing the armor by one to three feet to encompass the larger body mutations is entirely feasible and not nearly as fantasy as being conflated by your argument.

Cataclysm’s crafting is about choice to begin with, and if a player wants to wear a 100lbs suit of armor made of metal plates to suit their superhuge form, then they’d be able to craft one up and deal with the 45 encumbrance or whatever it gets balanced as. I’d probably say even the Plate Armor wouldn’t break 40 considering the base forms of Chitin and Plate don’t break past 30.

My petition to have XL versions of the Full Body Suits stands as both rational, beneficial, and for the sake of user enjoyment.

We have to remember that these characters, even with the Huge mutation, can go through doorways, which means they don’t become Fantasy Giants. They just can’t fit through your standard window due to bulk. Since humanity already has been able to create suits of armor that reach towards 7ft, it isn’t impossible that, once need arises and skill suits the demand, that an XL body suit of the three requested materials, Leather, Chitin, and Steel, would be feasibly crafted by an avid Survivor.

Even if it’s only feasible with some CBM influence, which shouldn’t be necessary, we insane Cataclysm wanderers will be willing to do just about anything to meet the demands of our random quests. My present quest is acquiring XL armor suits to return to murdering creatures with my fists lit ablaze with passion and fury against the Apocalypse.

But a good set of armor out of something like steel? Pure fantasy and your guy will not be able to move in it if it doesn’t make his skeleton collapse under the weight, even if a little bit of it can be handwaved due to blob influence.

With all due respect, that’s not actually historically accurate. If I might submit: 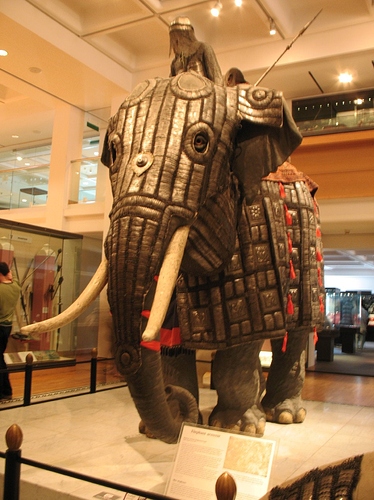 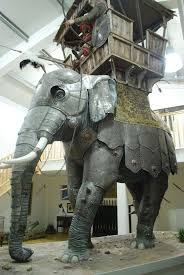 Although, of course, there’s significantly greater biological difference behind size upscaling than merely enlarging the dimensions; and doubtless engineering changes behind armor upscaling as well (e.g. size and type of fittings).

The hole in your argument by using an Elephant, which uses four legs to hold its weight, as an example is a bit weaker than intended, sure. Though, the sentiment is entirely correct, the average Joe, as long as the weight is distributed appropriately, can carry a rather noteworthy amount of weight on their body with rather suitable function. Anyone getting defensive about weight and what-have-you is going to mention that, so let’s just rip that band-aid off and add some clarifications there~

The equivalent between the Elephant example and the human example is that both forms of armor take full advantage of spreading that weight throughout the entire body. Only a few pounds of metal would be going to any one limb for mobility, and if a human being that weights 400lbs can still walk, a very, very fit warrior of the Cataclysm with strength mutations can do jumping jacks in a 80lbs Suit of Knight’s armor darnit!!!

I will submit to the comittee, however, that he will not be running a marathon… Man Runs Marathon in under 8 hours in Full Chainmail

The hole in your argument by using an Elephant, which uses four legs to hold its weight, as an example is a bit weaker than intended, sure.

It’s true. I expect you’d have to skip the howdah

Always have to craft your arguments without holes, or acknowledge them if and where they come. Lest the opponent nit-pick on the minor flaws and avoid continuing a losing argument.

Our request for an XL suits of armor for the big three crafting recipes is entirely within reason, so let’s avoid tangents that can be picked~~ ^-^

Saves the dev’s time too when having to read through all of the arguments and details.

Why don’t you add the recipes?

I’m able to afford time in small patches to log the idea, but pushing the time to figuring out and filling out those templates would distract me from other things that I’m working on.

Coding’s bad with my brain chemistry. I figured I would be doing more benefit by logging my ideas than not saying anything at all. If I ever find the time to sit down and slowly slot through the values, I might, but I take substantially longer than necessary handling things like this. It’s not that I’m not aware, it’s that I can’t afford the time to do so.

Typing words, however? That’s part of my profession. This entire blurb only took me about a minute to write~