Why does my graphical overmap installation spew errors at the start up of the game?

I moved the files to the correct areas (new font to config, that .png to the data/font) and it still spews errors. I don’t understand. I moved them instead of copying them as some other posts mentioned when I searched it up, but it still spews out font width 16 errors and that.

Heres an image of some of the errors, 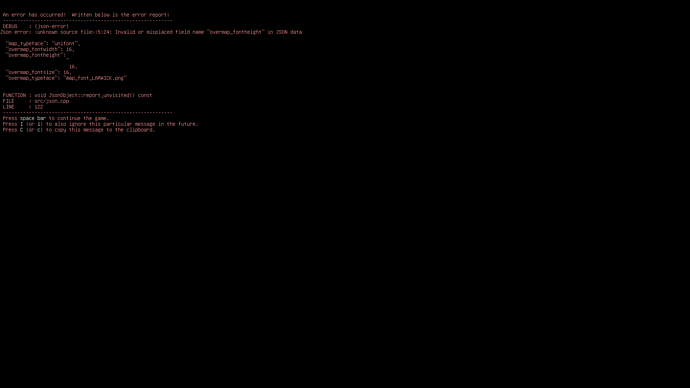 I made a forum account to ask this as its going to drive me to insanity if I have to look at every nook and cranny of the world wide web to find answers.

Could you provide more information?

When reporting bugs or potential bugs, it’s always a good idea to provide as much information as possible.

Did you follow the instructions in the readme file inside the mod folder? You’ve written that you’ve moved the font file, but did you rename it too (not that I see that causing this error, but it’s still possible)?

Latest expirmental build for windows. I saw a post on the forum saying fonts.json needs moving to config, did that. Then it said move map_font_LARWICK.png to data/fonts, I did that. Thats all I did, theres that a seperate folder in the graphical overmap download (graphical overmap/data, a folder called ‘mods’), I didn’t touch that.

In the future, please put an actual build number. It’s hard to keep up what latest means when the game updates every 8 hours. For now, that’s fine.

Then it said move map_font_LARWICK.png to data/fonts, I did that.

The question is, where did it say that? If you go to cdda\data\mods\Graphical_Overmap, there should not be any .png file. So it’s very likely that you’re trying to install an older version mod onto a newer version of Cataclysm.

You probably want to start with a fresh installation and use the graphical overmap mod that comes with the installation (as in: the one in cdda\data\mods\Graphical_Overmap).
You might be able to rescue it - although I still do advice a fresh install - by overwriting the current fonts.json file in cdda\config with the one found in the mods folder.

wait the launcher install/game install comes with the stuff already packaged in? I thought I needed to download the one from the github, maybe thats why it didnt work (19 months old).

Thanks for the response, will do a fresh install as I haven’t started any games on it and so nothing is lost.

So how would I convert it to the json file type from the text document?

Then you’ll have to rename it from “fonts.json.txt” to “fonts.json”. It will warn you that changing the file extention might end up screwing stuff over, but in that case, it’s necessary to change the file extension.

Ignore last post, was stupid mistake of mine, didn’t add mod to world.

It works now, no errors and nothing going wrong. Thank you!

Great, glad I could help