Here is mine. They couldn’t just let me work on my vehicle in peace. Chokepoints ftw.

Every tile on my screen with a zombie,MALL parking lot ._.)

Ever been to an underground sewer vault? Full auto is not enough, full auto will never be enough, setting fire to the entire corridor isn’t even enough. Every inch is nothing but wall to wall nightmares that bleed out of existence on death only to re spawn behind you. It’s a good thing they dropped so much ammo and there was loaded humvee’s to blast away full auto .50 cal into them with. Didn’t make it too far in, just too many of em.

Just trow an mini nuke,I carry one of them on my trunk always

Been there, horrible place. I remember breaking into some area that was connected with the sewer, like a control room. Thought it looked pretty interesting, stepped through the door into a corridor, wall to wall glowing mobs on both sides. Mfw.

I was testing out some stuff with modding in a purely DEBUG character and managed to teleport in the middle of a giant horde of zombies. 99% of the screen was filled with them.
There was a bunch of hulks, necromancers, survivors, brutes, military zombies, and more.
Thank goodness it wasn’t a legit play right there.

That is the only time I used the kill all monsters in a legit playthrough.

My potato would’ve frozen solid just from the thought of it. Holy fucking shit. 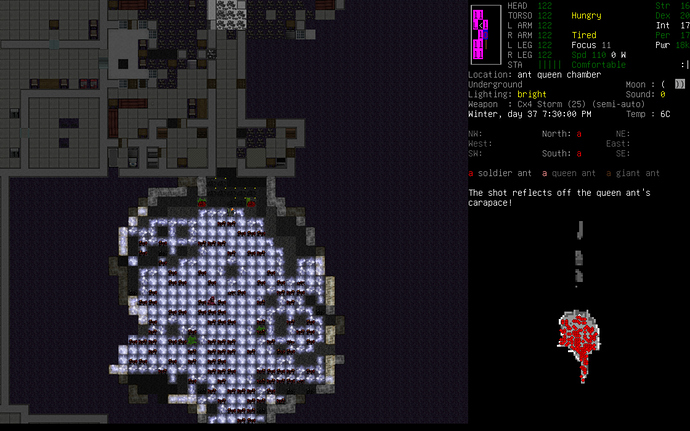 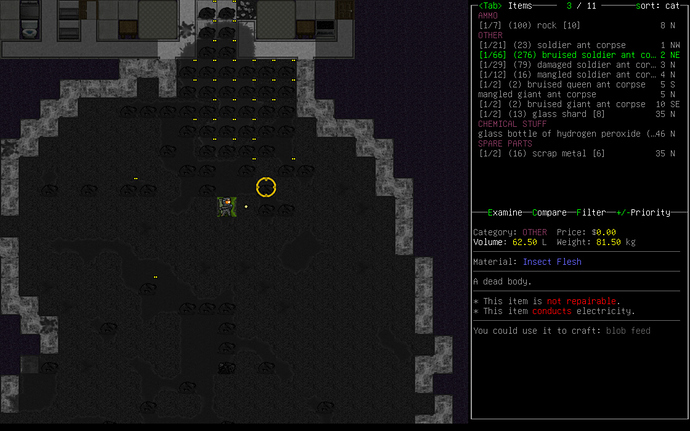 Gosh I think for me it was a couple hundred, somewhere between two and three hundred probably. Took multiple in game days to clear. I think it was the only time I built a survivor rocket launcher. And let me tell you firing it was actually pretty satisfying. Just a nice cube of zeds turned to giblits. Not very resource efficient though, and I had to kite them three or four tiles away to get a good firey chokepoint.

I’ve purged one of those vaults too. I stopped trying to shoot them after I blew through 50k bionic power using my laser rifle. After that I returned to my tank to recharge, then went back in wearing power armor+uncanny dodge+krav maga and just beat them all to death.

Wow, aweaome.
What was that weapon you used? The first pic is too small to see

A Cx4 storm rifle with an attacted sword bayonet, not the most powerful rifle since it only uses 9x19mm but I’m fond of them and the ammo is easy to come by.

Went to the bottom To find this fine mess and rather than attempt to kill them I took a quick retreat; however my ballsyness got the best of me and I tried to gone down…
''The stairwell is blocked by a Soldier Zombie"
Ummmm ok… well, there is always more than one way to get to the bottom of a missle silo, so I decided to jump down to the bottom from the floor up with a m2 Law, shot at the one shocker zombies, who went satisfyingly splat.

But then I turned the lights on to find the absolute horde thaf had assimilted, and surprisingly it wasn’t the zombies that almost killed, it was the insane amounts of rads.

Got to about 56 on radiation, and took me 753 turns just to move, so I almost quickly died to dehrydration…

NOTE: I didn’t even have ammo for my main guns, so I basically just relied on penjak sylat and a powered quarterstaff to get most of them… ahhhh the power of kiting…