What's a good way to dispose of bodies quickly and efficently?

So I just cleaned out a hospital (I think? Hard to tell with hospitals) and now I have to deal with the problem of disposing all the bodies. Manually going through all the piles of corpses to pulp them is meticulous and I always end up missing a few, plus i’m worried that by the time I finish smashing half them they might just get up again and i’m running low on explosives…
Is gasoline flammable?
I tried setting them on fire but it seems that it didn’t catch. 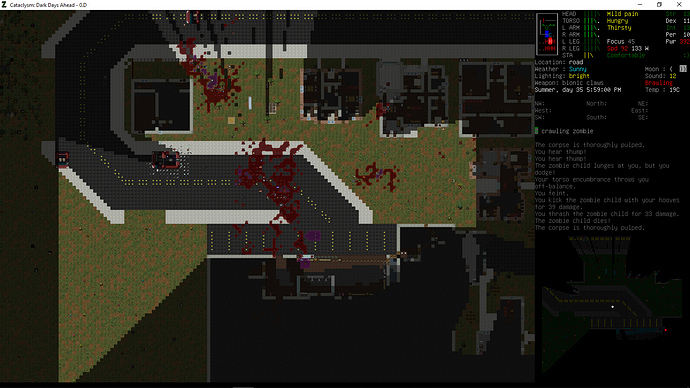 If you managed to kill most of them inside the building, i would dare to suggest that you loot everything you need, and the burn the building.

It won’t solve your immediate problem, but an NPC companion set to smash all the corpses they can see after a big battle does wonders for freeing yourself up to do important looting.

I turn some sheet metal into braziers, pile all the bodies into a deployed one, toss in some wood from nearby the fight, and set them all on fire. Move the bodies over to the brazier using the Adv Inv system helps me sort through the gear, too.

I suggest using a massive contraption with two rows of scoops (for collecting the items) plus one row of rollers (to crush the bodies), plus a mounted flamethrower for good measure.

Also, make the vehicle be steam powered, and put several kilns. Dissect the bodies, throw the bones into the kiln and make the zombies power your apocalypse.

Without any context, people would worry about seeing a thread like this.

I want to reiterate the immense utility of an NPC follower whose job it is to deal with corpses. They are really on the ball for anything in line of sight

brazier’s and fire are teh way to go. use the haul items feature to easily and quickly move items along the ground, it’s waaaaay better than the old method of using advanced inventory over and over and over.

I used to do this from time to time, my method back then was usually to move corpses out onto the street and put them into piles, and then cover a block of nine tiles with one 2x4 each, then light them all on fire, resulting in a raging fire that would consume all the corpses.
The key to getting a big enough fire seems to be to light neighboring tiles.

there is a auto butcher/pulp option

The key to getting a big enough fire seems to be to light neighboring tiles.

Yeah, this is important for some reason. If you make a single tile stack of bodies and stuff, it’ll usually just sputter and choke out after a few minutes - but if you make a 2x2 square and light them all, it’ll generally manage to take off and incinerate everything. Not sure why this is. Same thing for igniting fungal fields - a 2x2 ignition area will get things moving.

This is honestly kind of weird. Not sure what the code is doing with this. A huge stack of fuel in one tile should burn approximately as well as 4 adjacent tiles - IF you can get it to burn at all.

EDIT: They seem to have reduce the spread rate of fire from last time I checked, and it can now be pretty hard to get corpse piles to burn at all. I suspect this has something to do with the change in turn rate times (6sec->1sec/turn). Anyway, burning corpses seems quite hard now, so I wouldn’t posit it as an efficient method any more.

Become a rat man and eat them