Not sure if this is a base item in 0.E+ experimental version, or if it’s from a mod (maybe Blaze?), anyways, it’s called “wiring” and it say it’s a length of heavy duty copper wiring useful for routing power.

Is there a new power routing system? I think it would be rad, although it takes a regular wire instead of copper wire which seems wrong.

I saw something from kevin somewhere where he was talking about how vehicles having forges and welding rigs was ridiculous and that it was only like that as their was no power system that didn’t involve vehicles and they were planning to make actual stationary bases be a thing (and not vehicles made into a stationary base) and they talked about a wiring system needing to be put in to make a place have connected power. So I guess the wires were put into vehicles (probably on accident) as part of some sort of test of the system

Well that’s silly, because vehicle mounted welding rigs are NOT ridiculous and are real things that people actually have and use now. @kevin.granade in case @games_and_glory is correct and that you weren’t a fan.

And seem that they’re likely to become more prevalent as more electric vehicles come out and the battery technology gets better for larger instantaneous current draw.

Same thing for a forge, you can definitely make it work though the duration you’d be using that over would kill a battery much faster. It would make more sense to have a propane powered forge onboard a vehicle.

I would be quite happy to see base power and such, but having looked at the construction code I think that’s still an awfully long way off.

Electric works and is a thing. I agree with you. Gas rigs should be a thing though too. You could have a flatbed lined with long gas tanks and grid them together. Add them like a Vehicle Part. Under, inside of or atop your ride. Run the line over a Gas Welding Rig / Gas Forge Rig and voila. Mobile tanks are cool and all for carry purpose. But making them as patched together vehicle parts should be a thing. It also would require refilling via portable tanks or stations. To which there are quite a few refill stations in New England. Many can be found just driving back roads.

Would be a nice edition of a back woods road, if such stations existed in game. Another building idea would be Mulch and Gravel. Storage units are also common in the backwood places.

Yes a welder can work, the thing that’s silly is the strictly battery powered welder.
I don’t agree about the forge, you can physically fit a propane forge or something into a vehicle, but they shed prohibitive amounts of heat, dumping the waste heat from a forge into a mostly enclosed vehicle is a recipe for heat exhaustion.
If you have a bigass flatbed with a forge set up on it, sure thing, but the existing components are unreasonably self contained.

Honestly we need to be able to make forges emit heat and smoke when operating, and have that particular heat and smoke field dissipate very rapidly when outdoors. When indoors we could add a vent furniture that dissipates it less rapidly. If you want an enclosed forge you have to install enough vents that you don’t asphyxiate or overheat.

This would also encourage people to wear respirators while smithing, which is a thing real people do.

Would it make sense if we tab into the vehicle heater function for that? As it’s basically that, isn’t it? It heats the car and the surroundings.
Or use the vehicle cooler function to generate warm air and reduce the amount it generates if a muffler (in place of your suggested vents) is added?

[…] the thing that’s silly is the strictly battery powered welder.

I’ve always imagined it as a cheap spot welder run directly from the battery.

I’ve always imagined it as a cheap spot welder run directly from the battery.

Yes it’s exactly that, but you can’t do the things you do with the welder in-game with one of those.

Yes a welder can work, the thing that’s silly is the strictly battery powered welder.
I don’t agree about the forge, you can physically fit a propane forge or something into a vehicle, but they shed prohibitive amounts of heat, dumping the waste heat from a forge into a mostly enclosed vehicle is a recipe for heat exhaustion.
If you have a bigass flatbed with a forge set up on it, sure thing, but the existing components are unreasonably self contained.

A friend of mine has a mobile forge system in the back of a cube van. Heat is definitely the issue, but exhaust of fumes is more the big deal. You can definitely manage most, in fact many stationary forges are setup in somewhat confined spaces. This should definitely require either doing it in a gas mask or having some serious exhaust setup for sure though. Also feel it needs to take up more than just one tile in a vehicle.

Well you can actually use a car battery to weld. You can also daisy chain them together and get better performance out of the setup. As in, if you chain several together you can use the setup to weld just about anything that is not a 2 inch bulkhead on a sail boat. You can also do serious welding with a tesla car without a doubt, seeing as the battery system runs the entire vehicle. You can most certainly weld 100% off of batteries. 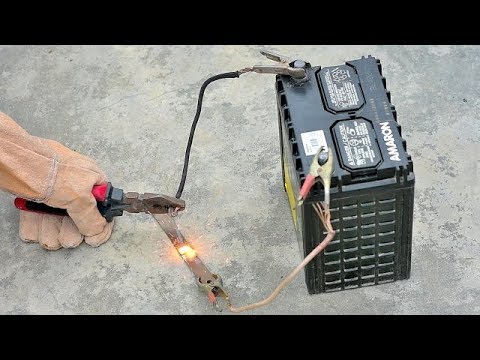 As for a forge. If you install a blower fan vent in the vehicle and use insulation, a forge can be perfectly capable of being inside an enclosed space. Hot, yes. But not kill the occupant hot while using ventilation. Even opening all the doors and windows would be enough if insulated. You can make a coffee can forge using a handheld propane tank. How do you people nay saying think you use a stove in your house without burning the building down? A standard home stove can be touched without harm over 600F. Using a blower(even a hair dryer) inside a forge using propane or other gas will provide heat enough to work steel.

The point is not to prevent people from having such a mobile base with such tools. It is a question of how do we change the silly game mechanics as they stand to better fit the reality of having such tools to work with. Youtube is not just anecdotal either. They have good examples of many things proving both electric/gas welding and forging can be inside a small vehicle. Not just a huge honkin flat bed either.

Focus should be on insulation, ventilation and blowers to enhance the heat while venting it.