I installed two empty 60L vehicle tanks to my immobile, home workshop and tried to fill them up with water (frozen) collected from the rain. I utilized the vehicle menu UI to fill the tanks. Then I got this error from the game. 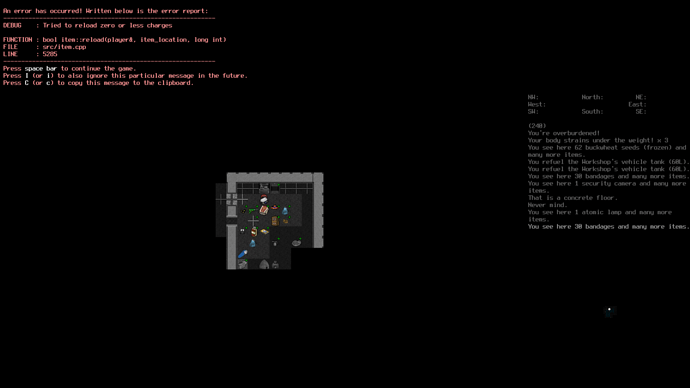 Later, I tried filling it with water (hot), a plastic canteen amount of frozen, cold, and hot water, and still cannot fill the tank up. After exiting and entering the game, I believe the frozen 60L tank of water disappeared out of the game. The game started out with the nut update (#7978?), and I kept updating to update #7995 as I played.

I have not tried any other workarounds or other liquids than the ones I have mentioned.

I believe this is a new bug introduced in the recent builds because I was able to refill vehicle tanks with water in pre-#7878 build.

I thought this was fixed in a recent update. I’ll see if I can replicate.

I just made a new world and recreated the scene with spawned in items. Same issues on the new world in experimental build #7995.

I created an issue post in the github to hopefully spread this issue. If you can or cannot reproduce this issue, please comment below. The steps to reproduce should be simple as it requires a few items (according to me)
Link to GitHub Issue

alanbrady has found the issue as of this moment, this issue should be fixed soon. Until the fix, you can work around this by using a funnel to fill rainwater into a vehicle tank (non-universal method), or [Unload] the container of liquid and [Refill nearby vehicle] (universal method, un-tested).

Oh cool, i’m not the only one experiencing this.

This new update changed something, just different line number for this error. 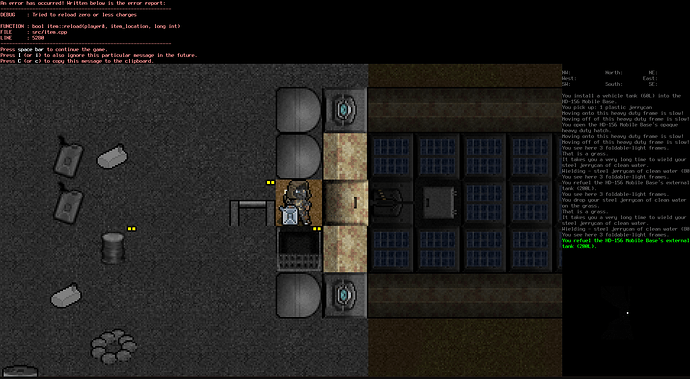