not sure what causes this at all, it seems to happen at random.

[Album] Imgur: The magic of the Internet 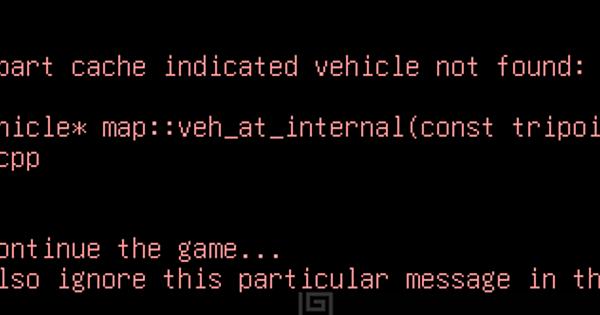 I think that is the vehicle additions pack mod that causes that, or maybe tanks(blaze mod?).

I’m fairly new and this was the first error I ever saw, and the one I still get on a daily basis. I went on the CDDA discord help channel to ask about it as well as made a post on Reddit, before finding this forum I believe, and was told to just ignore it, that it’s not a big deal.

I get it all the time, and believe it has to do with turrets. It seems to happen if a vehicle with a turret comes inside your reality bubble, but that is just my guess. Something with the ammo not being fed properly and you have to manually reload, but again I’m not 100% sure, but seems ignoring it is fine for now.

I hope linking to Reddit threads is OK on this forum, if not I am sorry and can remove the links.

i think there’s three of them with different vector coordinates at the end of the top line beginning with debug when i saw that, i’m pretty sure it’s not something entering or leaving the reality bubble as it never seemed to happen while i was in my car driving personally, that’s one thing i considered at first is that it was a new vehicle being loaded.

actually, you know… depending on how sensitive the reality bubble is to where you’re standing walking around looting may load and unload things, i suppose, not really sure though, i’m pretty sure i haven’t seen that message when crossing even a middling distance though, typically just across the street type of things is when i saw it.

Yeah I’m not sure on that really either think I saw the same fix but am just using the launcher version for now.

yeah i’m using the launcher one as well.