So I have been considering making a simple mod/PR and thought a good starting place would be trait balancing. There seem like a number of traits that are quite out of balance in terms of points. Here are my thoughts on some, what traits do you think need tweaking?

Addictive Personality: This could be just my play style but I have never had an addiction in game and never been tempted to mess with the addictive stuff, so for me this is a free 2 points. Given that its counterpoint is only 1 point I would go about making it only worth 1 point also.

Pyromaniac: In my experience this is a -1 to morale with added bonuses for lighting fires which is easy to do frequently. The moral penalty stacks but I’ve never seen it get very large. Given that bad temper is also 2 points but is a constant -10 to morale, pyromaniac seems stupidly good to me. The easy fix would be to maybe make it 1 point, increase in negatives faster and nerf the bonuses.

Fleet Footed\Quick: I love these and almost always take at least one. Which leads me to suspect they might be a little too good. Increasing the point costs seems a little harsh, and the numbers are too round to change much but I feel they could use a tiny nerf though I have no idea what.

What are your thoughts on trait rebalancing?

Stylish needs an overhaul too

IIRC forgetful also effects your ability to memorize the map as well.

In regards to addictive personality, avoiding the negative froma a negative trait is… common sense? Do you use submachine guns with trigger happy?
Forgetful also makes you forget map memory faster iirc?
Fleetfooted/quick are nice but not the essential, you can pick them up from mutating and robust genetics is cheaper in point cost?

On addictive personality, to clarify I don’t play any different with or without it, the addictive stuff has just never seemed that good to me. I’m wondering if I am alone in this or if other people use them enough that addictions happen and the trait is worth 2 points?

On mutation heavy characters I’ll try and fit in the opposite trait to avoid mutagen addiction, if I go heavy CBMs it’s quite common for me to pick up nicotine and meth addiction unless when I take it as a trait.

Edit: brain fart on what I was typing about

Addictive personality is probably fine. Getting addicted to opioids is pretty harsh and very easy to do if you rely on poppy painkillers, cough syrup, and sleep.

Addictive Personality is effectively free points from my experience. Should be worth only 1 point, or made much harsher and items you can become addicted to expanded.

Never played with Pyromaniac but I’ve heard it’s practically a positive trait, should be changed as you said.

Forgetful could be considered unfinished and until something is done with skill rust I don’t think it’s a priority to balance it.

Fleet Footed/Quick are actually overrated imho. Besides the fact that you can gain them later as mutations, it would be better to make combat less favorable than to change these traits.

A counterpart to Squeamish…I wouldn’t use it, even if it was 1 point. That effect could be rolled into Outdoorsman instead. Maybe if filthy clothing became more prevalent (e.g. from getting boomered/slimed), then I might use it…no, I still wouldn’t, but somebody else might.

And other traits that I think should be rebalanced…Far-Sighted, Near-Sighted, and Poor Hearing should each be worth 1 point, or somehow made harsher in implementation. 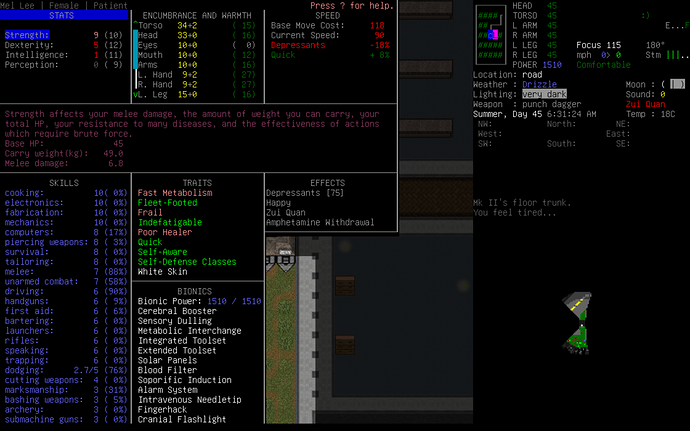 Honestly a lot of traits seem like they’re trying to make non-attributes like stamina, hp, morale, focus, etc. into attributes. When you have five different traits giving various bonuses/penalties to one stat, it’s time to just stick a number on it.

Meta issue, anything with, “rebalancing” in the description is a terrible place to start contributing.