Too weak to carry a secondary rifle for dealing with juggernauts

I’m playing as a weak (STR 10) and “flimsy” character who mainly depends on military weaponry to take out Zs (I use Eskrima with a Kukri for melee). Due to a severe shortage of 7.62 ammunition I carry a 5.56 assault rifle (SIG 552), which is light and quiet but not powerful enough to deal with skeletal juggernauts, particularly in close range environments like labs. I thought a 40x46mm grenade launcher might be up to the job but it turns out these deal no damage whatsoever to juggernauts - and will injure my team at a surprisingly long distance

I do have several hundred rounds of .50 cal though, and I found a Barrett anti-materiel rifle in a boarded up house which is highly effective against juggernauts, typically only needing three rounds before they go down. But this is a very large and heavy weapon for a weak character to be carrying around all the time when you also have to carry an assault rifle. If 7.62 ammo was plentiful I could stick with that as a compromise, but 5.56 just won’t cut it on its own. I’ve been toying with the idea of taking a hacksaw to the Barrett, but I’m worried I’ll ruin my best gun’s range and damage by sawing off the barrel. Maybe there is a better option?

Edit: Tried a few other ideas: 40x46mm grenade slugs do no damage, but shotgun slugs do and will kill a juggernaut with 12+ rounds, which is a lot better than the 30+ it takes with the SIG - but you’d have to carry two shotguns or find time to reload. Flamethrower works a treat but I wouldn’t want to use one in a lab… And .50 cal “tracer” seems to do the same amount of damage as .50 cal “ball” (was hoping for some extra fire damage). I also tried cutting down the barrel on my Barrett but it made little difference in terms of weight (bare weapon went from 12.95 to 11.70 kg, a 10% reduction).

See, your problem is that you suffer from the “gotta kill/shoot them all” disease that affects most of the playerbase.

You don’t have to kill everything you see. And the few things that you can/have to kill, you don’t necessarily have to shoot them.

Skeljugs are hard to shoot, plus they have good armour so it’s kinda pointless wasting ammo on them - especially 50 cal. If it takes you three shots of .50 call your character is either too far from the target, too unskilled to use it or you (the player) aren’t shooting with optimal “stability”. Though that’s beyond the point.

There are many ways to deal with Juggernauts in labs, one of them being… just trap them in a room you won’t have to visit anymore. They don’t go through metal doors, and, unless someone finally/already fixed it, they won’t smash through walls either (they definitely should though).

I will leave two solutions for the Skeljug in Spoilers if you care to try and figure something out yourself.

Lead the Skeljug into a goo trap. He steps on it, he becomes goo, and you can leave the room and lock the door behind you will the slime just happy globs away in there. “Goo Trap” can be replaced with “Deep Pit filled with Glass” and on fire. Considering how slow they are by default, it will take them ages to get out of the hole.

Solution 2: The best weapon in the game.

If you aren’t in a lab but you need to get rid of any creature that you cannot “shoot” or cannot damage, look no further than… “The Goo Canister”. Literally. This is the best weapon in the game, hands out. Relatively easy to find, stupid easy to craft and it will literally destroy anything in the game. I mean, sure, “but their drops will also be eaten”, yeah but who cares about filthy gear anyway.

The one thing that I mentioned early that most people seem to ignore: just walk away. Literally. They’re slow and their range attack cannot hit from further than 3 or 4 squares ahead of their position. You can safely walk them away elsewhere, then go somewhere else to lose sight and go back to your business.

Your “weak” character is two points stronger than the default…

The work around for the strength issue is to use a vehicle and have the circumstance based equipment there. When you encounter something your current loadout can’t handle, return switch gear, deal with the issue, and switch back. Pulling a foldable shopping cart with you can also help (although I use that for loot rather than optional equipment). A good thing about carts (and bikes) is that zombies don’t smash those, but push them aside or just walk over them, so they won’t get damaged.

The “Peace” solution works sometimes, but doesn’t far too often. Critters block roads and you can’t go around them because there’s not enough space. Sure, you can give up and get progressively more hemmed in as evolved insects claim more and more of the world, and give up on large swaths of the labs. Also, monsters lured away do not necessarily stay away. One of the big dangers of avoiding zombies is the appearance of a fox or similar creature that causes huge hordes of zombies to chase them around randomly, eventually causing you to turn a corner to a cleared area and find yourself face to face with said horde.

A good thing about carts (and bikes) is that zombies don’t smash those, but push them aside or just walk over them, so they won’t get damaged.

It was awhile ago, but I had a zombie hoard bash my shopping cart until it just exploded all the loot everywhere, destroying the cart.

I was exploring a fire house, triggered the zombies inside and was in a bad spot. I stood in a doorway with the cart directly behind me, blocking a bunch of zombie firemen, while I dealt with the ones in front. The zombies behind the cart must have started bashing it, since it was the only thing between them and me, until it was destroyed. The 100+ pounds of loot inside went everywhere, 3 tiles around, and the cart was, I think, nowhere to be found afterwards.

Maybe since then they have learned to walk over carts? I don’t know, but something to keep in mind.

Just carry a grenade or other scrapnel explosives with you and get really got and throwing them at enemies. One well placed grenade or pipe bomb will take care of any enemy in the game. (Just don´t thow them in forests as they might strike a tree and catch you in the blast)

I just tried to walk into my folded shopping cart, and you’re correct: I can’t. I can stand on it while it unfolds, but once I get out of the tile I can’t get back.
However, zombies generally push it out of the way, but I usually don’t hold onto it while fighting, so it’s an unattended cart.

@spicyshadow Interesting advice. I’ve never actually thrown any explosives in the game (Molotov cocktail against wasp nests being the closest). I’ll try to bring a grenade and test it out.

Interesting advice. I’ve never actually thrown any explosives in the game (Molotov cocktail against wasp nests being the closest). I’ll try to bring a grenade and test it out.

Thanks everyone for the useful input! I’m going to bring a mounted M2HB .50 cal on a folding cart back to the lab once I and my followers have recovered and rearmed.

As for avoiding combat this is what I usually do; I’ve completely cleared a town near my base and now have access to all the common materials I need, so I don’t bother with other cities - apart from high-value targets like banks and gun stores, which I try to sneak into at night with minimal fighting.

Labs are different though; I’ve seen enough to know I want to explore them fully - strange and amazing things may hide behind any door, or on the next level. But kiting and running away is easier said than done in a maze of corridors where you’re liable to run into more trouble than you’re running away from (and some Zs run faster than I do). I make use of doorways and furniture and I’ve learned to not even try to shoot once a Z gets into melee range; if this is about to happen I either run a short distance or switch to a melee weapon, ideally far enough in advance that I have time to wear my rifle first…

Which reminds me: if this was your available armor, what would you wear? 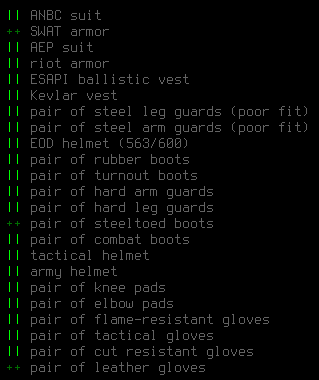 I know the EOD helmet is a great find, but the warmth and mouth encumbrance are major draw-backs. So bad in fact that I often have to take it off to [d]issect an interesting corpse without collapsing from exhaustion - only to forget putting it back on before combat begins again, with all too predictable results.