The most glorious battle in history

greetings to all fans of genocide, apocalypse and huge crabs capable of tearing the hulk to pieces (why are these crabs on ships so strong, damn it).

today we will have an incredibly difficult quest, I’m not sure it’s even possible, but I think it’s worth describing the situation first:
my character, 20-year-old Silver, started as a super soldier in an underground laboratory, she was able to successfully clean up a SUSPICIOUSLY empty laboratory (in terms of monsters), install (and replace) a large amount of bionics (at least repair nanobots and built-in tools), successfully escaped and began a journey around the world. But I forgot the fact that eating from recently killed animals allows you to gain extra weight very quickly, and 10 days have already passed since the start of the game (cities are full of zombie shockers, against which I am powerless). And I remembered that in my home laboratory there was a bionics converting excess calories into energy, and therefore I began to descend into the very halls of hell.

I’m ready to swear to God, it was the most terrible thing I could have experienced. initially, everything went just fine, I went down from levels 1 to 3 in silence, rarely meeting monsters that I hadn’t torn apart, a BLOB that I hadn’t killed at the very beginning. but everything changed at level 4: going to the autoclave to see if the necessary bionics were lying there, I noticed something that I could not even imagine. it was a hole in the glass. I must say I was very surprised that the armored glass was destroyed. After I didn’t find my bionics, I decided to go look in the following rooms. the oddities began. absolutely everything was missing on the floor and shelves. Absolutely. Soon I saw the culprit of all this-shoggot. After a little assessment of the situation, I realized that he had eaten everything clean, so I decided to lock him up and continue the descent. but before I could do this, I found 4 more in other places of my review, realizing that I can’t win, I decide to run away. after not the longest chase, I decide to leave the laboratory, but bad luck: shoggots have already been noticed at levels 2 to 4, and they are not going to stop their reproduction, I am not sure that I can already find the bionics I need, but at the moment I am more interested in the unt: how to defeat this very incarnation of God in a cataclysm among 80 pieces?

(Ohh, i absolute dont have long range weapon, i just not fount nothing that 4 grenades, 1 hacked turret with 6000 shots and 1 tank dron in that laboratory waiting me in weapon storage)

Oh my, now THAT is a bad turn of luck. Without a massive arsenal of heavy weaponry, I’m afraid my only advice would be to get out of the lab and move to a new neighborhood far far away. On the way out of the lab, destroy or block stairs if possible and seal off the main entrance as best you can.

The few times I’ve tried to fight those things were actually pretty quick and easy. The fight was quick and starting a new random character after I died was easy.

Killing them requires weapons that deliver huge amounts of damage very quickly, as they have an insane regeneration rate (there aren’t many weapons that consistently deal more damage than the per turn regeneration rate of this thing) and a large number of HP. I’ve cleared out a somewhat contained infestation (2 or 3 old lab sections with maybe a dozen or so shoggoths in total) in 0.E-2 using a weapon I don’t know if it exists anymore: a rebar throwing railgun fired at the maximum firing rate at a point blank range. After each kill run out through the doors, close them, and reload the (bionic) UPS storage and the gun. Each kill required 3-6 hits (and I’m not aware of any misses happening, and the 6 shot sequence indicated a hugely inflated HP value, as none of the hits was below the regeneration rate). Approaching from different directions would allow you to go through a door without it immediately being blocked by a shoggoth (whose corpse would then block the door from being closed). I think I was helped by pits in the floor that slowed the monsters down.
It can be noted that they never spread up the stairs that were present in the room most of them were in (on the other hand, zombies in basements are also hard to lure out).

Until you’ve got weapons that can reliably deliver the required obscene amount of damage (never below the regeneration rate) in a short time (or something that can kill them outright, making regeneration a non issue), your best bet is to stay away so the reality bubble doesn’t include any of them.

It can be noted that shoggoths can’t destroy the lab metal doors. The original shoggoth was probably released by a building smashing zombie smashing up the place, and while I think those can’t destroy the doors either (not sure, though), they can smash up the walls, providing alternate passages.

Ohhh no, shoggoth cant destroy metal doors, he can destroy armored glass and glass doors. But when i tryed to survive in laboratory i opened all the doors on my way, thats why shoggots spread on all laboratory

I used to open all doors, but now I only open one in each pair to allow me to close them off should I need to, while leaving the open doors as markers that the tile has been explored (I also apply notes to each tile).

Shoggoths can’t destroy the glass of their original containment cells, so I’m not sure about other armored glass either, but regular glass walls can be smashed by almost everything.

this was definitely done by Shoggot, in the room from where he escaped, only he could break the glass. ordinary cyborgs and MIGO couldn’t do that

In the cases where I’ve had shoggoths escape a place wrecking zombie had most likely caused them to escape. Sometimes these zombies kill themselves in the pits they create, and if a released shoggoth happens on such a corpse no evidence would remain.

But that room perfectly clean. All monsters that borned on 4 lvl-micus (i burned it), 1 Mi-Go, shoggoth and kiborgs (3), no zombies, also need say that all zombies died from robots (spider shokers), sooo that not a zombie

In labs there are only 3 things that can go through Armoured Glass:

So what may have happened is one of those may have seen the shoggoth and tried to engage it. Died, got consumed and let the shoggoth free.

How do you kill them? Referred to above: heavy loads of quick DPS to outpace their regen skill, otherwise, just go somewhere else. They’re worth nothing.

EDIT:
to add to above, Shoggoths multiply by stepping on items (corpses are an item) once certain conditions are met. So chances are that it just stepped on everything while wandering about in the lab during your absense.

the problem with all this is that there were absolutely
no holes in the walls in the complex (this is not a creature from the outside), the only option could be a zombie hulk-but it was in this room, it was in it that there were only 3 spider robots and 1 MI-GO. in addition, the game started 6-7 days ago (the monster evolution setting was not touched), hulk on day 6? this is something new

The fact you did not see them does not equate to them not existing.

Giant Mole Crickets and Giant Naked Molerats are very much good of hearing and they will follow any noise they hear to ridiculous distances, and, in the end, be easily killed because they can’t do any good damage - and then have their bodies eaten. Which is why I suggested one of those could’ve been the culprit, even more considering how you could’ve skipped them if you haven’t explored the entirety of the lab. Especially seeing by what you posted: you said there was a hole in the glass, so, by omission, something broke it and again: Shoggoths cannot break Armoured/Reinforced glass furniture under any circumstance, period.

It would probably be nice if you posted a screenshot of the location where the shoggoth was imprisoned before it was let loose.

The reason I eliminated the shoggoths in my old game was that the finale of the lab was just one door away from them, and it was something I didn’t want destroyed as I wanted to retain the option of returning to it to make use of it, and I also didn’t want the things to find the stairs and use them, spreading out of control (again, denying me the option of using the finale). I think the walls to the finale was smashed through at some point as well, so closed doors wouldn’t be a complete protection.

yes, shogot can’t break, he can’t, but I have researched ABSOLUTELY the ENTIRE laboratory, let me remind you that I started as a bionically modified soldier, it costs nothing to kill ordinary zombies/cyborgs, which I did, but I mostly run away from robots, at the moment I will try to create a copy of my world and already there to show what the place of shogggot’s imprisonment looked like 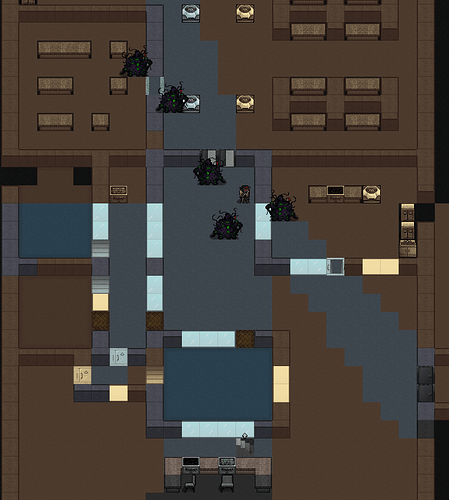 Looks to me like the thing in the central containment chamber broke free and smashed its way to the shoggoth (they’re usually(always?) in the second chamber from the top on the left side (given the rotation above)). There it was probably quickly dispatched by the shoggoth, which then proceeded to consume the corpse, leaving no traces of it.
The thing in the central containment chamber is usually (always?) a zombie.

Note that zombie evolution is based on probabilities, so it’s possible to get a top tier zombie extremely early.

If there was a Brute in that central chamber IIRC it could have evolved into a Hulk.