Hi. Normal start, survivor. Start of spring 0. By F2 it displays a temperature of -2 C. By Shift+2, it “feels” -57 C!!! How so! The character manages to wrap himself in a rescue blanket. But when you try to scramble for example balaclava, which is still far away, and arafatka and turban do not save (head, mouth) passes time.
I even flinched when a character with a terrible scream died ((( frozen jaw. Realism? I don’t think so.
Can you please tell me who’s to blame and what to do?
Cataclysm-DDA experimental build 2022-06-21-0605

Spring 0 is still basically winter, so it should be fairly cold (there’s a reason the default start is spring 60…). Unless you mean standard spring start at day 60 in year zero.

I don’t understand what “F2” and “Shift+2” is supposed to mean, but if you’ve got meteorological means to measure the conditions you’re show the measured temperature as well as the wind chill adjusted temperature.

-2 seems like a reasonable morning temperature for day 60 of spring, but a wind chill adjusted value of -57 is extreme. I don’t know what kind of hurricane would be required for that, if it’s even possible.

I fail to understand the part about passing time.

Thank you for your reply. I think the pictures will help you understand what I mean. 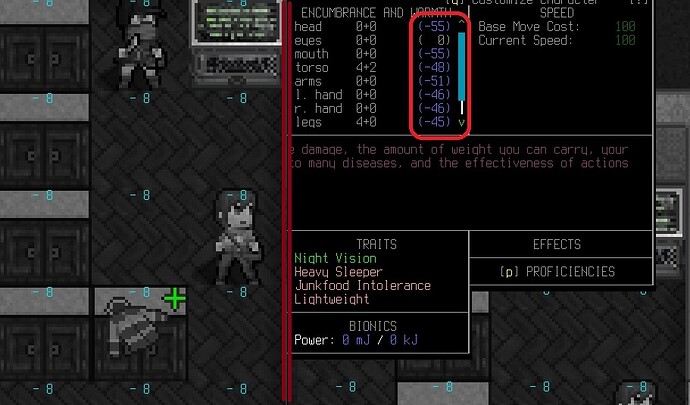 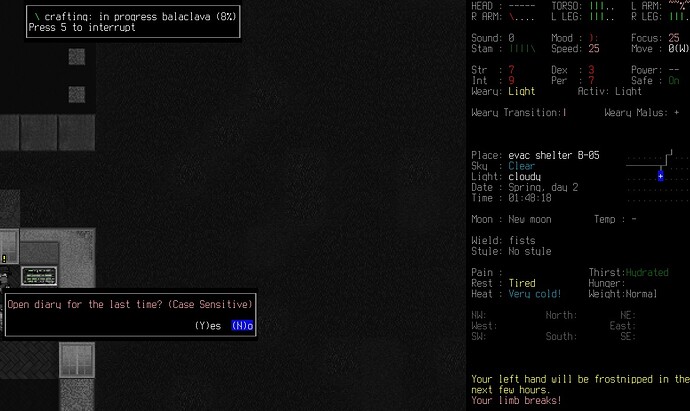 Reproduced on my end. Default start as survivor at day 0 produced the same values. AFKed until death of cold, took me 18 hours. My death was no pleasant.

Overall the situation is survivable, if you build a fire and sit near it you won’t suffer from cold effects as much which gives you time to gather and craft better gear.

The only thing left is to confirm whether the values are expected or should be tweaked.

The values for the limbs are not in degrees, but in some other relative unit, where 0 is when you’re at a temperature balance vs your current surroundings, negative values that you’re cold, and positive values that you’re over heating. Adding more clothes when you’re freezing will bring the numbers closer to zero, while adding more clothing while the numbers are positive will cause you to overheat more.

It seems you tried to craft a balaclava with no skill, and finally froze to death at two in the morning the day after the next, losing health on your limbs due to frost bite.

It can be noted that the temperature in basements is always a steady 6 degrees Celsius, so your character would have been better off going down there to craft (but would have the issue of getting light: I think there are some flashlights at the shelter, but flashlight batteries run out quite fast in CDDA, for some reason). Also, crafting without any skill is very slow (as you saw), so that starting date is probably always going to be very difficult.
You probably need to hop from fire to fire to keep warm while trying to scavenge warm clothing.

I tried fast forwarding the time of my save to day 0 year 1, and the temperature was -6 degrees Celsius (once the game realized the date had changed), which is about the same as you’ve seen.

Thanks. It’s a good solution, but time consuming - getting firewood. You can’t build a fire indoors or in the basement, and rain and storms disrupt plans. I will experiment

You can build a fire inside if you have a container for it, like a brazier. You just have to find some sheet metal… which can be found inside shelters if you know where to look/disassemble.

Right. A barrel for making a fire and many other things. You need a homemade hammer to make a roaster, just don’t have time for everything, it’s very cold )

I’m very ashamed, it’s cheating and ruins the whole experience. I had to fix the quilt parameters to start surviving further. This is a temporary solution. Created a new world “test” try variant with the fire, it works, but there is a dependence on the start (food + water).

I don’t think it’s a good idea to try to remain in the evac shelter exactly because the amount of food and water is limited. I’d try to find an isolated house to scavenge clothing, grabbing some branch along the way for fire. Using the default start of day 60 makes the cold unpleasant, but generally manageable.

My standard start has me find an isolated farm or cabin with a pump outside and use that as a base for excursions for more items, but anywhere with a limited monster presence and unlimited water is good, in my view (some trail heads have water pumps, for instance).
Note that farm barns tend to contain a legion of zombies (I reduce the numbers to somewhat reasonable levels, rather than 20-30).
If your chosen location has a fire place that’s a great bonus, especially since the go-to usage of an oven has been removed.