I think I just encountered a bug, but I’m not sure how it happened. I’m pretty certain these pancakes were normal before being stored in a fridge, frozen, and reheated a couple of times. Now I’ve got two of the original stack of ~12, and they’ve both grown to about eight times their original calorie count. (191 calories is what is should read)

Update: I’ve also got two stacks of pemmican, one at the standard 434 calories per serving, another at a whopping 1,979.
So yeah, something is definitely screwy in the latest build. I made all of that pemmican in one batch a few days ago, so some of it has been affected while some has not. It’s got to be something happening after the initial crafting. I’ll have to see if I can figure out what’s going on and open an issue. That might have to wait until tomorrow, though.

Im going to take a shot in the dark and say that there is a mechanic thats supposed to make some foods loose nutritional value on being frozen/reheated that is occasionally misbehaving. Making it either gain value when its supposed to be loosing value, or returning mushy loss that was never lost in the first place.

I think I encountered a similar bug… 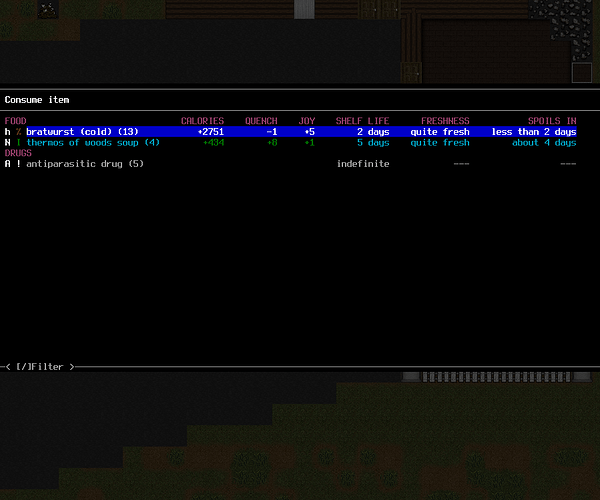 … The context of this seems the same as you as well, after freezing and reheating once or twice they ended up like this.