[size=8pt]My idea is in relation to when a new world is generated. As it currently stands, whenever you create a new world, it is randomly generated in its entirety with no set boundaries. The thought I am having is what if there was a preset boundary - more elaborately - the entire region of New England. The idea is that whenever you generate a new world, you have the base New England region boundaries but everything that is generated inside this region is random (city, trees, caves, bases, etc would all be randomized inside the region). This means that it doesn’t matter how many new worlds you generate, if you go far enough east or south (depends on where you are currently located), you will always reach the North Atlantic Ocean.

Of course this would set up a few issues such as what if you go west or north far enough, how would you limit the player from exceeding the range of the NE region? To that question, I have not the slightest idea. I am not sure how clear I am making my point so I will use an image. The base world generation will be the same every time (determining just how large the region is game wise is something else):[/size] 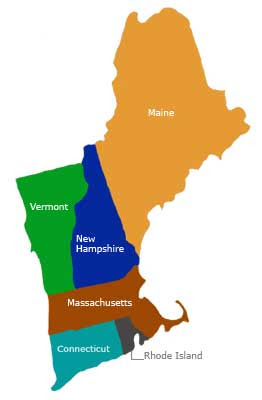 [size=8pt]This would never change, however, everything that is generated inside will be randomized. I am of the opinion that if this idea were to be more fleshed out, it could serve well by further enhancing immersion as well as back up lore game wise. Not being a programmer, I have no idea just how feasible this is as far as Cataclysm: DDA goes. It is just a thought and I apologize if this has been suggested before though I did do a quick search/scan and discovered nothing.[/size]

Interesting, but I’d rather have this as a worldgen option than as the default. Also it seems like the base map is much smaller than the whole of New England would be, so unless we’re scaling everything up this only becomes visible if you have a character that treks over multiple map screens,

Once we manage to get overovermap support in (which would allow for definition of large scale biome types) this will almost certainly go in in some form or another, but for now it’s on hold until said support goes in.

[size=8pt]I like to think that the game is about choice as much as anything, so if this was to eventually get added I would suppose it would be changeable in the options menu. It would also be nice if, once it made it into the game, if there was a way people could do their own border maps to go with mods. Wishful thinking and all.[/size]