also, i noticed that wearing 2 slings is useless now, i wanna cry e.e

lastly, dropping items on ground is very slow… i unload one pine bough per second

Another minor thing related to needles: you can’t reload them if thread isn’t in inventory, before was possible to do that 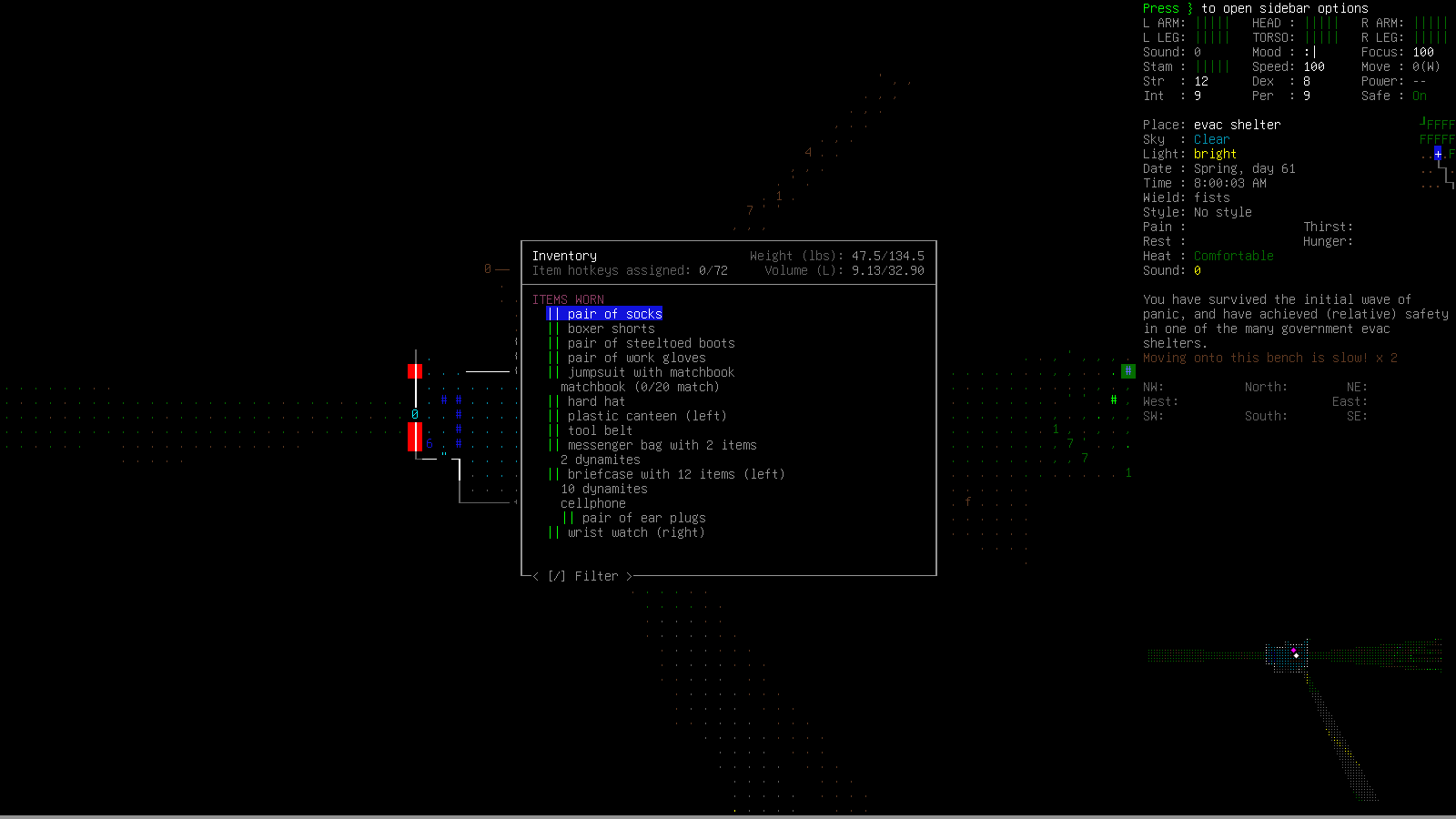 Perhaps it was a bug that has been fixed. Try updating to latest.

I was able to figure it out I had to update my launcher I was playing off a older build lol. Ty

No worries. One good thing came out of this tho. I had last updated to version 10636 and was unable to make any sense out of the whole thing. So I have been waiting (and not playing) for enough bugs to get fixed to make the game playable again. I only just downloaded 10691 to check if the inventory was displaying properly. It looks like the game has reached that point, so I am going to start playing again.

Ah, do we not have a sorting menu for it yet?
Nice start. Do hope to see progress on it too though.

is there a way to prioritize containers? like, have things go in my Survivor Rucksack first, and then into other containers?

It sounds like it’s time do dive into this build? I’ll bid 10614 farewell, and try out the new nested-container-world!

not yet, but i’m planning on picking up that project fairly soon; though i want to get some magiclysm content updates out the door first.

but i believe there is a big improvement happening for it… and lots of fixed bugs.

Noone it TTNQ knows so I’ll ask here instead.

But is there a way to pick up stuff not from under your feet(or your inventory) into worn container of your choice?
Imagine if AIM allowed switching to container mode and using something like “>” and “<” to enter/exit specific containers.

Also, does anyone have even the slightest idea what the friend is happening with my survivor rucksack? It’s not even full but it is already way over its volume capacity… as a whole. Its single pocket, OTOH, is not. 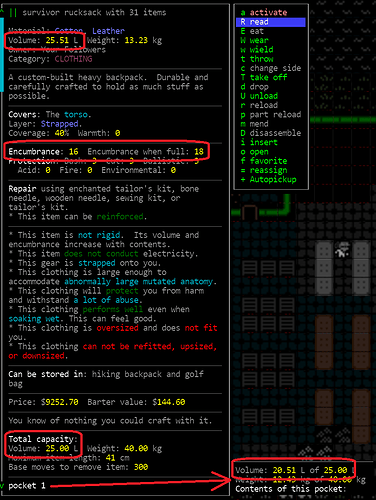 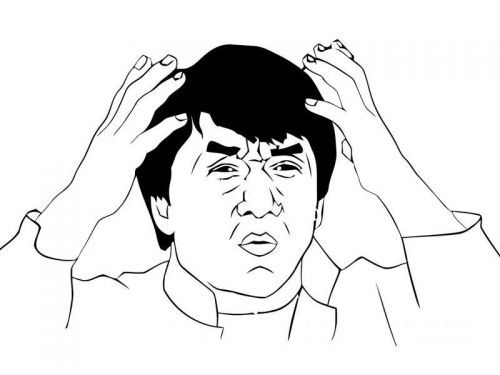 Wouldn’t that topmost volume value be the exterior volume, rather than the volume of the contents?

@pleegwat is right: The Volume shown on top is the volume of the Rucksack itself.

The Rucksack can store 25 Liter of items in it. At the moment, it stores 20.51 Liter. It is 4/5 full. The Rucksack itself has a volume of 5 Liter and since it is not ridgit, it starts to grow as you fill it.
When it’s fully filled, you’ll have a Ruckack with a overall volume of 30 Liter, filled with 25 Liter of items.

Thanks. That was driving me crazy.
It leads to another question, though. Rigid containers. Are they exclusion to this rule, or just not yet updated to follow it? Because their exterior and interior volume is exactly the same, at least that’s what I saw since updating to NC builds.

Rigid containers. Are they exclusion to this rule, or just not yet updated to follow it?

Stuff like alumin(i)um cans, cardboard boxes and glass/plastic bottles? Yeah, it’s weird. It would make sense for those to take up more space. One could argue that cardboard boxes add too little extra volume if they are tightly packed to hassle with adding that in, but for plastic bottles… Those are usually not filled to the very top and should take up a little bit more space.

I don’t know if changes about these things are planned. Probably not - or at least not as high priority.

Found something else. Max_item_length is not defined for any items/armor/storage except golf bag and debug space. It IS calculated somehow in-game, probably from container’s volume or w/e. But the result is, you can’t store any 2h gun(*except those also not updated because they get autoassigned lengths about 10-20cm) in anything except the golf bag. Yes, you can use back holsters and/or wear the guns themselves, okay. BUT! Without the almighty golf bag you can’t even gather branches except wielding each and every one in your hands! What kind of madness is it? Just an oversight or intended behavior?

Oversight. None of these values existed previously, and json updates are tedious, so a lot of stuff is still using its default computed values because nobody has found the time or desire to both produce and justify the numbers.

While i love the nested containers concept the bugs introduced by it discouraged me to update from the 10613 build. Now i want to play again, can someone confirm the bugs are gone or at least the game is fairly playable? What about the Advanced Inventory Manager, is it usable with the nested containers?

The game is playable, but prepare to lose all charges from pretty much anything which is not a worn or liquid container after update. Things like USBs with software, welding tanks, cash on your cash cards, lighters, inhalers and so on. Oh, and also a thing about gun magazines: if you don’t want them to vanish, unload them from guns. Same with belts in vehicle turrets, unload them too.
AIM is working okay, it sometimes dupes the last item in a bunch and sometimes refuses to move all stack with ‘M’ but other that that it is fine to use.