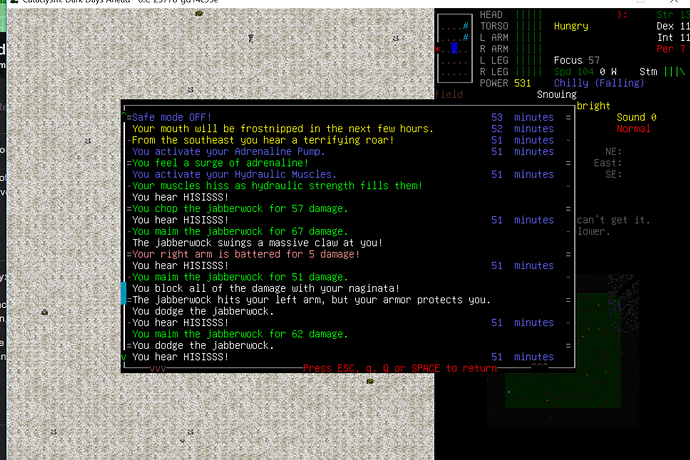 Screenshot (12).png1452×970 550 KB
as seen in the log here, I was dealt five damage by a jabberwock to my arm. I was wearing a heavy power armor when fighting it, and that has nearly a hundred cut and bash protection iirc. How much damage do these bastards deal, and is it recommended to fight them in melee if you aren’t heavily protected?
Coolthulhu May 5, 2018, 2:29am #2

Which mods?
Mainline wocks are rather wimpy, but I’d expect PK variant to be buffed.

Not PK(heard it was more lethal than basegame, didn’t play with it.) As for mods, zombie strength is normal, and I’ve got most baseline mods except for exclusions, filthy clothing, and dino mods.

I believe that particular attack has armor piercing, so it’ll hit you even through Heavy Power Armor. I fight them in basic armor all the time and do perfectly fine. The attack itself wouldn’t do much damage even if you were wearing say, a Survivor Trenchcoat. I’m not suggesting you try this out, though.

Also, Jabberwocks are probably among the top five most deadly non-robots in the game, along with the Shoggoth and the Zombie Bio-Operator. If you know what you’re doing, they actually aren’t too deadly (most of a Bio-Operator’s power comes from its Zapback ability). Like Coolthulhu said, they’re actually quite wimpy.

PK Mod variants are slightly more dangerous, because they have the psionic Fear attack that the Amigara Horrors have. Any badass survivor can take down 9 normal Jabberwocks at a time. It’d insanely hard to take down 9 enhanced Jabberwocks because of their stacking paralysis.

Luckily, you pretty much never naturally encounter more than one Jabberwock at a time.

Cant wait to try out the acsension mod when i retire this character, as EVERYTHING is going to kill me, and Ive learned so much for this character that i’ll be ready for it. Probably. Also, just found a hauling frame, so I never need to take this suit off ever again. I will follow in the steps of Marloss Man!