How did your last survivor die

Tell a story of how your last character died.

My last character died of a heroin overdose while wearing nothing but a towel and attempting to beat a hulk with a stick.

Mine was attack by a zombie while he had 3 backpacks on,
Never stood a chance.

I tried to test something and turned “Realtime turn progression” on, set to 0.05…
…Apparently, the lowest setting is way faster than what it was in 0.C…

I couldn’t even see what hit me.
Note to myself for next time: First mutate the debug invincibility, then do stupid stuff like this.

Also, be aware that there’s this topic already:

How did you last die? The Bunker

For example: My last death was quite accidental. Being that I died from a grenade I activated in my shelter while trying to turn on my flashlight to read.

Began in the mansion and cleared it out with no sweat thanks to the plate armor and katana, saw a bandit household nearby and began walking with no fear. Managed to step on the single mine they had

Ohh i didn’t even realize that this was already a topic thanks for notifying me.

In my world, Toonerville, my last character Landon Polanco died on the road, surrounded by zombies. Only lasted an hour and a half in the Cataclysm.

It’s been a while…but I think the last time I drove into a horde. Would have worked pretty well, but there was also a necromancer or two nearby. Vehicle was destroyed and plenty of the previously killed zombies rose up with a vigor to punish me for my ignorance.

I was on a new survivor like third day, had more than enough water and food to last me for weeks and a few skillbooks I could read so instead of building up my skills. I tried to solo a city with a crossbow and a nailgun. I was promptly chased out of town and eaten.

XD oh boy…I’ve never been brave enough to use a nail gun to clear out a city.

Not the best Idea I’ve ever had, I even had an npc in full scrap armor that was healing up back at base, lucked out on the early game dice roll with my evac shelter npc. All I had to do was bide my time but noooo lol I went and did that xD

My char just cleared out a small city. She was banged up pretty good and one leg was broken so she turned down one street to head to a pharmacy she saw down the road to get some supplies. Apparently she missed that block and before she knew it, glass was breaking all around her as zombies poured out of storefronts and from out of houses.

She couldn’t get away from them so she drug herself to the closest car she saw & got in. Trying to hotwire the car while zombies pounded on it from every direction got her frazzled and she ended up setting off the alarm. Any zombie doubters were convinced by the sound and joined the horde smashing her car. In the end, they punched through the windows and her fate was sealed.

There must have been some sort of cyber rave going on, during the outbreak; because my survivor came out of an alley to meet what must’ve been two dozen shocker variant zombies. They made him ride the lightning.

My last character was a retiree named Yee Minor. She had a good grind going, especially when she found that gun, but in a chase with a smoker zombie she couldn’t outrun it. 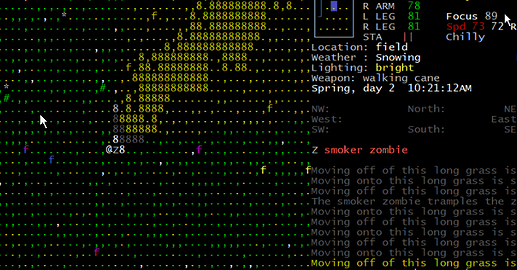 Was a complete idiot and thought I could burn out a zombie horde within the mall. Ended up burning the horde as well as everything else, including me.

Ran out of gas in the middle of a swarm of giant ants. Didn’t go down without a fight, at least.

I recently had a character die by drowning as she had armor on that made her almost invincible. Being the absolute genius that i am i thought it would be a great idea to clear a city with only wood axe. Lets just say that a brute was not so happy about little old me strolling into town thinking i’m immortal. The brute promptly flung me into a river where i sunk like a rock and died. I think that’s the first time i didn’t die by the undead but by my own ignorance.

a wood axe? really? you really were making a grave mistake. Use an actual weapon, or at least a fire axe which is a better weapon than a wood axe (it does 6 more cut damage has same bash and hit bonus and takes slightly less moves per attack)

just one letter off from maybe, having a chance (nailgun rather than railgun)