Hey, welcome to this forum.

Mainly created as a means for inspiration and advice on your ideal home in the End Times.

Playing the game for awhile I’ve noticed a lot of places has it pros and cons.
The Underground Bunker is a secure location for any would be prepper, but lacks sunlight for those wishing to go solar energy.

A cabin in the woods is nice and cozy with room for improvement, but is exposed to the elements and quite flammable for those careless enough to play with fire.

Wish to rough it and survive off the wilderness? sure.

Wanna live dangerously and set a home base in the city? go for it.

You decided to build around an un-exploded nuclear bomb? You’re crazy but you got style, so RESPECT!

So come share your experiences or ask some questions, if your a newb looking for some advice or a pro needing inspiration.

So welcome to the Cataclysm.
May your Death Mobile be ever Steadfast and your Homes ever Sturdy.

I’ve spent a lot of time living in the closet of a public works building on a multi year character some RL years back.

Nowadays I generally just make a Lewis and Clark style pirogue and live along the river, sleeping in a hammock in that.

I usually live of underground bunkers. Tho before I discovered those, I tried to make a home out of evacuation centres. And currently, this thread make me think of trying out Military Outposts. Wow, I just really thought of that right now, am so slow.

Has anyone ever made a home base from scratch?

Surface floor of a lab, I modded it to have solar power, a workshop/storeroom, a massive smoking room, a bedroom/study and a bunch of guest quarters. 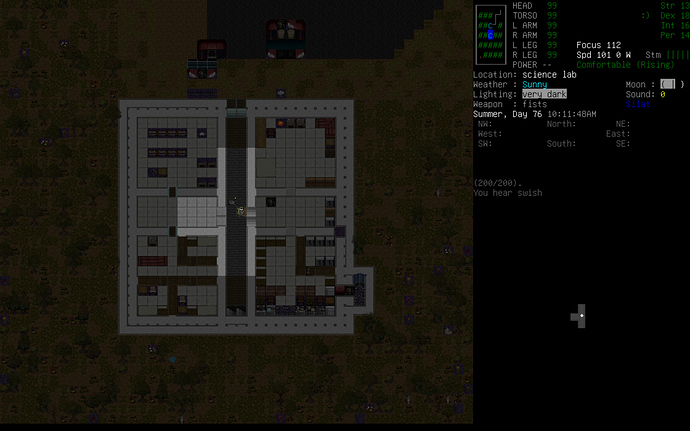 There was also this one, not exactly from scratch but a lot of it was tunneled out by me. Complete electric grid for it too. 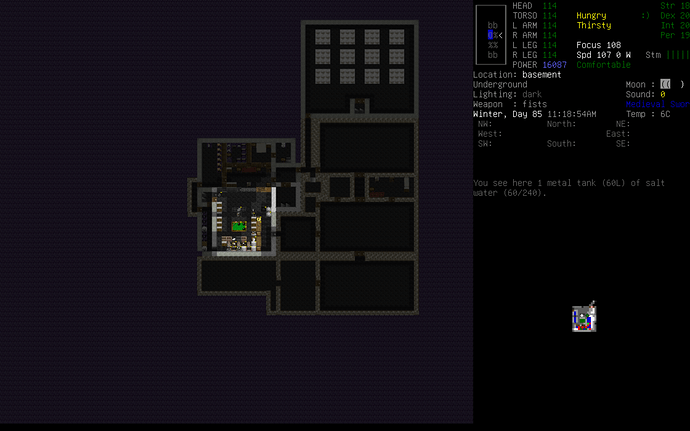 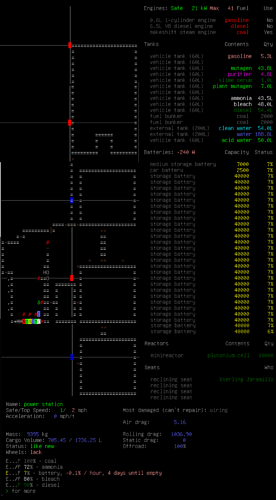 My most recent char ended up on an island in a huge lake. There are other 2, 3 or 4 overmap tile islands dotted around where she has been gathering materials and supplies. There’s even an island prison and a few lighthouses out there to loot, though she hasn’t tried tackling the prison yet.

She was building her own cabin at one point, though while island hopping for supplies, she happened on one island with a house, smoke shack and small boat house already built, so ended up moving in there.

She’s still using fire, but has been scouting the lake shore for places where she might find solar panels and other supplies to bring her up to more modern living.

That’s amazing. How long did it take to dig out those tunnels?

A island home sounds pretty relaxing, a defendable.
What did you use to get around?

I started with a raft she bodged together and gradually expanded to carry a little cargo. Eventually found a marina on the lake shore that had a motor boat,which is now her heavy hauler. When I found the island with the house, there was a proper canoe/kayak tied off at the boat house, so I now use that for scouting to save the motor boat’s gas.

Public works was my favorite place too, spent most of my time on first arrival using the materials to build a wall where the opening in the fence was.

Lately I’ve taken to the swamp hermit shack to be my home of choice, plenty of food nearby with the mutated fauna, and an easy source of wood, ability to make charcoal, smoking rack. It’s a nice place.

My favorite character start there is the Historical Reenactor, helps me live out my inna-woods fantasy.

Quite a while, that picture was taken toward the end of winter in the first year (iirc). Obviously I was doing other stuff as well but I’d do some digging with a pickaxe whenever I had spare time before it was time for me survivor to sleep or inbetween mutation sessions etc. I didn’t mind though, I was using the coal I found while doing it for fueling my power network and the rocks to build stuff.

I did quite a few big projects that run so I had plenty of downtime to work on the base, here is a few months later after I got the underground farm set up: 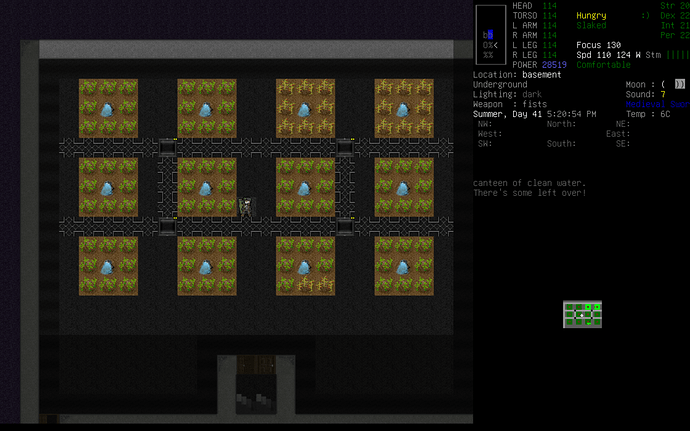 Holly&#39;s progress 821680×1050 410 KB
It was a bit of a waste because hydroponics became availible at around that time but I still liked it, it eventually became home to my own team of Xmen 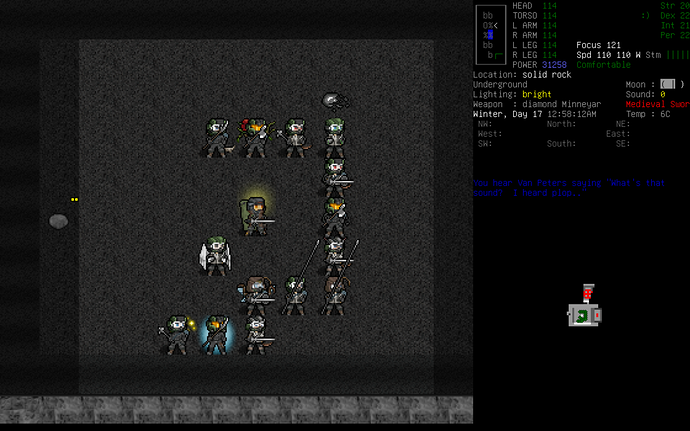 She kind of is! Plentiful food from all the fish and fruit trees/bushes. Now that she has a ready built base, time to read so she can begin making more advanced structures, gear etc… Her biggest problem seems to be an infestation of jawed terrors around her island. Spears and slingshots deal with them easily enough for now though.

Yeah I’m a big fan of the hermit shack nowadays. I do like how you can easily disassemble and move the sandbag walls as well. It’s also already set up with a charcoal kiln and smoker which is just gravy.

I’ve spent lots of time buiding a base in the starting Evac Shelter. The main advantage for me , is that just in case my character dies , a new character will already spawn in my base and be able to quickly gear up and go after my dead character body to recover useful items in case i had any.

The main concern people have is the Evac Shelter being made of wood and being vulnerable to fires - But getting a brazier/wood stove is pretty easy since campsites and homeless camps are pretty common. And as if that wasnt enough , you can also dig a pit and start fires outside of the Evac Shelter.

So being able to go full solar powered , mostly away and safe from towns and having a infinite low light source makes the starting shelter ideal for me.

Not to mention how easy it is to trap the doors, I used to get a shovel and spike pits I made just outside them. Wasn’t uncommon to find dead raccoons or foxes in the pits by morning.

In case people don’t know already, you can lay a plank over a pit to avoid falling into it, and just recover it when you’re inside.

A small village near a lake with a few NPCs has always treated me well. Until I actually have that I usually live in a small hut next to a lake or river.

Not that it’s necessary but in every game where I’m unrestricted in my actions in the world I eventually end up building a castle and surrounding it with various structures and encircle everything with a thick wall that would simulate a medieval city. I’m even busy wih one now, though it’s going to take a while to build one of respect so I apologize for now screenshots at the moment.

Building the city and recruiting a bunch of NPCs to fill in their rolls from blacksmith to farmer and everything in between isn’t hard, it’s mostly a matter of time. Currently I’m recruiting for my order of knights and have several sets of armor and armaments ready for whatever NPC has the stat ranges I’m looking for. I’m fortunate for disabling their needs being an option, as I don’t think I’d be able to keep them all fed and healthy with how cataclysm currently handles things.

I’ve always liked mechanic garages and the like. I can’t remember the exact name of the lot I last had a base in, I think it was a car scrapyard. But I loved having an interior space for sleeping/cooking, a nice big garage for retooling my deathmobile, and the outdoor area to drop off vehicles I’d bring home to strip, and any other miscellaneous projects I wanted to maintain on the side.
Whole place was surrounded by barbed wire fence that the odd straggler would get caught up in, and it had immediate access to a stretch of road that would lead into the city for scavenging trips.
Anthill some ways south made winter survival easy with all that food, too.

In short, I like bases with an industrial feel.

My favorite house of all time was a trailer that had clearly been used for trading drugs - barred windows, chain-link fence around the perimeter, etc. It was nice to know I wasn’t going to be murdered inside the house and, once I’d cleared out any zombies liable to break through the fence, I could go out into the yard without feeling like I was just standing out in the open.

I do love cabins in the woods, though. The woods are gorgeous and the cover from the trees is really handy, especially if you have roving monsters nearby.