Gruesome Scenes of the Cataclysm and of Humanity

I was conversing with my friend, Hibou, about adding some scenes of the Cataclysm, like coming across a suicide cult where there’re a ring of corpses hanging, or perhaps just something as simple as finding a dead body with an empty gun next to it and blood splatters around it. I feel that they’d add some realism as to how people reacted when the Cataclysm struck, and also gives an insight to the psychology of people in danger of that magnitude.

[ul][li]Finding a bloody pulp with a nearby trail of blood leading to a baseball bat or some other weapon.[/li]
[li]Very rarely, a player could find a basement with some messed up scene in it, be it a bunch of raw human meat, or a dead body with a bunch of blood splatters around it and various tools that could be used for torture, or even a secret sex dungeon, why not.[/li]
[li]Finding a dead body on a bed with a mess of pills on a nearby nightstand.[/li]
[li]Maybe one room with a boarded up door, which contains a dead body and other evidence to suggest suicide.[/li][/ul]

We already have scientist/soldier/gang corpses, but this is even better. Enthusiastic thumb up!

Although some people might not like the depressing suicides ect. so maybe have an option to turn it off

Bound zombies: some people held out for a cure, couldn’t bring themselves to suicide, couldn’t stand to kill family and friends, needed research specimens, or were arrested by auto-cops.

Bound zombies have no attacks and minimal movement, but make some noise from the groaning/struggling when seeing prey. They’ve a small chance to break out of their confinement while struggling, spawning some other zombie type when this occurs (monster type being the easiest way to implement them, assuming nobody wants to code an actual bondage system.)

… assuming nobody wants to code an actual bondage system.)

Probably will wait till NPCs get fleshed out.

Last I heard, functional restraints and tranquilizers would be unlikely to make the cut due to being too creepy (not ‘Halloween’ creepy, ‘perverted’ creepy).

I do like the idea of a rare “chained” zombie, though, for atmosphere.

I’d like to see a church filled with empty plastic bottles on every corpse, and jugs of bleach, or ammonia, or whatever the current most poisonous consumable is.

By the way, drinkable poison really needs to be put in the game. I know it’d be useless against zombies, but if a person wanders into Jonestown and drinks the free kool aid lying out, they deserve it.

thats disturbing XD…but i will like too see somthing grusom

Would love to see gruesome scenes like these in Cataclysm, and possible even have a morale adjustment when you look at them within a certain block radius.
Could have it trigger a message, ranging from “This really bums you out” to “You are absolutely disgusted”/“The very feel of this place terrifies you”. What of morale boosts though?
What if a scene is absolutely hilarious, even to a non-psychopath?

What if a scene is absolutely hilarious, even to a non-psychopath?

Honestly if just more scenes in general were put in, I’d like that.

Telling it from an oldschool Fallout perspective might… set the mood.

You arrive at a peculiar crater. Peeking over the mound of dirt, staring down at the crisp, charred ground caused by a fierce burst of energy, you see... A long since dead body covered in leather scraps and the dirtied remains of what looks like a jumpsuit. Next to it, on the ground, you see an unusual looking, battered, orange PDA device. Fur litters the crater. Fur, and large spatters of dried blood. Is this before or after the Shoggoth merged with a Milspec Turret starts talking about his superior Zombie Brute army?

[quote=“Krutchen, post:13, topic:6678”]Would love to see gruesome scenes like these in Cataclysm, and possible even have a morale adjustment when you look at them within a certain block radius.
Could have it trigger a message, ranging from “This really bums you out” to “You are absolutely disgusted”/“The very feel of this place terrifies you”. What of morale boosts though?
What if a scene is absolutely hilarious, even to a non-psychopath?[/quote]

Good news, everybody. After some fiddling around with player.cpp and game.cpp, as well as making a new trap definition and whatnot, I’ve got Gruesome scenes working to some degree.
I’m going to be messing around with it a bit more, but as it currently stands, they trigger on discovery like a trap. I think I might have the intensity of the morale penalty scale by range, so higher perception characters can “brace” themselves a little bit more.

Throw me suggestions on some of this stuff please. I’m going to do my best to make this modular to some degree when it comes to being put in, but that willll take a bit of time as well. I’ve got to find a way to change the “Intensity” as well so that we can make some scenes nastier (to the sane) than others. I’ve got a few ideas, but I’ll keep an open mind on how to do this. 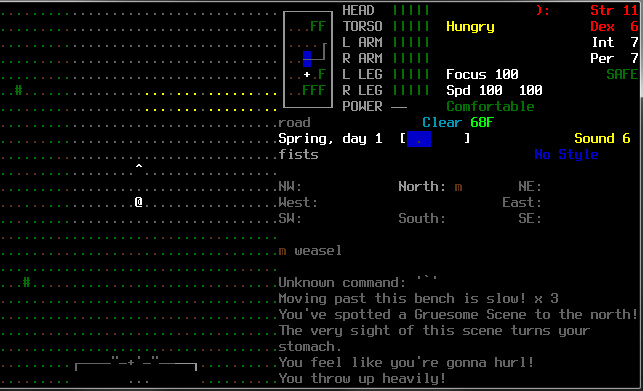 Oh, and the red stats are the result of both the morale penalties and the shakes from seeing said example gruesome scene.