Having taken a look at this GitHub I thought I’d expand on the idea a bit, even though it wouldn’t be a big faction. In theory I’d like to take a stab at creating the NPCs, but a) I’m lazy and b) I’ve only skimmed the NPC/mission docs thus far. Also I’m not sure from previous discussions how much procedurally generated backgrounds are favoured - is that just for random NPCs, or for faction ones too?

Gods Chosen
A religious end of the world sect - but this time a good one.

Name:
Names are the hardest of these type of thing, but I’d lean towards something more inviting than God’s Chosen, on the assumption they want to recruit a little and save peoples souls. IRL names like “The People’s Temple”, “Aryan Brotherhood”, “The Family International” etc have more of a community feel… Radiant Family? Heaven’s Flock? Or something related to humility?

Origin:
The Founder was a retired doctor - when bionics started to be embraced by civilians he grew sick of what he thought of as humanity’s hubris. He wasn’t devoutly religious before, but began to obsess over doomsday theories and create his own theories. Prior to the cataclysm (~4yrs) he bought a mansion and brought his family there, along with another family, the idea being to get away from the decadence. He died a couple of days before the game started, either due to suicide or a hunting trip gone wrong. His eldest daughter has since taken over running the sect.

Base:
As survivors would fare best in a more remote location I’m not sure a cathedral/church would work - they can’t currently spawn remote and it wouldn’t make much sense for them to be either. I think a 3x3 mansion would be a decent base for them, one they occupied before the cataclysm and were able to hold. Anything decadent would have been stripped from it (it was bought with the idea of a commune already), and they’d have more simple belongings, and of course boarded up windows/doors etc. They would have a communal garden out back and a rain collector but they probably wouldn’t have things like a forge or welding station (at least at first) as they didn’t entirely think though the whole end of the world idea. They’d probably have chickens for eggs and maybe a couple of cows but would shy away from raising animals to slaughter.

If the founder wrote a manifesto pamphlet, a survivor could find one in the ruins of the city and have the base marked on their map, much like the refugee center is in evac shelters (albeit probably not with the roads to get there marked out).

Beliefs:
God (loosely a Judeo-Christian one) has punished humans for their arrogance (especially regarding bionic implants) and let loose a literal hell on Earth. The original zombies were insufficiently humble and good in their life and later infected everyone/thing (hence zombie animals), and nether creatures have been sent from the Underworld by God (the sect aren’t really aware of lab experiments). Leading a kind, non-violent and ascetic life can prevent later zombification. As New England is the epicenter for the current chaos, they also believe that it is the spiritual center of the world.

They are strongly against anyone with bionics, or anyone who willingly mutated. They are suspicious of any mutants, but will reluctantly accept them if the individual will seek out purifiers etc. They reject most technology more advanced that this current world - i.e. anything powered by plutonium cells, or any advanced robotics.

They believe in pacifism, so have relatively few weapons - a few for hunting (although they only eat animals if necessary to survive), as well as ones they scavenged after the cataclysm to fight the zeds/nether creatures. They don’t believe in drugs besides very occasional alcohol and possibly hallucinagenics. They don’t believe in money, they prefer bartering - not just in the sense of goods, but also of time and favours - you can have this food if you help build a wall here, or if you vow to return with medical supplies or information.

Social Structure:
The faction is theoretically one based on equality, but in reality the Founder’s eldest daughter Helena is the leader and the Founder’s family (the First Family) has the most sway, followed by the Second Family. Beyond that you have people who joined after the cataclysm - perhaps one other family, a couple, and a few single stragglers who may or may not be particularly committed. Everyone who officially joins wears a rough iron ring and slowly transitions to wearing identical plain (but functional) clothing.
They allow people to shelter with them for a week or so without joining (so long as they help our), but beyond that will pressure them to join.

Faction interactions:
They would never kill any human except in direct self-defence.
Positive: General survivalists, Fence Men
Neutral: Free Merchants
Negative (albeit not actively hostile): Hell’s Raiders, The Old Guard (for being percieved as getting us into this mess) and any group that promotes bionics, mutations, or interactions with the nether creatures.

They would have a reception room that any faction could access, though without taking any objects. Factions who they have positive relations with would have access to a basic dormitory and a small amount of supplies. They would attack any monsters that other NPCs are being attacked by, but probably not get involved in fights between NPCs unless one of them was a member of the sect.

The faction itself would have three levels: Those who are taking refuge there but haven’t joined (allowed in dorm, garden and general ground floor rooms), those who have joined (also allowed upstairs and in the basement, can take things freely), and those who are part of the First Family (can go into the crypt, where the Founder is in a stone coffin)

Regarding nether factions, or humans aligned with them: The only ones who are actively interested are the Mycus, as they see them as potentially easier to tempt.

Goals and Missions:
They want all survivors to renounce hedonism and decadence and be converted so they can ascend to paradise, though they know its unlikely. They don’t have any interest in physical expansion.

The primary mission-giver would be Helena. While their beliefs are not quite in line with any major religion, they do want to collect religious texts to pour over for hints of Truth, so retrieving these or human artifacts from cathedrals/churches would be minor missions, along with securing the base perimeter and anything that would help survival. As they are looking for divine inspiration, they may also want you to get some hallucinogenics. They may also want you to find where missing members went (and retrieve their ring if they died).

For later missions they would want you to proselytize members of other factions, especially merchants, ex-convicts or survivalist types. This could be via convincing conversation, or by spreading sect pamphlets the Founder wrote before his death (perhaps “give out 20 pamphlets”, then a later mission to actively convert someone). As they see bionics as a major cause of the chaos then destroying any found bionics or destroying autodocs would also be a possibility, as well as destroying things in labs.

Since they aren’t all homogeneous (despite what Helena and the rest of the First Family would want) there would be other missions that do not assist the sect as a whole - see NPC section.

Additional player interaction:
If you wish to join you will have to not be an official member of any other group (or else lie successfully), have any bionics, or any mutations that you got willingly - or possibly they would request you purify any mutations before joining. You would have to have done several missions for them and have met Helena at least two weeks before you join.

Rewards for joining: you will get a rough iron ring which will give you a slight permanent mood boost for being part of a community. They could teach you skills, but never any combat ones. Perhaps a possibility for trait changing (adding pacifist, truth teller, spiritual. Removing gourmand, stylish, skilled liar, addictive personality), but I’m not sure how it would work.

There’s a PR right now for a new NPC, which shows the typical level of effort needed to create one: https://github.com/CleverRaven/Cataclysm-DDA/pull/29529. It really isn’t that much: add some text to a couple of text files.

I’m not sure what “procedurally generated backgrounds” means in this context. If you add a new faction to the game, you can do what you want, within reason. If you want all your NPCs to get randomly assigned backstories, you can do that. If you want them to have only certain backstories, that’s also an option.

Yes, its not quite a cult (although cults don’t have to be religious) but I just thought “Brotherhood” has a culty-feel to it.

I have no objections to this, with one caveat: Don’t have them preaching out loud constantly, or put in an override or something for their speeches so you don’t get a interruption/notification every single time they say something out loud. Having to listen to the NEVERENDING SERMON of that preacher in Fallout 3 got old fast. Eventually I arranged an “unfortunate accident” for him because of this, but if it had interrupted my game every time he spoke, his remaining lifespan would have measured in seconds after I entered Megaton.

Sounds like a group i would steer well clear of.

So it’s a literal cult, but you want them to be super nice and benign and not at all horrific incestuous rape camps like pretty much every actual cult.

Well its early days of the cult, most cults don’t start with horrific things right from the off. Potentially as the cataclysm continues then members could start acting more warped, especialy if they believe hallucinogenics hold some sort of sacred truth.

Also there are some communes that can be a little culty without becoming evil, my uncle was a part of one that was basically a hippy commune.

I am interested in the idea. I’ve already done some coding.
I did some changes, so they no longer have ‘The Founder’ or live in a mansion, or accept drugs.
I also renamed them God’s Community.
Here’s the progress:

A pic of her and the camp: 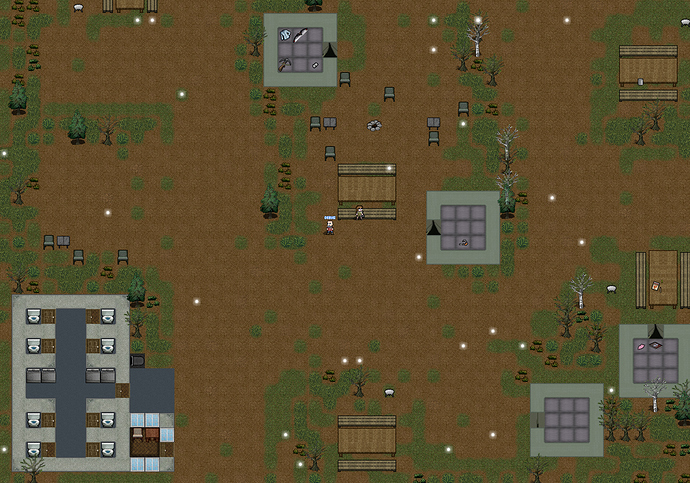 Also, if I ever make a PR about it, expect a lot of spelling errors and more. I hope that’s not a giant problem.

The devs will politely request that you fix your spelling errors and hold off merging until you do, but it’s not a giant problem.

Reminds me of this hippy catholic cult camp ground I stumbled upon when I was a teenager around the southern tip of vermont-ish area. Looked just like that picture and had a lake they either rented or owned. Would have been like every other camp except they had a rule “no outsiders allowed”. Which they didn’t appreciate me being there, looking around.

I think they had a church area too.

There is now a PR which adds something like this, linked here: New England Great Revival by MNG-cataclysm · Pull Request #62061 · CleverRaven/Cataclysm-DDA (github.com)