Does being wet afflict how much you get shocked?

I know an ANBC suit (my favourite) shields me from all stuff. but would being wet under it (from hypothetical sweat) make me get shocked more (from a hypothetical CBM discharge for example )?

I know an ANBC suit (my favourite) shields me from all stuff. but would being wet under it (from hypothetical sweat) make me get shocked more (from a hypothetical CBM discharge for example )?

In the case of being shocked from a malfunctioning CBM; no, being wet (realistically™) will not make a difference since the CBM is inside you, and you’re probably like 70% water anyway; so a little more on the skin isn’t going to make a difference.

Especially, when you consider the path of the current: where it originated (internals) and where it is heading (earth). The current may not even touch the water on your skin if the resistance from the skin (as an insulating membrane) is higher than that of the internal path to ground or the amplitude of the current.

However, if the electrical current originated from an external source; for example a Shocker Zombie - then the ANBC suit would act like an insulating membrane in real_life®, so your wetness would only have an effect if the current passes through the suit (assuming no holes) - and if the current is strong enough to pass through something as highly insulative as that suit, then again it won’t make much difference because you’d still be ded either way.

I have no idea, whether or not this is modeled in game, I’ll have to test it out and get back to you.

Alright, after a highly scientastic test; I can confidently say: “Nah… probably not”

I did this test by summoning a Shocker Zombie to shock me (whilst dry), I then recorded my status. This was done as soon as I was struck by the bolt of electricity. i.e. with the “Zapped” status.

After reloading the save; I took a quick dip in the river, then summoned another Shocker; and again recorded my status as soon as the bolt struck me.

Being wet did not effect the initial pain percentage as much as I was expecting (something like 20%+ while wet). Repeated tests showed relatively consistent results. 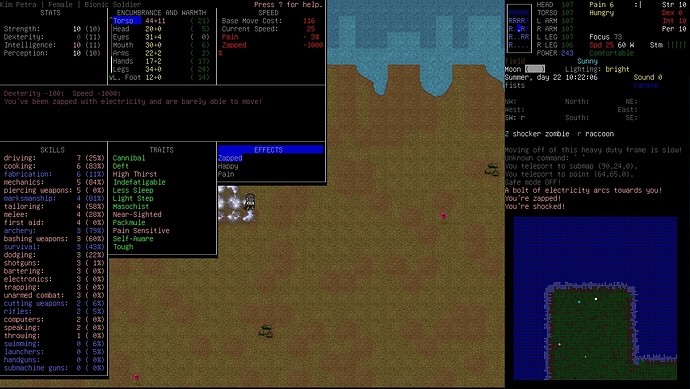 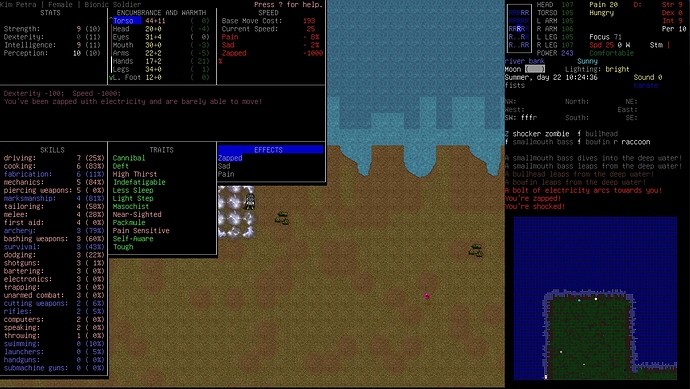 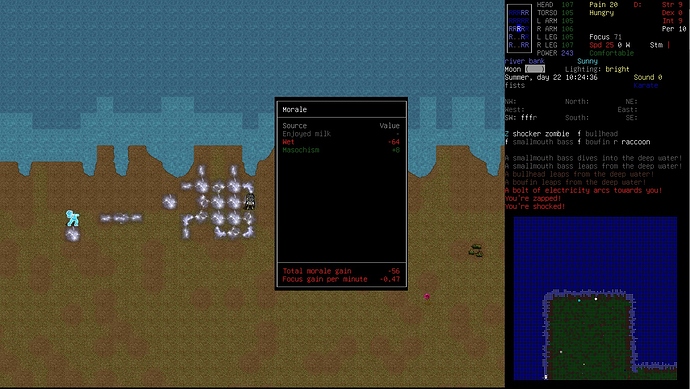 Thanks for the Science!

Although I must say it would have to be a very eager programmer to model this as well. Plus, it means yet another check when something happens (checking for how wet when zapped, direction and strength of current etc).

I agree, the game chugs sometimes as it is.
Can you imagine what would happen if a Shocker threw a bolt into a school of fish. All those checks

If only need how to code better. I mean, reading the source is fun.

But having no clue where to start, and knowing what points to what, thats what keeps me from refactoring code.
Plus, despite having studied this topic for 2,5 years I never practiced much.
Would love to try though.