Previously cash cards stacked into a single inventory menu item, displaying total price. However now they are no longer stacking, making them take up a lot of screen space. 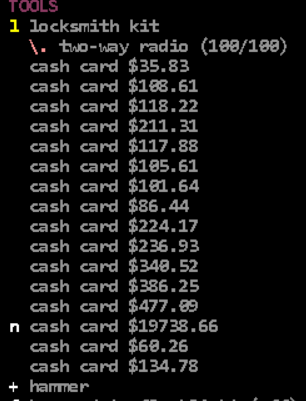 Not just the cards, lighters too

I hope this wasn’t intentional. The consolidation of cash cards was one of the best quality of life changes. I hated scrolling through an entire page of cash cards.

Yeah, but now you can choose which one’s to drop.

Yeah, but now you can choose which one’s to drop.

Heh. Hardly the quality of life improvement we’ve been looking for.

Since it’s now doing it for lighters too, I’m guessing that this may be happening to any plural items that potentially have a variable value/charge.

If nobody submits an issue report for it, I’ll fire up a game and see what replicates this behavior and submit one. I can’t imagine this was intended.

That’s just a regression to old behavior. Should be fixed by someone eventually.

is there not a way to track down the cause of the regression and fix it that much quicker? i really haven’t been having time to play the game at all lately, but i noticed that recently and it’s wow, i’ll just be never picking up any of those items ever again.

Debugging stuff takes as long as it takes, and my employer has first claim on my time during the work week. I’ve submitted a fix but it wasn’t as simple as “map memory is messed up, let me fix that.”

not even remotely a high priority anyway.

There’s always git bisection. Anyone who can compile their own binary and has at least an afternoon free can do a bisect to find the exact patch where a problem appeared. It’s time consuming, but there’s no programming skill required.

You basically tell it when the game last worked right for you, and when you first noticed it was broken, then It picks a midpoint between them and brings up that version of the code. You compile it, test, and then tell it if that point works or is broken, and you wash/rinse/repeat until you’ve found exactly when it broke.

jagoly actually bisected the issue yesterday morning, but I had to work and then it took a couple of hours to debug it and figure out all the causes.

I’m not happy I introduced a show stopper bug, but it was resolved in less than a week. That’s not too bad.

It’s really not. Actually, it’s why I love this game. Found a bug you just can’t play with? No problem, wait a couple of days and download a new experimental. And the “refund” for your wait is usually a cool new feature, like crouching, batteries overhaul, butchering overhaul, multiple ammo per weapon, etc
There’s always something boiling in the pot, as the saying goes in my country

Sh!t…here I had high hopes for the list option I enjoyed and longed for its return…Optional maybe?

Well, seeing each card could be kind of nice if you just want to ditch the zero values ones, or whatever, but it eats up inventory letters like mad, otherwise.

Cant we still load them all onto a single cash card from an atm?

Cant we still load them all onto a single cash card from an atm?

Well, seeing each card could be kind of nice if you just want to ditch the zero values ones

Well, 0 value cards still stack. Although, in my recent playthrough I did find one with a whopping 2 cents on it. This was back when they still stacked, and I was mad at myself for picking it up because I didn’t think I could drop it since they stacked.

I forgot about those. You know you can turn those off in the options right?

I like the list for realism of making me choose which card to use. I can’t always find an atm machine to transfer the funds into one. Makes for good role play for when the function isn’t there.

How do you turn it off?

Options menu has a toggle setting to turn off numbers/letters for inventory. I don’t have a copy on this machine to be more specific. But if you go through each and read what they do it will make your game better anyway. Try the graphics area.