So I started a new world with all spawn-related settings as default and zombie hoards turned on like I always do (I double-checked).

I haven’t played in a while but I don’t remember default spawns to look like this: 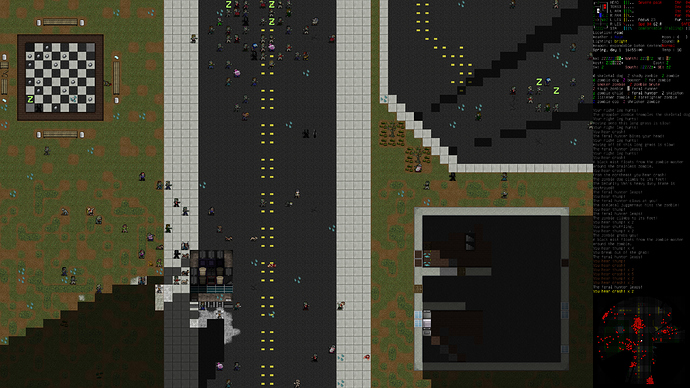 As you can see I was surrounded by 13 zombie hoards, needless to say I didn’t last long…

Looks about right for what I’ve been dealing with. Sure takes a lot of pebbles to kill all those earlygame.

I have heard that spawns are a little testy in recent versions, with monster evolution being the main problem. TBH it could be the size of the town too

The default zombie spawn rate is currently a bit insane, so I find it best to reduce it by half or a fourth. Late starts are essentially impossible as you have hordes of hulks, masters and other top-tier zeds.

I’ve had towns backspawn pretty fast as well. I cleared out a medium sized (~12 block) town, headed south to a smaller ~6 block town and took maybe 6-10 days clearing that out, then headed back north to find that the prior town was almost fully restocked again, which was a PITA.

I cleared out a medium sized (~12 block) town

You meant 12 blocks is “radius” here (something like <<^v>^^vv>>^), or just a approximate number of buildings in town?

Not really that big, I meant about 12 blocks (actual town-road-blocks, sorta 2x2 + roads) total - so a medium small town. It was my starter town, so it took me a good long time to clear it day by day.

Upon returning (for the 2nd time now), I’m in survivor gear and sporting a recently crafted pneumatic bolt thrower and starting my first real deathmobile project on an abandoned APC that I had marked way back on day 2 - so for the most part re-clearing is going a lot faster, though I still have to be pretty careful about hulks or shockers, and I don’t really have a good answer to Juggernaughts until my APC is mobile enough to bring an armored fender to bear.

Yeah, in prior games I’ve gone after them with morningstars, which worked ok. My current survivor is a total bookworm however, with only average physical stats, rather low blunt melee skills, and no martial bonuses, so going toe-to-toe with a Juggernaught is not in the cards any time soon.

So I should probably take a look at my shotgun collection. Probably have something in there that’ll do the trick - didn’t think that shotguns actually did blunt damage?

It’s not he best option but it seems the easiest firearm you can get early on that can handle them that you can get decent quantities of ammo for, you’ll need a decent amount of shells though and need to kite a bit to reload even for one juggernaught but the shells WILL get through their armour, I carried a Mossberg 500 for ages just for those and bio operators.

Ok, so it’s not blunt damage (which they have much lower armor against), but a shotgun is still high enough damage to get through the armor. Eh. That’s something. They are at least so slow that you can basically kite them at point-blank range to get maximum effect out of the blasts.

I do also have access to a small pile of land-mines - I suspect that kiting a Juggernaught over one of those might do the trick. I’ve been strictly avoiding any and all explosives until the shrapnel issues get worked out. Seems like most explosions have a potential survivor kill radius of several screens at the moment.

360 million people and most are dead and have risen. So…seems legit even when it sucks.

A pair of bear traps + a good spear and related skill will work against a juggernaut, too. It takes a while, but as long as you keep one step away his attacks are less dangerous.

I have my refurbished APC all up and running, so that’s the straight up solution to Juggernaughts in my book. Just need a minute or two to buff out the dents in my fender after the ‘battle’, such as it is.

Walking away is also a good solution to Juggernaughts. I’m pretty sure you can outrun them with nothing but broken limbs and slowdown traits.

Leaving them around your map can be troublesome, especially if you then wind up with three of them wandering via horde mechanics and popping up next to your base as you sleep. They can wreck stuff pretty easily.