In a previous world I had a 3x3 electric vehicle (no quarterpanels or anything that blocks movement) with 9 storage batteries and a laser/turbolaser cannon (I haven’t found a Fusion Blaster Arm CMB yet in my current world).
Made a autohotkey script to shoot the cannon with one key.

Guide the horde of zombies to form a column coming towards you.
Wait for zombies to be 1 tile away or be adjacent to your vehicle.
Hit the autohotkey script to shoot the laser/turbolaser cannon and watch most zombies get splattered into tainted meat with a single shot.
For hulks or monsters that have more HP, hit them with the cannon a couple of times while they are far away and make the killshot when they are 1 tile away or adjacent to your vehicle and they’ll also be splattered into tainted meat.

If you don’t want to cause a zombie to be splattered into tainted meat (shockers,technicians,scientists,etc), just shoot them from afar.

I can only assume they get splattered because of a critical hit/headshot due to the range is that correct?

It’s very likely that. I don’t have that save game anymore.
I would rarely miss when shooting from afar, but never from up close. I think I had the Targeting System CBM installed also.

That reminds me, I dont think bomb fragments are gonna gib the targets pretty much ever, but they probably should, hmm…

Possibility of explosives either transforming or adding a debuff to enemies if they lose parts but not die entirely?

If you want consultation regarding fragment mass distribution principles or anything related to fragmentation munitions in general, I can help with that. I know how to calculate the Gurney velocity for any given fragment, just as an example (I doubt that would be considered in Cata but I’m just saying I know my stuff). Whether you want to know the fragment size and numbers for real-world munition or a theoretical one, I’m your guy.

If I can’t figure it out, I’ve compiled >40 documents worth of extensive testing done by both private and government entities, and there’s some research papers in there as well regarding metallurgy and it’s relationship to fragment size and distribution as well as the charge to mass ratio.

I was once somewhat autistic about this stuff for a while, as you can clearly see^

Ugh, where were you two months ago when I started researching this, I’ve pretty much hammered everything out with a selection of papers I was able to dig up.

Surprise, that’s exactly what I did.
I’d be interested in your review of what I settled on.
Here’s roughly what I’m doing:

For the m67 I ended up settling on extremely small fragments, 0.05g, which leads to a large number of fragments, roughly 4,000. Otherwise the fragment field gets too diffuse too fast and damage becomes inconsistent really fast.

I have one question about the whole fragmentation stuff. Will it be possible to use zombies as living shields? Suppose that a grenade explodes in the middle of a small horde of zombies. In my opinion all fragments should stop at the first / second “line” of monsters even if they are just a rotting meat. Fragments should not pass through few monsters. I am asking because a situation in which a given grenade kills 100 zombies seems a little strange to me

Zombies (creatures in general actually) do block fragments, but outside of hulks most monsters don’t fill their squares, so many (half of them for a regular zombie) fragments will continue beyond a monster.

That implies you can use zombies as undead shields, but you need 4-6 zombies in a line to reliably stop all the fragments.

An 11 by 11 square of zombies with an empty space in the middle contains 120 zombies, and each of the 40 zombies the outermost rank has 4 zombies between them and the space in the middle. If a grenade goes off in that space, the first rank of zombies is hit by 100% of the available fragments, the second rank by 50%, the third rank by 25%, the fourth rank by ~12%, and the last rank by 6% - and that’s still lethal to around 30%-50% of them if a single grenade can kill 100 zombies in this perfect example.

Survivors are often tougher than zombies, and better armored. It’s still probably safest to throw grenades far enough away that the survivor isn’t in the blast radius.

Exactly that, though your best option is ducking around a corner of a building as well as having some distance.

Probably not initially, but I’ll add interactions with pits at some point so you can duck down in one and reliably avoid the blast (heck yea trench warfare vs zombies!).

Same with sandbags (the half wall/barricade) I presume right? Just thought of this but if you can duck into a pit to avoid shrapnel, what about gunfire?

Now we need a WW1 mod to add stick grenades and Brodie helmets!

Sooo…UnReal World levels or just “Get Down” kind of ducking?

First the ranged weapon rebalance, now the explosives rebalance Cataclysm: DDA is making a lot of strides! I like how there’s more viable playstyles besides bionic-melee god. With the Expanded Archery Mod and the rebalance archers are far more viable and hopefully being a psycho anarchist is next!

BTW, here’s the aftereffects of a RDX charge in a regional school that was (artificially) filled wall-to-wall with zombies. 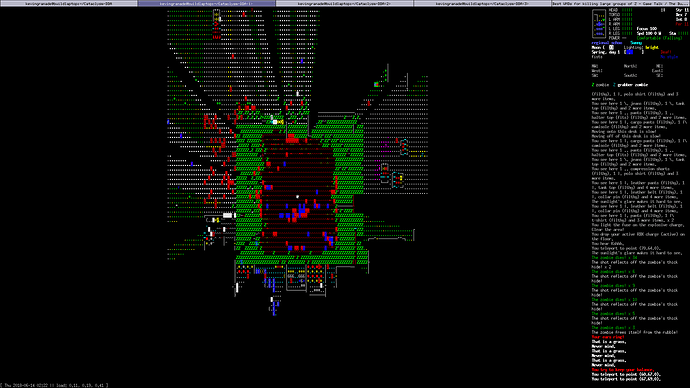 I leave for what, 2-3 weeks and come back to this?

Well, good to see we’re making progress. Also, if that’s what a conventional explosive does, what would a Mininuke do?

And here’s a similar test on open ground, before: 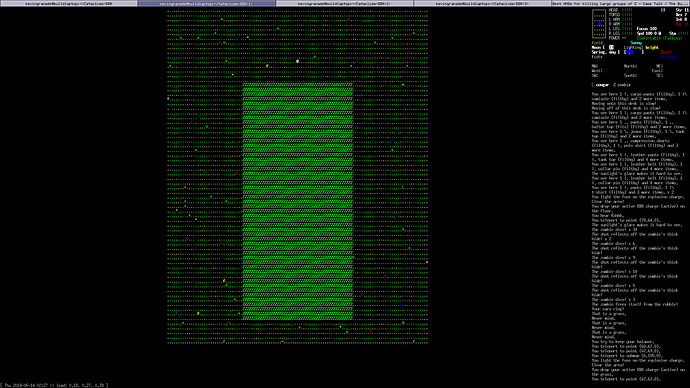 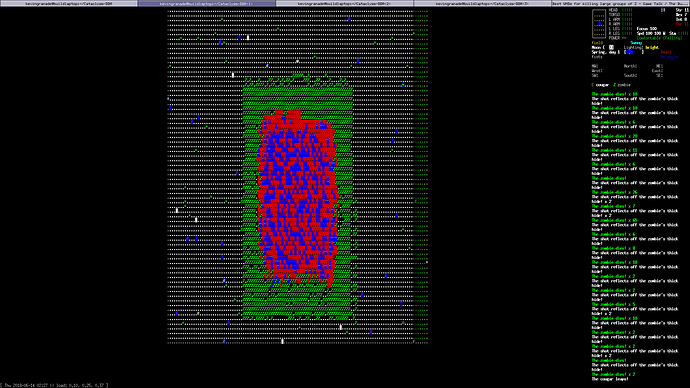 3 posts were split to a new topic: Tactical nuclear devices

You want the really economical option? Just wait till night and set a small building near the horde on fire. You can either get the rush going using an air horn from hiding in the building, or just move down the street a ways and wait for it to start collapsing.

The noise of a burning/collapsing building is sufficient to draw in all Z’s from a several block radius, and they have absolutely no survival instincts regarding fire, so the vast majority of them will shuffle right into the inferno and be neatly incinerated.